Our trip to the Great North Woods, part 5


Time for the fifth and final installment of our trip to the Great North Woods!  This one will cover Thursday and Friday -- Friday being our travel day.

Thursday morning as the mist was rising over the lake, we saw an interesting sight.  A boat docked at the next place over was slowly sinking into the lake!  Apparently it had filled up with water from all the rain.  (The photo below is blurry for two reasons -- the mist, and a secondary reason which I'll explain later.  Those of you who are on Instagram already know what happened!) 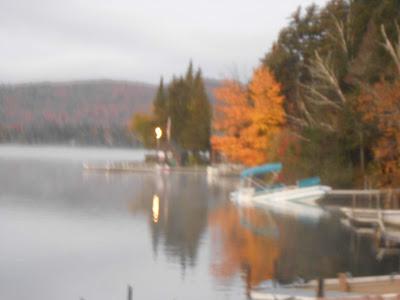 Mr. T did try and find out who the boat belonged to and eventually tracked down someone who knew a friend of the owner.  Presumably he was able to contact his friend and hopefully get his boat pumped out and out of the water.  The dunking would not have done the engine much good.

Our plans for Thursday included two major events.  Mr. T was planning a morning kayak paddle on Second Connecticut Lake with our friend Charlotte.  And in the afternoon we were having longtime friends over for coffee, with Charlotte joining us for this time also.

The photos below are from Second Connecticut Lake. 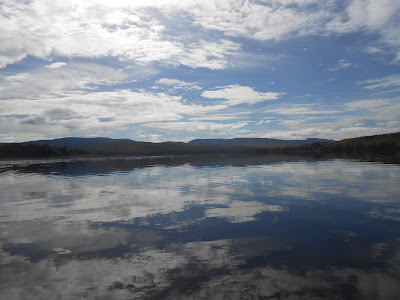 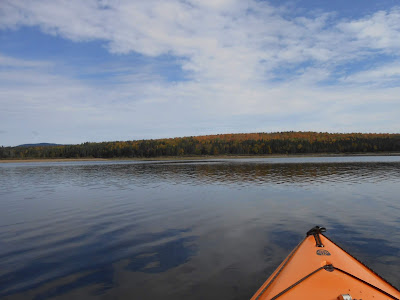 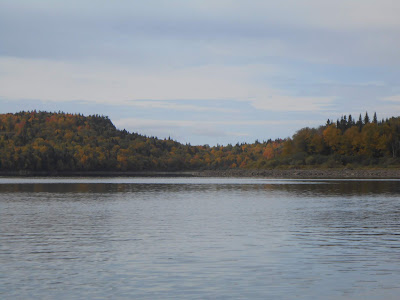 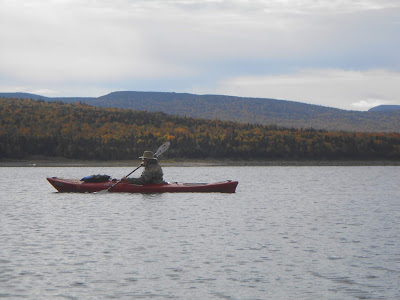 When Charlotte dropped Mr. T off following their paddle, I was very surprised to see that he was soaking wet!   He hurried into dry clothes while I found places to hang/drape the wet ones; then he spread the contents of his wallet on the heater to dry.

What happened?  As he was getting out of his kayak (not his own; he was using Charlotte's extra one), it started floating away and he ended up with one leg in and one leg out of the kayak and landed in the lake.  Obviously the water was not very deep there at the shore, but he got very wet, and so did the camera, which was literally floating in the kayak.

More about that later.  But any photos from here on out would be taken with the Kindle. 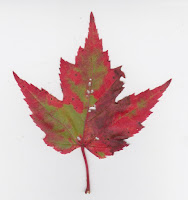 Our friends arrived in the late afternoon and we enjoyed a great time of catching up with them and hearing all about what  they -- their kids and grandkids -- are doing these days.  (Our daughters all went to college together.)  I had made and frozen some brownies and some peanut butter brownies and had brought those along with us -- so we had treats to enjoy with coffee.  Charlotte also brought some cookies, and our friends did as well.

It was a truly lovely visit and one we hope to repeat the next time we are up north. 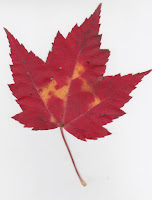 We had another quiet cozy evening in the cabin and even did a little packing.

We'd planned to go out for breakfast on Thursday morning, but the restaurant ended up being closed, so we put it off until Friday.  We always enjoy Happy Corner Cafe, and -- though we could have chosen to go elsewhere, we decided to just wait until they were open.  We knew that even though we were leaving on Friday, a breakfast out might be just the ticket and we would still have plenty of time to  pack the car before we needed to check out of the cabin. 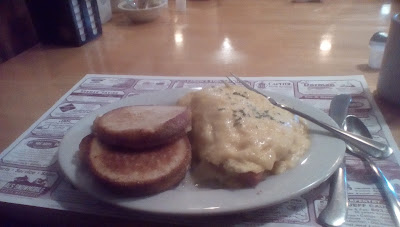 Happy Corner Cafe has an entire page of omelets to choose from.  I chose one I'd never tried before, a Benedict Omelet with Canadian bacon, Swiss cheese, and Hollandaise sauce.  Very rich but oh so good!  I would love Eggs Benedict but I just can't stand poached eggs, so I jumped at the chance to try this.  And that's a homemade English muffin in the photo too.  Happy Corner specializes in those.

Fueled and fortified by this amazing breakfast, we finished packing up the van and left the cabin as neat as possible.  Mr. T tried once again to get some photos of that favorite scene across the lake, but it was a losing battle from the start using the Kindle. 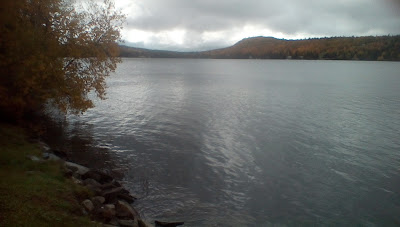 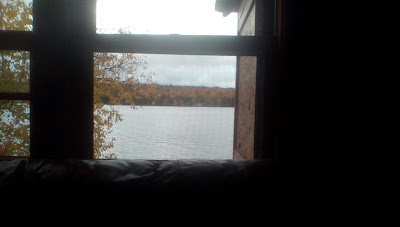 The one above was taken through the living room window. 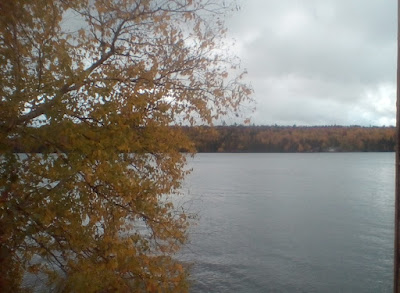 We  then headed out and snapped photos along the way, again using the Kindle, but they came out quite well. 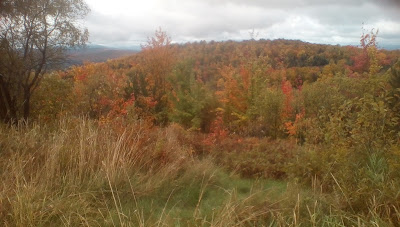 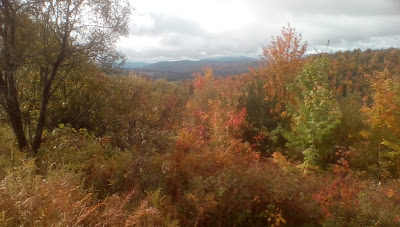 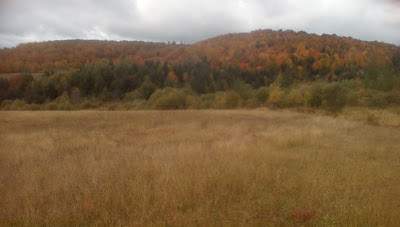 I think the three photos above were all taken along Route 145 in Pittsburg.  We took sort of a back way to Littleton and the photo below is in one of the tiny towns on the route we took. 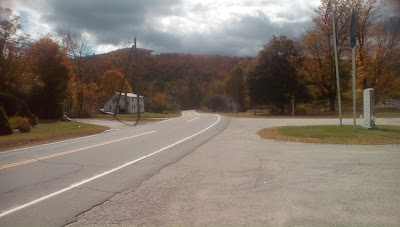 We took our time going home and stopped to do a few errands en route.  Arriving home,  we were delighted to discover that all of the photos on the water-logged camera actually did transfer to the computer.  The first few (like the one of the sinking boat) had obviously been affected by the moisture, but not the others.  Thankfully there were only a dozen or so pictures on that new card anyway.

What a wonderful trip it was!  So many memories have been made.  Hope you've enjoyed following along...
Posted by Mrs.T at 2:24 PM