About our recently acquired cottage ...

Readers have been asking, so I wanted to take just a minute and quickly explain about the cottage we're working on.  It's my parents' camp from back in the day.  We often spent my dad's vacation times there.  It's very rustic -- no water or plumbing, and, until recently, no electricity either.

To look back at its beginnings, this cottage is a piece of New England history -- the two small rooms (a kitchen and a sitting area/bedroom) were portable camps that would have been hauled to logging/lumbering jobs.  Upon arrival at the job site, the two rooms were bolted together!  The wheel wells may still be seen in one of the rooms, and the wheels are still in place under it.  Little platforms were neatly built over the wheel wells.  One held a Franklin woodstove and the other a dresser.

Back in 1949, my parents used this tiny place as a home after they first married and lived in it while their permanent house was being built.  In the photo below, it is the little white building.  The one to the left is the kitchen, and the the part to the right is the bedroom/sitting area.    The window you can see in that part is the bedroom window.  I think they may have had a chemical toilet in the little brown building, which many years later became our playhouse.  In the driveway you see my Dad's lumber truck. 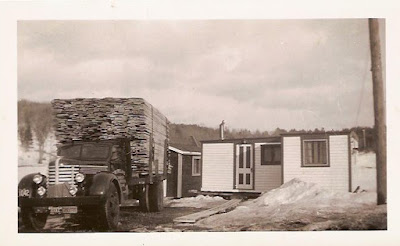 After the house was finished, the camps were moved to property owned by the family in the woods of a nearby town.  So the tiny home became a little two-room camp out in the woods, to which my dad eventually added a large room to serve as living room, dining area, and bunkroom.  As mentioned, the other two rooms were a kitchen and a bedroom with a separate, tiny curtained-off sitting area containing the aforementioned dresser and a little Franklin stove, along with a rocking chair.

My dad had a gravity-feed arrangement for cold running water only, and we had an outhouse.  In the living room was a couch, a couple of chairs, a television, a shelf with a telephone, a number of rollaway cots, an old pump organ someone had given us (none of  us knew how to play it!) and a picnic table with benches.  There were also some boxes full of books (bought at auction) and old magazines.  It sounds disorganized, but it really didn't feel it.  The dining area was in one corner, beside the large screened windows that were covered with wooden shutters when we weren't in residence.  The living room area was in the adjacent corner, and the bunks filled up the remaining side.  The organ was tucked in next to the door to this room.  There was electricity back then, but my parents disconnected it when they stopped using the camp.

My dad also added a screened porch off the kitchen (you can see the deck of the porch in the photo below, which must have been taken before he completed the porch and screened it in.   My brothers and I are in the picture with him.  Eventually, a regular peaked roof was also added to the cottage. 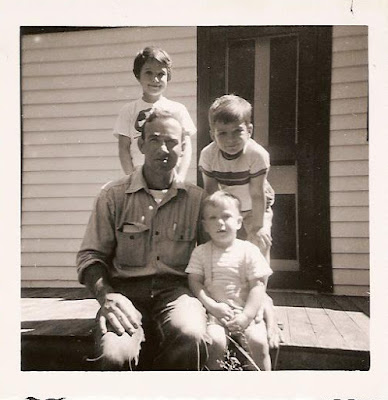 As a family, we often went over to the camp in summer, often for days at a time.  I guess, now that I think about it, there must have been times when we just went over to the camp for supper and the evening.  I know that we didn't always stay overnight, though we would often go there for a week at a time when my dad had some time off from work.
On the way to the camp, there was a wonderful farm stand where my parents would often stop to pick up some fresh produce.  And my mother would then cook much of what they bought.  Often there would be peas to shell, green beans to trim and cut,  or corn to husk.   Sliced tomatoes were a must.  I don't actually remember what was served for meat with these fresh meals; my guess is that we just made a meal of those good vegetables.  Salt and pepper, and some margarine for the corn,  would have been the only seasonings.

So I have some great memories of the camp, but it really wasn't my favorite place because I didn't like the outhouse and the lack of a tub or shower.  As children, my siblings and I loved roaming around outside.  The woodsy surroundings were quite different from the farm fields we were used to at home.  We would often discover tiny orange salamanders, wild raspberries, unusual wildflowers, and other finds.  A tiny fern-edged woodland pool replaced the brook we played in at home.

We were able to buy the property from the trust in 2019 and are fixing the cottage up as a little retreat and a place to spend time with grandkids.  An Incinolet toilet will be a must, along with a sleeping loft for the kids.  I've mentioned before how our daughter and son-in-law (who live next door, a five-minute trek along a woodsy path) did a great deal of painting of walls and cabinets and replacing of flooring as a lovely Father's Day surprise for my hubby.  Hopefully, I can put together an entire post about our renovations as time goes on.
One of my readers, Pamela, knowing that a place on the water has been a long-held dream of ours, had asked about a lake and no, sadly, it's not on a lake. 🌲🌲 There's a lake in the distance though, and it can be glimpsed in winter and spring. 😁  This spring photo from a few years ago shows the lake in the center of the picture, just to the right of the porch. 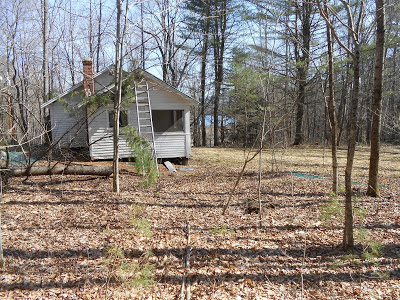 In fact, just the other day I noticed that, while sitting in a certain spot in the living room, the lake can be seen through the trees.  That is fun!  As I mentioned to Mr. T, this is the closest we're likely to get to waterfront property!
Posted by Mrs.T at 1:01 PM

Our trip to the Great North Woods. part 1

I can already see that I'm not going to fit all of our week-long getaway into one blog post.  It looks like maybe the first two days ... 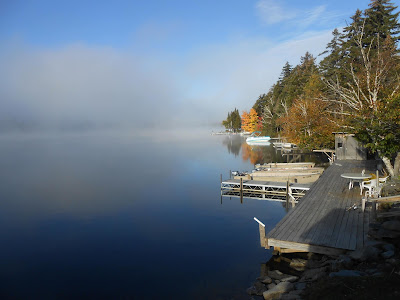