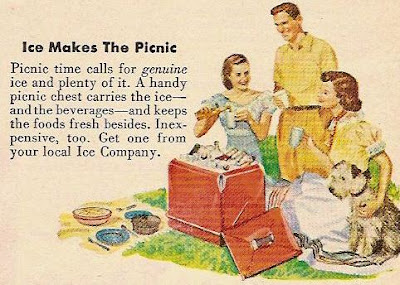 My mother would definitely not approve of the lazy way I make potato salad nowadays.  When I was growing up, potato salad was an all-day production.  You started in the morning or the night before if you wanted to have potato salad for supper.  There were no acceptable shortcuts in most cooks' books.  Certainly not in my mother's!  Although I must admit that both she and my grandmother made a great potato salad and they each had their tricks to make it easier and better.

Back then, making potato salad involved 2 steaming saucepans ... one for the hard-boiled eggs and one for the potatoes.  The potatoes had to be the long white or California white type -- the ones with the thin, yellowish-tan skin.  (We had never seen red potatoes!)  They were not to be peeled before cooking; no, just washed, quartered and then cooked.  When they were cooked and cool enough to handle, then came the next sticky step; removing the skins.  Then and only then were the potatoes cubed.  My mother’s secret trick was that she drizzled Italian dressing over the warm cubed potatoes and then put them in the fridge to marinate.

After the eggs cooled enough to handle, they were then peeled, put in a bowl and chopped with a metal chopper.  These were then added to the potatoes.  Now here is my grandmother’s secret trick: an egg slicer.  She put the peeled hard-boiled egg in the slicer and sliced it.  Then she carefully removed the egg (which holds together fine if you take care) and placed it in the slicer the opposite way, then sliced again, holding the slicer over the bowl of potatoes so the chopped eggs drop right in.  This effectively chops the egg just about right for potato salad.  I still do it this way!

Some people would also chop up onion, cucumber, or celery to add to potato salad.  I love the taste of raw onion in potato salad, but not the aftertaste, so I never use it.  My mother’s way was to shake in plenty of onion powder when seasoning.  She used Miracle Whip for dressing and my grandmother used mayonnaise.
So my easy way for potato salad involves washing and cubing the potatoes — as many as necessary for the group I’m feeding — then cooking them 20 minutes or so until tender.  If the potatoes in question are russets, I peel them; if they are white, yellow or red potatoes, I don’t peel them.  Then I usually cut up some chives (with scissors) and place them on top of the cooked, drained potato cubes.

I don’t always use eggs, but when I do, I use the quick, easy method of placing them in a small saucepan, covering with cold water and bringing to a full rolling boil.  Then turn the heat off, cover the saucepan and let stand 15 minutes.  Drain off the hot water and replace with cold water and a few ice cubes.  Place bowl in fridge until ready to use, then peel and chop the eggs and add to the potatoes.

For dressing, I use mayonnaise and usually some plain Greek yogurt.  I add dry mustard, salt and pepper and maybe some onion powder or seasoned salt.  Mix the dressing into the potatoes until the salad is the consistency you like.  (Add more mayo or yogurt if needed.)  Taste, then adjust seasoning as you like. Bacon bits, if you like them, are also a nice addition.  Sprinkle the finished salad with paprika if you like.

This can even be served warm if you don’t have time to chill it.  Or, if you have a few minutes, remember this rule of thumb: 15 minutes in the freezer equals an hour in the fridge.  (Just don’t forget and leave the salad in the freezer.  Frozen potato salad just wouldn’t be the same!)

I’m pretty sure my mother wouldn’t approve of my shortcut, haphazard way of making potato salad.  But I’m also pretty sure she would like the way it tastes!  We certainly do!

(Both images on this post are from my collection of vintage magazine advertisements.)
Posted by Mrs.T at 3:36 PM