How can this be?  It's Wednesday, May 27 -- the very last Wednesday in May --  and time again for the Wednesday Hodgepodge.  To join in, head over to From This Side of the Pond and get the questions from Joyce, then answer them on your own blog.  Here are the questions for this week, which thankfully took a lot less thought than last week:

1. The US of A celebrated Memorial Day this past Monday. Does your family have any military ties? If so, tell us about them.

My dad served in the Navy during World War ll, and two of my uncles served in the Army during the same time period.  Other extended family members did, as well.  I recently came upon some real treasures -- letters my dad had written to his mother while serving aboard ship.  On one of them, I was astounded to find that the censor -- my dad's boat officer -- had taken the liberty of adding a p.s. -- a note to tell this dear lady what a fine son she had!  Censors were not supposed to add to letters, but this one did and I'm glad.  What a treasure for posterity! 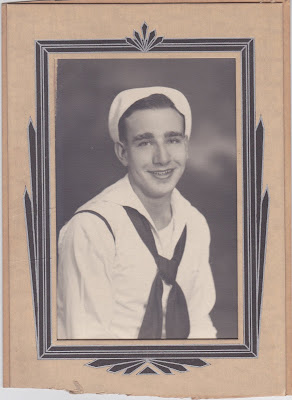 2. Cole slaw, potato salad, baked beans, potato chips, mac and cheese, macaroni salad...your favorite BBQ side? How many of these do you make from scratch vs. buying from the deli?

That's a difficult choice as far as which is my favorite BBQ side.  I think if I had to pick just one of these it would be potato salad.  Here is my favorite recipe: Bacon Chive Potato Salad.  I usually peel and cube the potatoes before cooking, if I am using regular white or russet potatoes as I often do.  With red or yellow potatoes, I am more apt not to peel them, but I do cube them rather than cutting into wedges as the picture shows. 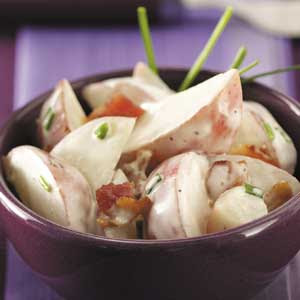 As far as how many of these sides I make from scratch: all of them except for potato chips.

3.  I enjoyed asking this question back when the Hodgepodge was a regular thing...Lake Superior State University posts a list each year of words they think should be banished from the Queen's English for misuse, overuse, and/or general uselessness. The 2020 list includes-quid pro quo, artisanal, curated, influencer, literally, I mean, living my best life, mouthfeel (word used by foodies to describe texture of food in their mouth), chirp (basically an insult, you can read more on the website), jelly (short for jealous), totes (short for totally), vibe, and OK Boomer (internet response from millennial to older generation).

Of the words/phrases listed which would you most like to see 'banned'?

I don't know.  Never heard "totes" or "jelly" in these contexts before.   I've never really liked the word "mouthfeel" and -- although I think "literally" is a fine word -- these days it often gets used incorrectly, as mentioned on the LSSU site.
4. I'm sure next year's list will be filled with words springing out of this weird season we're all in currently. What word or phrase associated with the Corona would you be happy to hear less often?

All of them!  I find "virus shedding" to be particularly disgusting, but I detest "social distancing", "masking up", and all the rest of them.

I also object to the use of the word below as a noun.  Quarantine is for sick people.  Not to mention this has been going on a lot longer than 40 days.  However, to be fair, I guess the verb form definition below could work in this context.  Isolation has definitely been imposed on us.  Thankful things are beginning to open up here.

5.  The month of May wraps up in just a few days. Bid her adieu in ten words or less.

May you leave quietly and take the virus with you.
6. Insert your own random thought here.

I do think my hubby may be addicted to ice cream.  We've only been 5 times since the ice cream places began to open ...

Me?  I'm just along for the ride.  I can take or leave ice cream at home, but if he's buying, I'll eat a small serving.

Happy Wednesday, everyone!
Posted by Mrs.T at 12:05 PM