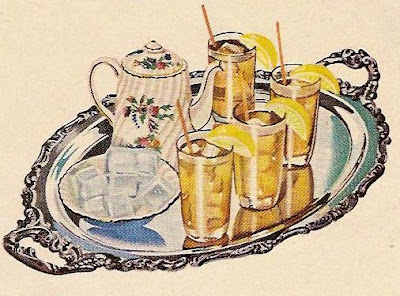 And the times lately have certainly been desperate as far as heat and humidity are concerned, not to mention the ever-present stress and strain from our current world situation.  So I'm updating and adding to this post from two years ago, in hopes that others may find it useful.

However.  There are times when a lightly sweetened iced tea is just the ticket.  We've had an unusually long spell of heat and humidity and I have found myself making a jug of iced tea nearly every day during it.

I think maybe it all harks back to when my mother and grandmother made iced tea every summer, and it also brings back memories of my first job, washing dishes in a very busy local restaurant.  No AC in the kitchen, of course -- not sure window air conditioners were even a thing in the mid=1960s.  I think there were a few strategically placed fans.  The dishwasher ran on propane, so there was a pilot light and it got very, very hot in that kitchen!  When the bus people brought in their overflowing bins of dishes, there would almost always be partially finished glasses of iced tea, complete with ice and lemon.  Oh, the clinking sounds of the ice and the zesty lemon scent tempted me!   But don't worry -- I never succumbed to drinking from a stranger's discarded glass.

I did, however, drink my share of iced tea at home and I still find it one of the most refreshing beverages I can think of.

I have often used my daughter's recipe,  which is a good bit healthier than my mother usually made iced tea.  (She used a can of lemonade concentrate, replete with high fructose corn syrup I am sure.  Though, in her defense, I do remember many, many years ago when she used lemons and sugar instead.)

I have copied and pasted Carrie's recipe just as I wrote it in a 2007 blog post.  When I've made this during those desperate times in past summers, I've  usually made half a batch.  And I've used brown sugar, which feels just a tiny bit healthier and adds a bit more depth to the flavor. 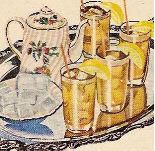 Since our 40-day sugar fast this spring, however,  I decided to try and make a healthier iced tea that didn't use sugar.  So this is what I am doing, just about every day:

8 cups boiling water
7 black tea bags
1/3 cup agave nectar
1/4 cup lemon juice
Pour the boiling water over the tea bags in a large bowl. Let steep at least 15 minutes or according to your taste.  I often let it steep for an hour or more. Stir in agave nectar and lemon juice. Stir well; let cool. Transfer to a pitcher or jug and let chill in refrigerator.  Serve over ice.  Makes about a half gallon.

If heat and humidity (not to mention hype and hysteria) have you desperate, too,  you might like to give one of these recipes a try.
Posted by Mrs.T at 12:15 PM