Looks like a random post today for sure!  It's been a different (and good) but very busy week.  Thankfully I scheduled my Hodgepodge post on Tuesday afternoon to publish on Wednesday, otherwise that might not have gotten done.  The remainder of our week may look boring to some, but it was so nice to just have some time to get caught up on things together, and catch up with one another in the process.

As many of you know, Mr. T works in the forest industry.  In the spring it is always subject to change how much he will work, because of mud in the woods.  Of course, it is not yet spring here in New Hampshire.   But unusually warm temps have led to a premature snow melt ... and we had a LOT of snow.  So things are getting muddy already, though we hope they will stiffen up again soon if we get some cold weather.

This week he came home on Tuesday night and knew he would not be working the next day.  He announced we would be going out for breakfast on Wednesday.  I was on the phone with my daughter at the time for our weekly chat -- and let out a whoop that was heard all the way across country in Nevada.

After sleeping in until after six (something that has not happened in months!), we both enjoyed a good quiet time in the Bible and prayer.  Then we headed down the highway toward a favorite diner with light hearts.  It felt just so good to have a day off.  We both agreed that winter logging is not for sissies -- and this applies to both the loggers and their spouses.  Long hours, Saturday work ... it's a blessing in some ways but very challenging in others.  I don't mind alone time at all; in fact, I seem to require it to be at my most productive.  And I never run out of things to do.  But having him gone so much of the time does get wearing after awhile, on both of us.  So a free day stretching before us was such a great feeling.

We both enjoyed meat loaf omelets with home fries.  He had a grilled English muffin and I had raisin toast.  And lots of coffee, of course.  It was a wonderful breakfast!

Some time ago I posted a picture of the windows at the welcome centers in our state -- they were painted for fall.  I promised at the time that if I happened to see windows painted for winter at one of the diners, I would share pics of those.  Well, the diner we ate breakfast at had its windows painted, so here you go. 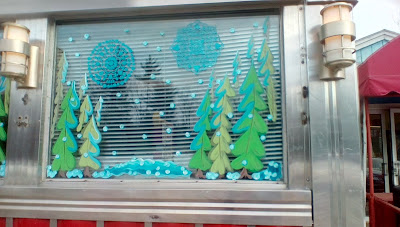 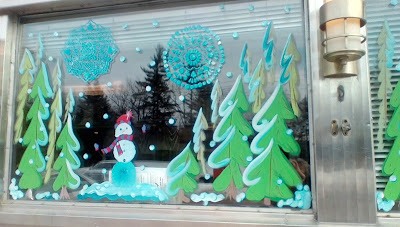 So the rest of Wednesday was filled with errands for Mr. T and housework for me.  Then church in the evening for our Bible study/prayer meeting.

He ended up with Thursday off, too.  So Thursday morning after our quiet times, we went and did our grocery shopping for the week.  Then we made a stop at Dunkin' Donuts for coffee and a muffin.  The windows at Dunkin' Donuts have been painted as below since before Christmas -- but it is still winter (by the calendar if not the temps) so they still look very nice. 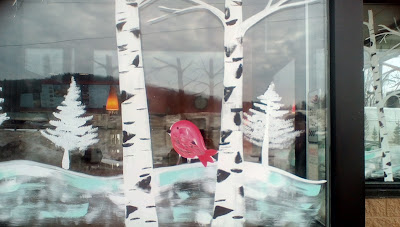 After our coffee break, we headed for Walmart to finish up our grocery shopping.  The rest of the day was spent in housework, bill paying and tax form preparation on my part and some housework on Mr. T's part as well -- turning the mattress, vacuuming under the bed and so on.  I made a skillet lasagna for supper and we enjoyed it with a salad.  After supper we watched an episode of The Andy Griffith Show.  Talk about relaxing!  (Except that the episode was "Mr. McBeevee", which I admire for its artistry but I just find it such a tear-jerker.  However, I managed to hold the tears at bay this time.)

Friday morning he learned he would also have Friday and Saturday off.  Here is where we had to make a decision, as we'd been considering an overnight getaway.  We decided to stay home and accomplish some things and plan the getaway for another time -- a decision that proved sound when it started to rain later on.  His morning was again filled with errands and I did some more housework.  Then we went out to lunch at our favorite local seafood place.  Friends had given us a gift certificate, so we gladly used it.  We spent the afternoon doing some work at my dad's home.  We had an easy supper of chicken from the slow cooker, instant mashed potatoes, and stir-fry vegetables.  After supper, what else but more Andy Griffith?

Chicken was on sale for 1.69 a pound this week, so I cooked a lot of it in the slow cooker to cut up and freeze as simply seasoned cooked chicken as I described in this post: A Fowl Tip.  That was how I happened to have chicken all cooked and ready for supper.

I warned you this post would be random and somewhat dull.  The other project I did this week (before Mr. T was off) was making some envelope-style pillow covers for our kitchen rocker.

Last February, I had made some pillows for this rocker using green microfiber "bar mop" towels from Walmart. 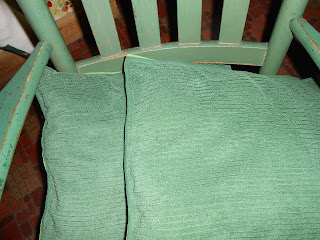 You can read about that project here: Trivial Pursuits.  The pillows have worked out great and I still love the color, but I have been less than pleased with the microfiber aspect.  The pillows pick up lint very easily.  I decided to cover them, but wanted covers that could easily be removed.  I did a search and found this tutorial: Ten-Minute Pillow Covers, which was exactly what I wanted.

I wanted to use fabric that I already had, but had recently sorted through a large tote of fabric and knew there was nothing just right.  I decided to check my tote of Christmas fabric, since our kitchen has lots of red and green -- and, lo and behold, there was a red with polka dots I thought would be perfect. 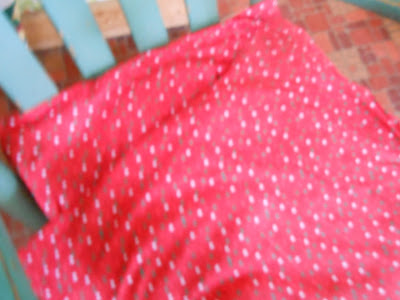 You can't really tell -- the color isn't that great in the photo, but it goes well in the kitchen.  The dots are green, dark red, and white.  There was exactly the right amount for the two pillow covers, also!

If you have a need to make covers for any pillows in your house, or if you just want to change the look of your pillows, I highly recommend this tutorial.  It is SO simple and there is very little sewing.  Each cover is made from one piece of cloth.  In fact, if you have a child who is learning to sew, this would be the perfect project for them.

Time to end this random post ... we are invited to have supper at the home of friends tonight.  I did lots of baking today, so I will hopefully share a post about that next week.  Hope you are all enjoying your respective weekends!