This leg of our trip took us from Albany, NY to Chicago, IL. This Lake Shore Limited was train 49, and it was also “Late-for-Sure” -- about 40 minutes late. But, as we were to learn, 25 minutes and 40 minutes were not long delays at all. Trains can (and often do) run several hours late.

We enjoyed seeing the train station at Albany during our layover there. It is new and absolutely beautiful. It has a food court and even its own branch post office. 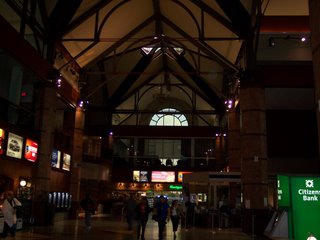 And it’s good we got to see it on the way out, because we didn’t see it on the return trip -- just stepped from one train to the next outside. During our wait we snacked on granola bars and speculated as to whether we would be too late to get supper on the train. (We weren’t.)

Even roomettes -- the cheapest, smallest rooms in sleeping cars -- are considered First Class on Amtrak, so meals are complimentary, along with other treats like in-room morning newspapers, coffee, juice, and bottled water. We had heard good things about the food in the dining car, and we weren’t disappointed. I wrote in my journal:

“Supper was good, although we were eating very late. Mr. T had Beef Ragout, and I had the roast chicken. We even had dessert -- he had cheesecake, and I had Mississippi Mud Cake. Very good!”

Here’s another excerpt from my journal: “10:15 p.m. -- We’re cozily ensconced in our little roomette. It IS small, but very comfy indeed. We think we’ll sleep very well. They fit an amazing amount in such a small space. There’s a toilet in here, two bunks, a fold-down sink, a fold-down table, quite a bit of storage space -- it’s great!”

Here's a photo which shows part of our roomette. 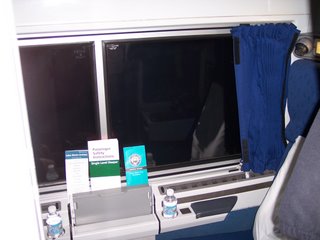 You can see the window, the fold-down table (in the closed position), a corner of one seat, and our water bottles.

I should add that the Lake Shore Limited sleeper cars are what’s called a Viewliner. When the upper bunk is brought down into position, the person who has that space gets his very own picture window. The roomettes on the Viewliners do seem much more spacious. The Superliners (which we’ll get to later) have an upper level, with bedrooms on both levels, so understandably the rooms need to be smaller.

We didn’t sleep as well as we’d hoped, but I think that’s understandable -- getting used to the motion of the train, hearing the track sounds and the whistle (which blows almost constantly at times) and -- something we hadn’t anticipated -- the roar of passing freight trains.

There was a shower just down the hall -- rather cramped quarters, but not bad. The hardest thing to deal with was getting bounced around as the train sped along the tracks. On this train, I had a rather scary experience -- after showering and dressing, I found that I couldn’t open the door into the hallway! Somehow, probably from all the movement of the train, it had gotten stuck in the locked position! I had visions of myself having to ring for the car attendant to let me out. Fortunately, I was able to use a comb to push up on the bolt and open the door.

Breakfast was wonderful. Mr. T chose the Bob Evans Scramble, a mixture of eggs, sausage and cheese, which comes with hash browns and a bowl of fruit on the side. I ordered the three-cheese quiche, which was excellent, with sausage patties on the side. Juice and coffee were also included for both of us. We had already found, by this point, that one of the highlights of this trip was going to be sitting with all sorts of different people at meals and getting to know them just a bit. I imagine some people hate this part, but we really enjoyed all of the different folks we were able to meet and chat with.

The Lake Shore Limited pulled into Union Station in Chicago about an hour and 10 minutes behind schedule. Late-for-Sure again!

Next Installment: Union Station
Posted by Mrs.T at 1:45 PM