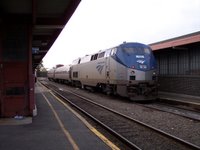 We began our journey traveling in coach class on the Lake Shore Limited from Massachusetts to Albany, New York, and ended it by traveling, again in coach, from Albany to Massachusetts. This leg of our trip was only 3 or 4 hours long, so that is why we traveled in coach. We were on train 449 -- due to arrive at 2:20 that first day, but which actually arrived closer to 2:45.

I had done a lot of research into Amtrak travel, and was expecting a lot of friendliness from the Amtrak folks. We didn’t see that in Massachusetts, either coming or going. That could well be just Massachusetts itself! In other places, we found the Amtrak folks in the stations, and especially on the trains, to be very friendly and helpful.

We were pleasantly surprised by the comfort of the seating in the coach cars. The seats are roomy, comfortable and will recline. There are foot rests and pull-down tables in front of you, and much more legroom than in airplane seats. Each coach car has two restrooms, and there is a cafe´car where one can purchase snacks, sandwiches, etc. We had eaten lunch before we got on the train, so were not hungry. Toward the end of the trip, we snacked on some grapes we’d brought along.

The views of the fall foliage from our windows were very nice -- unfortunately, many of the photos we took also feature the knees of the young men in the seats across from us. This part of the trip was just a bit nerve-racking because we were seated in the midst of a group of foreign-exchange students -- high-school age, I would say -- who spent most of the trip roaming the aisles and chatting with one another in German (or a similar language) quite loudly. At first it didn’t bother us, but I had quite a headache by the time we got to Albany.

Here’s an excerpt from my journal concerning Part 1 of the trip:

“2:55 p.m. -- “Well. we are aboard the Lake Shore Limited and moving toward Albany. The conductor has just come through and punched our tickets. The train was a good 25 minutes late. I read on the Internet that this train is nicknamed the “Late-for-Sure Limited”, and so far it is proving true!“

On this leg of the journey on our return trip, we saw some lovely views from the windows, but we reclined our seats and slept most of the way.
All in all, our experience in coach class was a good one, and we decided we could do an entire short trip in coach easily -- as long as it didn’t involve more than one overnight.

Next installment -- First Class on the LAKE SHORE LIMITED.
Posted by Mrs.T at 1:01 PM