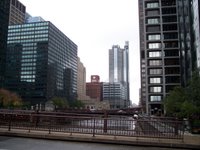 Chicago, not far from Union Station

We were scheduled for a four-hour layover in Chicago, and looked forward to exploring the station and maybe going up the Sears Tower. (I will admit that my husband was much more gung-ho about this possible adventure than I was.) The weather was ruling out the Sears Tower as we approached Chicago, being gray and drizzly. Time was also ruling it out... as mentioned, our train was over an hour late at this point. Time became even more of an issue at the baggage claim.

Since the station we would be getting off at in Nevada was an unmanned one, we had to claim our baggage at Chicago and bring it to the next train with us. It would ride on the sleeping car with us from here on out. We had only checked 3 bags, and 2 of them came through quickly. We had quite a wait for the third bag, however, and time was rapidly ticking by. But once we had all our bags, help was in sight!

One of the wonderful perks of riding first class is access to Amtrak's Metropolitan Lounge in Chicago. (I believe the stations in Boston and New York also have them, and maybe other stations as well.) We were so thankful we had this nice place to wait, and a place within the lounge to store our bags. You check in when you first arrive, and the nice people at the desk write you up a pass which you will use to get in and out of the lounge. They also write on this pass what time your train will be boarding, and it serves as your boarding pass as well.

The Metropolitan Lounge is a very large waiting area just filled with comfortable couches, chairs, loveseats, and coffee tables, end tables, even tables with chairs to work or eat at. There's even a fireplace. There's a large TV screen and also monitors to check arrivals and departures of trains. There's plenty of free soft drinks, coffee, tea, water, and snacks. We quickly found a nice loveseat with its own coffee table and settled in. Then, since we knew we wouldn't be getting lunch on the California Zephyr, Mr.T went out of the station to Potbelly, a sub shop previously recommended by a friend. He brought back some yummy subs and we enjoyed them with the complimentary Pepsi provided there in the lounge. While he was gone, I people-watched and got lots of cross-stitch done. The lounge really filled up during the time we were there. It was encouraging to see men giving up their seats for ladies and younger people offering their seats to older folks.

Another really neat thing about being in the Metropolitan Lounge is that when your train is ready to board, you can get redcap service right there from the lounge. So when the California Zephyr was ready to board, we found a redcap right at the door of the lounge waiting for us. A speedy little baggage vehicle whisked us right to the train!

Next installment: First Class on the California Zephyr
Posted by Mrs.T at 3:44 PM