November brings thoughts of Thanksgiving Day, and I have many memories I'd love to share across the kitchen table. If possible, I should do this before my table becomes laden with food for that special day. I'd like to begin by sharing this reminiscence of my childhood Thanksgivings at my grandmother's New England farmhouse.

On Thanksgiving Day, the dining room assumed an even greater splendor. The table was extended to its full length and spread with a snowy linen cloth. It was set with Gram’s best dishes -- white with a graceful design of trailing green ivy. The serving dishes were of the same pattern. At each end of the table stood a butter dish and salt and pepper shakers, all of clear glass in a bumpy hobnail design.

Even with all the snacking, everyone managed to do the Thanksgiving dinner full justice. In fact, the only sounds during the meal were the clink of forks against china, and the occasional murmur of conversation. Gram prepared and served all the food herself, and never sat down until everything was on the table. There was turkey, of course, with mounds of moist bread stuffing, redolent of Bell’s Seasoning, and Gram’s incomparable dark brown gravy. There were vegetables -- white, fluffy mashed potatoes, well-peppered golden winter squash, boiled onions, and tender green peas. There was cranberry sauce, both the jellied and the whole-berry types, both referred to by Gram as “cranberry jelly”, and often there was cranberry-orange relish as well. Always, there was a huge tossed salad with Gram’s favorite, Wish-Bone Italian dressing. There were home-baked rolls that exuded a marvelous, yeasty aroma. And sometimes, in keeping with Gram’s love affair with convenience foods (understand this was a lady who once cooked in lumber camps, and you’ll know why) there were Pillsbury butterflake rolls! What fun it was to pull them apart and eat them layer by layer -- at least, it was fun unless my dad happened to notice, at which time I would be scolded for playing with my food. (There were some benefits to being relegated to the little kids’ table in the kitchen!)

Even after consuming all that food, most of us were not uncomfortably full. (My cousin Kevin was the exception. He invariably ended up on the living room couch clutching his stomach.) And, as everyone rallied around to clear the table and help with the dishes, there seemed to be a spirit of family closeness and good will that was rarely felt at any other time. Maybe -- just maybe -- the magic of Thanksgiving at Gram’s worked on grownups just as well as it did on children!
Posted by Mrs.T at 2:26 PM No comments: 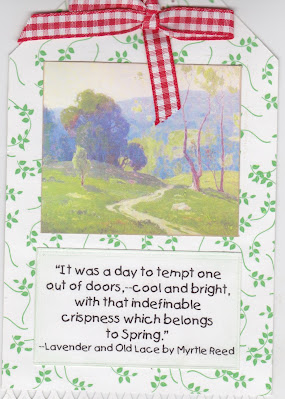