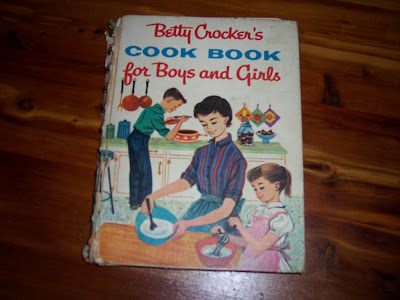 Recently I was challenged, by a Bible study book I was using, to think back to my childhood and memories of my mother as a homemaker -- to reflect on things she may have taught me.

But oh, the kitchen memories! Now THOSE are worth their weight in gold!

There were always wonderful things to eat coming out of Mom’s kitchen. There was always something homemade to snack on after school, and supper was always a good, nourishing meal. Only occasionally was something served that I truly disliked, such as liver. I also remember not liking runny eggs for breakfast, and I didn’t really care for pot roast as a child because we always had farm-raised beef that was not cut particularly well, and there were all these tendons and other things showing up in the meat that just made me gag. Other than those few exceptions, I loved the food that Mom prepared.

It’s funny how some of my sharpest memories are of little things -- like how she always set my dad’s place at the table with a separate little sauce dish for any vegetable (for example, summer squash, or peas) that might be too liquid on the plate. She didn’t do this for the rest of us as I recall, just for Dad. That was the way he liked such things to be served. Another little thing was how she always made her own salad dressing fresh for each salad we ate. As far as I remember, there was no making up a whole jar of dressing and storing it in the fridge. She never measured, just shook up oil, vinegar, and seasonings. I was probably ten or even older before I tasted -- and instantly fell in love with -- bottled Wish-Bone Italian dressing, at my grandmother’s house.

My mom was always exchanging good recipes with friends and family too. She had a recipe box full of them, scribbled on bits and pieces of paper and envelopes as well as on 3x5” cards. Most of her scribbled-down recipes (probably relayed to her across the kitchen table or over the phone) have rather sketchy directions and amounts, but they’re fun to look back at and try to translate.

Holidays were special times at home -- especially Christmas. I’ve written an entire book of my Christmas memories, and am sure I barely scratched the surface of them. Thanksgiving was also special. Often we went to my grandmother’s, but other times we ate at home, and Mom went to a lot of work to make things festive and to involve us kids in the preparations. I remember grinding cranberries and oranges for cranberry relish, washing seedy red grapes, cracking nuts, etc. Mom loved to have fancy dishes of grapes, nuts, and candy around for people to enjoy on Thanksgiving Day. I believe this is something that her family had often done, at least in later years when they could afford such things.

Another kitchen memory is how warm and cozy it always seemed when we came in from playing outdoors in the winter. We would be greeted with mugs of hot cocoa with blobs of marshmallow fluff melting on top. I never thought much about it at the time, but several older children from a neighbor family often went sliding with us, and they were always welcomed in Mom’s kitchen too. These children were from a very poor family; I can’t imagine that they ever were greeted with mugs of hot cocoa at home. A smack upside the head was probably more like it, unfortunately. I was too young to realize that, and also too young to realize what a wonderful opportunity my mom was giving them to spend some time with a real family around a welcoming kitchen table.

As I’ve thought about this topic ever so briefly, I realize there are many more kitchen memories yet to surface. I’ll be sharing more of them across my kitchen table in the weeks and months to come...
Posted by Mrs.T at 2:33 PM 2 comments: 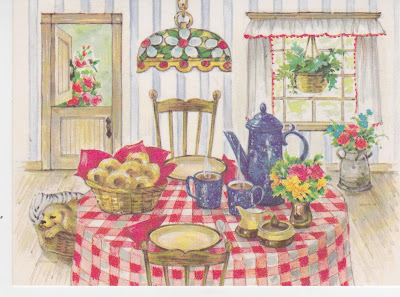 What an unusual mess my kitchen table was last night! A friend has a ministry with a dozen young girls ages 10 to 15. I had told her some weeks ago that if she ever wished to use my kitchen for a cooking or crafting venture with the girls, she would be welcome to. (The home where they usually meet is small, and kitchen space a bit cramped for so large a group. My kitchen, by contrast, is large and rambling.) She had the wonderful idea that for their October meeting, she would like to use my kitchen and have me teach the girls to fry doughnuts. We would have hot cider to go along with the finished product. It sounded so simple!

Let me hasten to add that, although I learned to fry doughnuts at my grandmother’s elbow, I have not made doughnuts for years. One of my daughters made them several times during her high school and college years, but at those times I only supervised. So my skills were rusty and my aversion to deep-frying deep-rooted, but I was game for the challenge. I was quite certain the finished product would not likely resemble my grandmother's doughnuts in any way, though I intended to use her recipe.

As time went on in my planning for this event, I decided just to make one batch of my grandmother’s recipe -- which produces 3 1/2 dozen doughnuts -- for the girls to fry. In addition, I would make a double batch of a no-fry, baked doughnut of the raised variety -- much healthier than frying. These would be all baked when the girls arrived, allowing them to spend all their time in the production of the fried cake doughnuts. Their leader had told me she hoped to have each girl be able to take part in the frying process, and hopefully in the rolling and cutting too. In addition, we decided to provide frosting for the baked doughnuts and to ask the girls to bring sprinkles, coconut, nuts, or other toppings. This sounded wonderfully easy when we were planning it.

However, when I sat down yesterday morning to try and plan how it would all work, I found I had a challenge on my hands. I made four charts before I found one that worked. We would have 12 girls and wanted each to be able to roll, cut, and fry some doughnuts, as well as take a turn removing them from the fat and later frosting some doughnuts. In addition, I thought up a couple more jobs to streamline things and keep everyone busy -- 1) Transferring the cut doughnuts to waxed paper-lined trays; 2) Carrying said trays to the girls who would be frying doughnuts in 2 electric skillets (stationed at opposite ends of the kitchen to avoid tripping a circuit breaker) and 3) Finishing, which included arranging finished doughnuts on doily-lined plates for each girl to take home; cleaning up, and doing dishes. We would have 1 hour of their 2-hour meeting time to accomplish all this.

Making up a schedule that worked was like doing one of those logic puzzles: If Jane’s favorite subject is math, and Sue takes peanut butter sandwiches in her lunch. what position does Linda play on the basketball team? (Fortunately, I have always enjoyed such puzzles.) I assigned each girl a letter of the alphabet and made up a printed schedule for each girl detailing what she would be doing first, second, etc. My thought was that every 10 minutes we would rotate jobs. Even when the first part of the meeting went a bit overtime, I still thought it would work -- we would just rotate jobs every 5 minutes instead.

My plan did work well, but not as well as I had hoped. To begin with, I should have had a few doughnuts -- maybe 3 for each fryer -- all cut out and ready so that the girls frying could begin their task at once and not have to wait for those rolling and cutting. Other than that, things went quite smoothly, and most of the girls followed their schedules quite well, seeming to enjoy every part of the process. Flour, dough scraps, frosting and sprinkles were everywhere! But most of the girls and a few moms pitched in to clean up the kitchen, and it was soon restored to order. All the girls (I hope!) got to try their hand at the deep-frying technique, and the frosted doughnuts were works of art! The plates of doughnuts they took home looked wonderful, and if a few of them turned out raw in the middle, some family member probably ate them anyway.

All in all, it worked well, and the girls seemed to have a marvelous time. An "all-round" good evening! 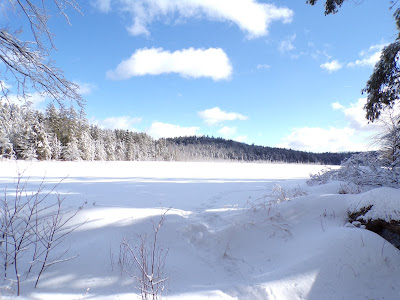