Another superhero in the family 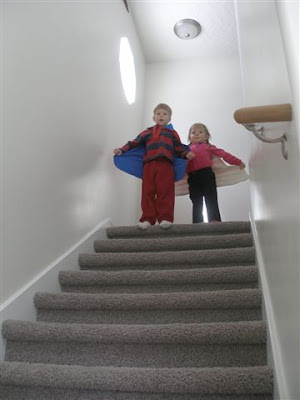 Back last spring, I showed photos of superhero capes I had made for Darrin and Emily.  While we were in Nevada, their younger brother Elliott celebrated his 2nd birthday.  Darrin thought that a fine gift for Elliott would be his very own superhero cape, as he and Emily call their little brother Super Elliott-Mouse.

I got busy before we left and made a cape.  This pattern -- Clever Little Cape
-- is the best.  So easy and comes out so cute.  I used vintage fabric from my mother's stash for this one.  Here's the cape: 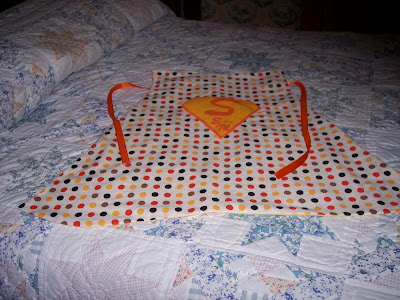 With a mouse embroidered on the inside: 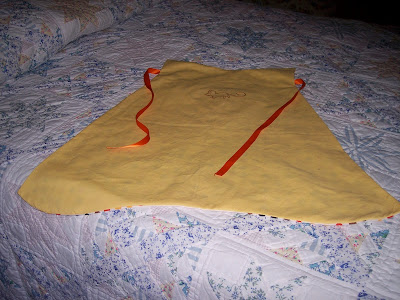 A closer (if blurry) look at the mouse: 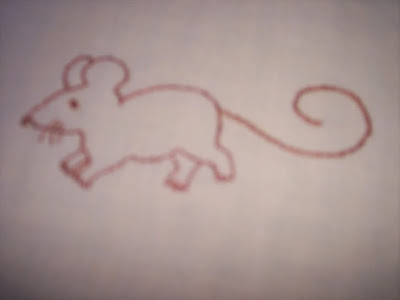 A closer look at the emblem on the back. 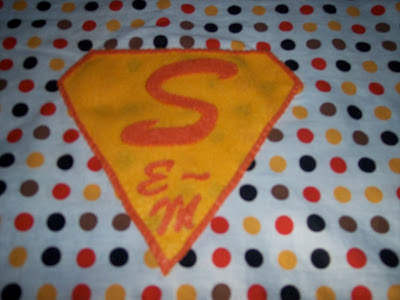 Interestingly, Elliott's birthday cake, made by his mom, ended up matching the cape!  She just used up icing colors she had on hand, but isn't it neat how the colors are the same as the cape? 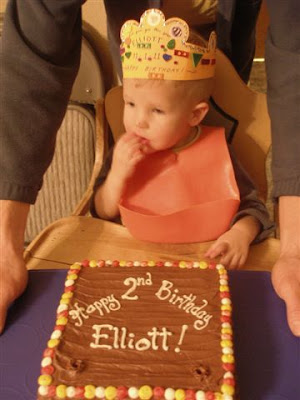 Unfortunately, I didn't get a picture of Elliott wearing the cape, but here he is piloting a boat at the playground: 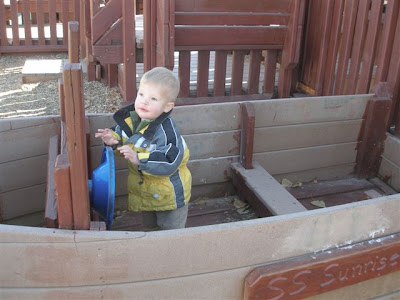 
I received a free advance copy of the December/January Country Woman magazine because they published my recipe for hot chocolate mix.  I took the issue along on our trip as a special treat to read on the plane.  A recipe that caught my eye was for Fiesta Sweet Potato Soup.

I tried the recipe earlier this week and it is very delicious indeed.  I could only find 12-ounce packages of the chicken sausage (I used the garlic herb flavor of the Al Fresco brand) so I used only 3 of the sausages, reasoning that this would be the 9 ounces called for in the recipe.  This soup is a little bit spicy, but I have a cold right now and so that appeals to me.  I would definitely make this soup again.  Hope your family enjoys the recipe if you try it!
Posted by Mrs.T at 10:37 AM 2 comments:

A blessed Thanksgiving to all! 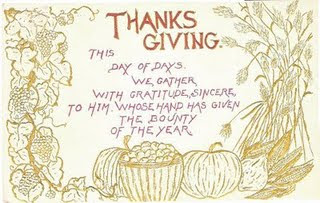 I would like to take a moment to wish all of my readers a very blessed Thanksgiving Day!  I hope that you will have a wonderful day with family, friends, or just by yourselves.  An encouraging thing to do for your devotions sometime this weekend would be to get a concordance and look up the  references to the word "thanksgiving" in the Bible.  The following is not one of them, but is one of my favorite Bible verses:


"By Him therefore let us offer the sacrifice of praise to God continually, that is, the fruit of our lips giving thanks to His name."  (Hebrews 13:15)

Thanksgiving should be a part of our every day!

While out in Nevada, I helped my daughter a lot in the kitchen.  We tried this recipe Sunday Chicken Supper, from one of her Quick Cooking cookbooks, when we were getting together with another family.  We actually borrowed a second slow cooker so we could make a double recipe.

It was absolutely delicious.  We used white sweet potatoes (which I had never heard of or tried before)  rather than regular potatoes, and we used some boneless chicken breasts and thighs rather than the cut-up fryer.  Both families really enjoyed this flavorful but simple dish and it was wonderful to come in from our afternoon activities to a supper that was all ready and waiting for us.

I made this recipe again at home this past Sunday,  and Mr. T and I enjoyed it just as much here as we did in Nevada.  I used russet potatoes this time,  and used some bone-in chicken thighs and some chicken tenders.  I also used frozen pearl onions rather than the chopped onion, and frozen green beans rather than the fresh ones.  It seems to be a very adaptable recipe, which I really appreciate.  I think it would also be good with chunks of winter squash instead of carrots.

I thought I would share so others can try this yummy recipe!
Posted by Mrs.T at 9:06 AM 2 comments:

Sunset from the plane

On our way out to Nevada, we were blessed to see a beautiful sunset as our flight approached Salt Lake City.  My hubby snapped many pictures of it, but these are probably the best.

We saw a nice sunset on the way back as well, but decided we already had enough sunset pictures.  I thought you would enjoy seeing these.
Posted by Mrs.T at 12:15 PM 7 comments:

On our recent trip out West, my daughter and I visited one of our favorite shops, The Two Olde Crows.

During the time Mr. T and I were in Elko, this shop was holding its annual Christmas Gathering.  Joanna and I made time to go visit, sip hot cider, sample Christmas goodies, and do a bit of shopping.  I wish I had brought along my camera so I could get a photo of the way the front of the shop was decorated for Christmas, with white lights, berry garlands, and so on.  But I forgot to bring my camera to the shop!  So this photo of Christmas items, from their website, will have to do.

Before leaving for our visit to Nevada, I had crafted an item as a favor for a friend.  She had insisted upon giving me a monetary gift, so I brought it along for shopping on our trip.  Here's what I bought: 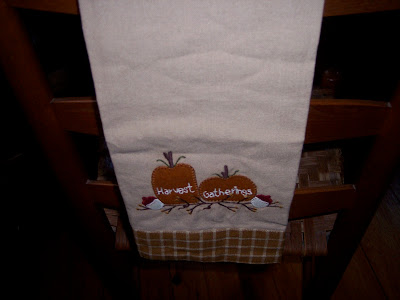 A closer look at the design: 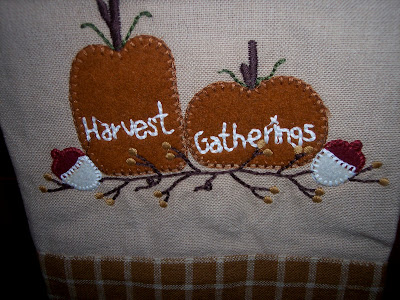 And a second dishtowel with a Christmas theme. 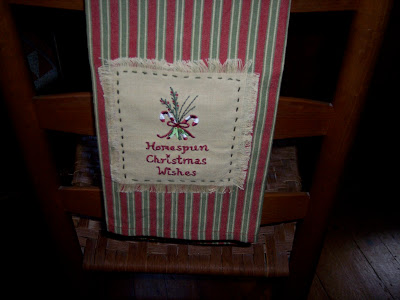 Just wanted to check in with a quick hello.  We are back from our travels to Nevada and back!  We are thankful for safety in traveling thousands of miles by air.  We had a wonderful time, but it's good to be home.  Now to adjust back to our regular routine, schedules and time zone!
Posted by Mrs.T at 12:14 PM 6 comments:


On Sunday, I needed to take some goodies to church for a fellowship time honoring friends who are leaving for their annual mission trip to South Africa.  (I have been in a pumpkin mood lately, as anyone who may have seen my Recipes to Try board on Pinterest will have noticed.  I think I even pinned some pumpkin recipes to my I Love Fall board as well.)  Anyway, all that to say that with the opportunity to bake, it shouldn't be surprising that I chose a pumpkin recipe.

I had seen this recipe for Pumpkin Snickerdoodles and was eager to try it.  Yes, the recipe actually contains pumpkin -- 3/4 cup of it.  I had previously seen a recipe where the cookie part was a traditional snickerdoodle, but the topping was sugar mixed with pumpkin pie spice.  I was more interested in this one because there was actually pumpkin in the recipe.

This recipe isn't exactly like a traditional snickerdoodle in texture.  I think the recipe would need to include cream of tartar for that to happen.  I was tempted to add some, but didn't know how it would interact with the pumpkin.  But the cookies are not soft ones, either.  Sort of crisp on the outside and maybe sort of cakelike within.  They do have a great flavor and are a pretty light orange color on the inside.

I did find that it's important (to make the outside crunchy) to actually roll the dough in the sugar-spice topping.  My usual way with such recipes is just to dip the tops of the cookies rather than rolling them, but it definitely is better to roll the cookies in the sugar mixture in this case.  And about that topping -- I was out of cinnamon, so I substituted pumpkin pie spice for the total amount of spice in both cookie dough and topping.

We thought these cookies were very good.  Hope your family enjoys them if you try the recipe!
Posted by Mrs.T at 10:45 AM 10 comments: