I grew up with maple sugaring -- and hope to write a post one day about that sweet experience -- and over the past few years I have enjoyed adding a touch of maple to my early spring decorating.  Today I will show just a few pictures of my maple decor.  Most of these photos were taken with the Kindle so they aren't the best, and the light was a little funny but I sort of like the way it looks.
Hope you've enjoyed this taste of my maple decorating!  Sharing today with Sandi's No Place Like Home and Bernideen’s Tea Time, Cottage and Garden Blog Party.  Also sharing with Vintage Charm and Share Your Cup Thursday.  Visit these wonderful link parties and be inspired!
Posted by Mrs.T at 7:54 AM 18 comments:

A blessed Easter to you!


Yes, because He lives, we shall live also.  I have had the song "Because He Lives" playing through my head the past few days, and it has been a blessing to think on all that is ours because He lives!

Today, Mr. T and I would like to wish all of our friends a blessed and meaning-filled  day of celebrating Christ's resurrection.  "He is risen, as He said"!  (Matthew 28:7)

Our Resurrection Day celebration will begin with a meaningful outdoor service and a bountiful breakfast with our church family.  We hope that all of you will have as lovely a day and that you will spend time pondering on what Christ's resurrection means for you personally.


Here are a few vintage Easter cards from my collection.

And now here are a few cross-shaped cards.  I never set out to collect these, but they seem to have found me one way or another.  They are pretty and meaningful.
The two just above could not really be said to be vintage, but they are  springlike and full of meaning for believers.  Hope you have enjoyed seeing these little Easter cards! 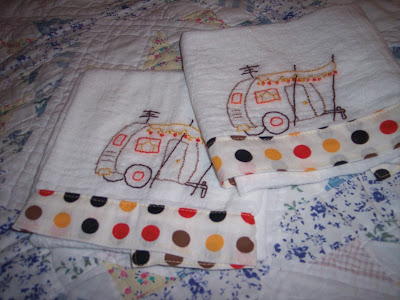 A couple of people have asked about the designs I used on the embroidered vintage camper dish towels.  I actually did an entire post concerning this several years ago.  You can find it here: Vintage Camper dish towels.  In the post, I have links to the site where I found the transfers and also to the tutorial for the fabric borders on the towels above.

To read all about it, check out the link above.  The towels are just ordinary flour sack towels from Walmart (cut in half and raw edges hemmed).  For the vintage camper design, I used the Camp Out transfers available from Sublime Stitching.  Although the edgier designs on this site don't appeal to me at all, some of the transfer sets like Camp Out, Forest Friends, etc. are cute.  I have used this camper design a bunch of times and the transfer is still working perfectly.  I must say it is probably the best and longest-lasting transfer I have ever used.

As noted on my  previous post, I've made several different tea towels with the Camp Out transfers.  Others might also be interested in a Christmas ornament/decoration I made with the same transfer design, so here's a picture of that. 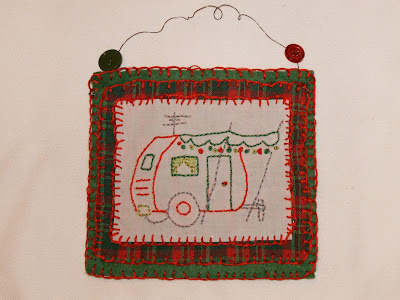 Hope this answers your questions about the embroidered vintage camper towels.  Happy stitching!
Posted by Mrs.T at 7:36 PM No comments: 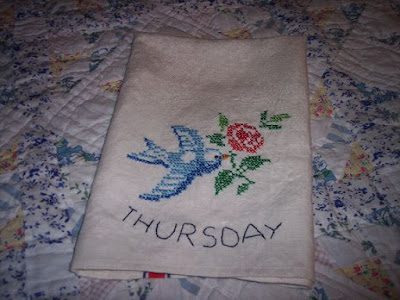 Okay, by now probably everyone is bored with my dish towel obsession.  However, I am going to share just a few more of these.  Life is crazy for me right now and these older photos are something I can share easily.  So here goes.


Hope you have enjoyed this simple peek at some of my embroidered dish towels.  Sharing with Sandi's  No Place Like Home today, and with Stephanie's last (boo hoo!) Roses of Inspiration.  Also sharing with Bernideen’s Tea Time, Cottage and Garden Blog Party, Share Your Cup Thursday and Vintage Charm.  You will want to visit these fun link parties and get some wonderful inspiration for Easter and springtime!
Posted by Mrs.T at 7:03 PM 17 comments:


Last week I shared my fine china-themed embroidered kitchen towels.  This week I am going to share some more recent projects, a set of four towels from the Aunt Martha's "Java Break" transfer designs.  (I should clarify that and note that when I say "more recent", I mean within the last couple of years.  I made these for my daughter Carrie a couple of years ago.)
As usual, I used flour-sack towels from Wal*Mart, which I generally cut in half for dishtowels as I think the full-size ones are just too unwieldy.
If you are interested in using some of the same transfers as I did, here are the Fine China ones:  Fine Chinaware transfers.    And the Java Break ones are here: Java Break transfers.  While you are at the Colonial Patterns (Aunt Martha's) site, be sure to spend some time looking around.  They have loads of designs that might interest you.  There's a set called "Floral Teacups", another called "Floral Teapots" and many, many more designs.  You will be amazed at the variety.  There is one entire section just for day-of-the-week towels.  If you enjoy embroidery, you will love this site.  The transfer sets I've looked at are only $1.60!
I trimmed these towels with coordinating fabric borders and had such fun choosing the colors!

I am sharing today with No Place Like Home and Bernideen’s Tea Time, Cottage and Garden Blog Party, as well as Roses of Inspiration.  Also sharing with Vintage Charm and Share Your Cup Thursday.  Be sure and visit these lovely link parties for some fun and inspiration!
Posted by Mrs.T at 7:58 PM 30 comments:


Have you heard the saying (I'm sure you have!) "Chocolate is the answer; who cares what the question is?"  Some days are like that!  Lately I've tried a few good chocolate recipes and have been intending to post about them for awhile.  So, here goes!

I'll start with a simple mint brownie recipe.  Last spring we found the Winter Toll House baking morsels from Nestle's on clearance at Wal*Mart at a greatly reduced price.  If memory serves they were maybe 39¢.  These are simply a swirled dark chocolate and mint morsel.  They work well in place of Andes mints in my Chocolate Mint Crisps that I always make at Christmas.

I recently found a couple more bags of these morsels in my pantry and was trying to think of a way to use them in a bar cookie.  I recalled that my favorite brownie recipe calls for a cup of chocolate chips, which I often omit.  Why not use a cup of winter morsels instead, I wondered?  These turned out to be so delicious that the remaining morsels will go, one cup at a time, into brownies.

The brownie recipe is the best I’ve ever had. It came originally from my pastor’s wife, and I still want to give her credit for this great recipe even though I’ve changed a couple of things.

Sift together the flour, cocoa, baking powder and salt. Set aside. In a mixing bowl beat together the remaining ingredients. Sift in the flour mixture and stir it in thoroughly. (Here is where to add your 1 cup of winter morsels or chocolate chips if you like.) Scrape into a greased 13x9” pan. Bake at 350 for 25 minutes or just until done. Don’t overbake or you’ll lose the fudgy texture.

The next recipe I tried was Moose Tracks Cookies from Jocelyn at Inside BruCrew Life.  These include lovely ingredients like white chocolate morsels and chopped peanut butter cups.  I happened to have both on hand and wanted to use them up, so this was a good use.  Don't be surprised, but the recipe calls for only 1/4 cup of flour.  And yes, that actually works.  I did refrigerate the dough for awhile before baking it, and I also kept it in the fridge when I wasn't actually working with it.

I rolled the dough into balls because that is just my preference when baking cookies. Because of this, my cookies were rounder and less flat, but I'm sure they were no less delicious.
Lastly but certainly not least is the Cocoa Dreams  recipe from my blog friend Vee.  Oh, are these ever good!  (I doubled the recipe and used a 13x 9 pan.)  A nice shortbread layer is the base, and then there is a gooey chocolate layer.  You top with buttercream frosting and chopped walnuts.  These bars are indeed the stuff that chocolate dreams are made of.  Here are a couple of Kindle photos:
I had seen a recipe for buttercream frosting with marshmallow fluff in it and wanted to try it.  But when I found it, it was a huge recipe, intended for frosting and decorating a layer cake.  So I went looking through my old Cook & Tells and found the perfect one.  I cut the recipe in half for this and it worked admirably.  Here's that recipe as I made it, with the ingredients halved:

Beat the softened butter with an electric mixer on medium speed till creamy.  Beat in fluff until well blended.  Beat in the sugar and vanilla.  Increase the mixer speed to high and beat 3 to 4 minutes, till fluffy.  Makes about a cup and a half of frosting.

Since both bars and frosting are rich, I thought this frosting layer didn't need to be overly thick.  This was just right.

I will share just one more recipe since it's been on my mind (and my palate) lately.  I've made this old favorite Chocolate Pudding for One several times as a meal (!) since having a wisdom tooth extracted last week.
This winter when Toll House baking morsels were on sale for weeks for 2/$4 at our local supermarket, I bought bag after bag of the dark chocolate variety for my pantry once I tried them and found out how wonderful they are.  I've been using those in the chocolate pudding recipe and oh, is it delicious.

In the mood for chocolate?  Give one of these delicious recipes a try. 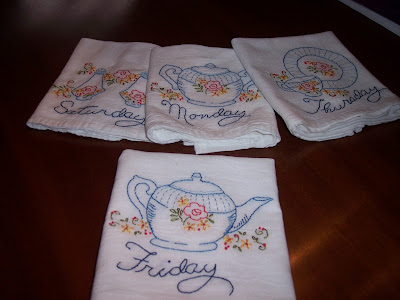 Today I'm going to share some photos of embroidered dish towels which I made some time ago. These were a gift for my daughter Joanna. The transfers are from the "Fine China" designs by Aunt Martha.  These are some of the most fun designs I've ever stitched; a close second would be the coffee-themed ones which I made a couple of years ago for my daughter Carrie.

I'll just add in some pictures and captions.  I've shown some of these here and there on the blog before, back when I was working on them, but I believe this is the first time I've put them all into a post together.  Enjoy!
I'm sharing this week with Sandi's No Place Like Home and Bernideen’s Tea Time, Cottage and Garden Blog Party, and also with Vintage Charm,  Share Your Cup Thursday,
and Stephanie's Roses of Inspiration.
Posted by Mrs.T at 10:40 AM 40 comments: