Many years ago when our daughters were at a boarding high school, they often brought friends home with them for the weekend.  At that time we kept our boxes of herbal and flavored tea neatly stacked in a kitchen cabinet.  Neatly, that is, until one went to pull out a particular box of teabags.  Then the stacking system revealed its inadequacies and instability.

I will never forget how embarrassed I was one weekend when some of the girls were making a cup of tea.  One of them reached for a particular flavor, and at least a half dozen boxes came out of the cabinet with it in a mini-avalanche of tea boxes!  Yes, we had come to the point where we had so many tea boxes that they began tumbling out of the cupboard.  Obviously, we had to figure out different storage for them.

I had seen a rack for holding tea boxes offered in a tea catalog for around $80. It was beautifully constructed -- out of oak, if I remember right.  I showed it to Mr. T.  He figured he could make a “rustic” one out of pine to serve the same purpose, and he did. It's still serving us admirably after all these years. I couldn’t get a photo that showed the top shelf (too narrow of an area where the rack is located next to our back door), but the top shelf could be used either for display (which I do) or for 2 additional tea boxes.

Mr. T would want me to caution you, I know, that this rack is what he calls “rustic, very rustic.” It is  by no means fine carpentry and he realizes that. But it's a wonderful storage solution and is commented upon by almost everyone who spends any time in our kitchen.

It's fun, when visitors come and we offer them tea, for us to just point them to the tea rack and let them choose the flavor they like. 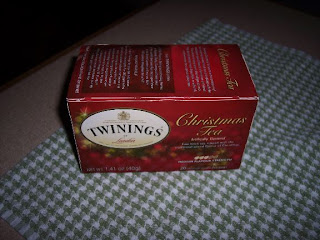 At the bottom of the rack, I have hung a teapot hanging made out of felt from a kit some years ago. I’ve always wanted to make another, and saved the pattern just in case. And after many years, I did make another, this for a dear friend. 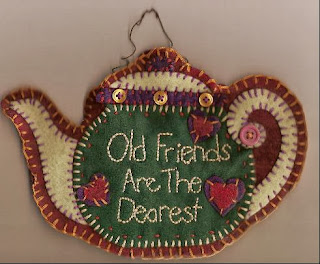 And then this final photo, which was not taken in my kitchen, but instead in an apartment kitchen in faraway Nevada. My daughter who lives in Nevada wanted a tea rack like mine, so on one of our first visits there,  Mr. T and our son-in-law worked together to make one. It’s so neat to think of her having something just like mine, that was handmade and designed by her dad, in her kitchen too.  Ten years later, with six growing children, they are no longer in a small apartment, but in a house, where the tea rack is on a dining room wall. Hope you have enjoyed seeing this  simple tea rack.  If you also have issues with the current system you're using to store your boxes of tea, you might like to think about constructing one for your own use!  Mr. T won't mind a bit if you borrow his "rustic" idea!

I am linking up today with Sandi's No Place Like Home at Rose Chintz Cottage  and Bernideen’s Tea Time, Cottage and Garden Blog Party.  Also with Roses of Inspiration  and Share Your Cup Thursday.