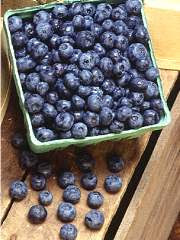 I wish that I had thought to take a picture of these pies ... but sadly, I did not.  Back a couple of weeks ago when I made a blueberry buckle, I came across this recipe:Lemon Blueberry Cream Pie on a blog called Something Borrowed, Something Blueberry.  I saved the recipe because it sounded so good.

Well, let me tell you, it IS good!  I made two of these pies for Sunday's potluck at church.  The recipe stated that the pie was best served the day it was made, but I couldn't do that, as I needed to make them the day before.  The only thing I did on Sunday morning was to make some lemon-flavored whipped cream to put on top.

I made one of the pies with a homemade graham cracker crust (baked) and the other with a gluten-free baked pie shell, also homemade.  I only tasted the gluten-free one, but the other pie must have been fine too, because not a scrap of either one was left.  This is definitely one of the most delicious pies I've ever tasted.

Basically, the filling is similar to a lemon meringue pie filling, only with blueberries and sour cream added.  Don't try this with frozen blueberries, as I fear the results would be very disappointing.

The only thing I did differently was to use whole eggs instead of egg yolks -- long ago, my mother taught me that a whole egg could be substituted for 2 egg yolks.  This pie calls for 3 yolks, so I probably wouldn't have attempted this substitution except for the fact that I was making two pies.  Thus, I would need 6 yolks, so I successfully substituted 3 whole eggs.

This substitution did make the filling a paler yellow, and I probably would have added a drop or two of yellow food coloring if I hadn't been out of that.

If you are making only one pie, go ahead and use the 3 yolks and find another use for the whites.

For the top, you could use cool whip, but I would suggest real whipped cream.  I gilded the lily even further by making it a lemon flavored whipped cream.  For the 2 pies, I whipped 2 cups of cream, adding in 1/2 cup confectioners sugar gradually after the cream reached soft peaks.  I continued beating until the cream was in stiff peaks, adding 2 tablespoons of lemon juice, a tablespoon of vanilla and 1/2 tsp. of pure lemon extract.  (If I'd had another lemon, I would have used a couple teaspoons of lemon zest instead of extract.)  If you are making only one pie, simply halve all the quantities in these whipped cream directions.) I spread the whipped cream all over the top of each pie.

People were raving over this pie!  And my hubby and I were very sorry there was none left over.
Posted by Mrs.T at 9:33 AM