One really neat way to "frame" a cross-stitch picture is to use fabric to turn it into a wall hanging. I just did this with a belated Christmas gift for a loved one, and was so pleased with how it turned out. I do apologize for the edges of the calendar you can just see hanging behind the project. I wanted to get a photo very quickly. 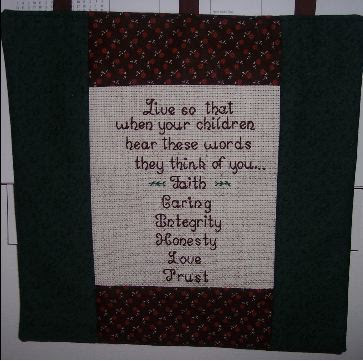 I had seen a similar saying to this as an embroidered, framed-under-glass piece in a catalog. I tweaked the saying a bit and used graph paper to "translate" the words into back stitch. I stitched this on fiddler's cloth for a rustic look. The one in the catalog was matted in two dark prints (black and brown, I believe). I liked the look of the dark colors, so chose brown and dark green to pick up the colors of the stitchery.

Some time ago, I also used this method of "framing" on a cross stitch piece I had stitched years ago and which was just sitting around in a stack of unfinished projects. Again, I was very pleased with the result. I have this stitchery hanging near the area where I sew, where it fits very nicely. 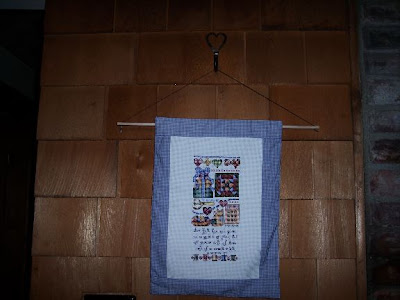 If you have never tried framing stitchery with fabric, it's very easy. You can either use all the same fabric as I did in the lower photo, or two different ones as I did in the top photo, for a patchwork look. I suppose for certain projects that one could even use four different fabrics and that might be very effective.


Now for the side pieces. You will measure vertically now, the length of the stitchery which has now become greater because of the top and bottom frame pieces you sewed to it. Again, using the example of an 8 x 10" stitchery with a 2" wide frame, you would cut the side pieces 3" by whatever the finished length of the piece turns out to be -- about 12" if I figured correctly. Again, pin and sew the side pieces in place along each side of the stitchery/frame piece. Press the seams toward the side frame pieces. Press on the right side too and again trim off any frame edges that don't line up with your stitched piece.

Now you will make a backing piece for your stitchery. You can either use fabric that matches your frame, or something generic like white, black, or ecru since it isn't going to show much, if at all. In the top photo I used a matching green print. For the one in the lower photo I used white. Simply measure the finished piece and cut a matching piece to use for the backing. Sew the two pieces together with right sides facing, leaving an opening for turning. Turn right side out, press, and then hand-sew the opening closed.

For hanging the finished piece, you have several options, and these are probably best done before sewing the backing on, but I didn't do this in either case. In the top photo, I sewed loops of folded bias tape to the back by edge-stitching with the machine (and in the process closed up the turning opening, so I could skip the hand-sewing step). It looks fine, but would have been better if I had basted the loops in place before sewing the two pieces together and turning them. In the lower photo, I hand-sewed a piece of wide bias tape to the back to use as a casing. In both cases, I used dowels and hangers recycled from old calendar towels to hang the stitchery from. You may well think of a better way, but this worked for me.

You might like to try this quick and easy way of framing your stitchery. I probably wouldn't use this for a really "heirloom" type of project, but for things you don't have a lot of time or effort invested in, it's a great solution to the framing dilemma.
Posted by Mrs.T at 11:22 AM