A couple of weeks ago I talked about taking a "mental health day" (or more accurately, an afternoon) and today I want to share some "mental health moments" from this past weekend.  What is the neatest thing is the way they came about.

For months now, at least since January, Mr. T and I have been thinking about a getaway.  For various reasons, mostly involving eldercare needs, we have had to put it off.  Originally we were thinking about an overnight getaway and even had a destination in mind.  But a couple of weeks ago, I began to feel that we needed something more relaxing.  A cabin, maybe, not a hotel room.  With a water view.  A situation where we could prepare our own simple meals and not be dependent on restaurants.  And so on.  When I mentioned these thoughts to my hubby, he heartily agreed and added his thought that we should take two nights, not just one.  Those plans are still in the works and may be a long way off.  However, in the meantime ... 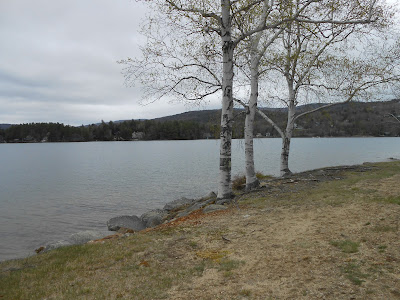 Last week my desire for tranquility became so great that I had this thought:  what if we take our camping chairs and maybe a snack and just go to the water's edge somewhere and just sit for a few hours?  I even had a place in mind, a public beach at a nearby lake which I was pretty sure would be very uncrowded at this time of year.  I didn't voice this thought, though, as our week was very busy with work, errands, and eldercare.  Remember, I never said a word about it.  The neat part is about to happen.

So, on Saturday after lunch Mr. T asked, "I know we're both really busy, but do you think you could spare an hour or so?  I was thinking we could take our camping chairs to the public beach and just sit and watch the water for a little while."

He was dumbfounded when I told him I had had the exact same thought just a few days previously.  We concluded that there was absolutely no doubt as to what we needed to do, so promptly packed up the chairs, grabbed a couple of apples, and headed out.  The day was dreary and overcast, but at least there was no rain.  We encountered a cloud of bugs when we first moved toward the water, but a breeze picked up and kept them away. 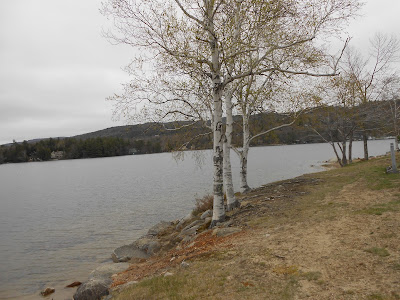 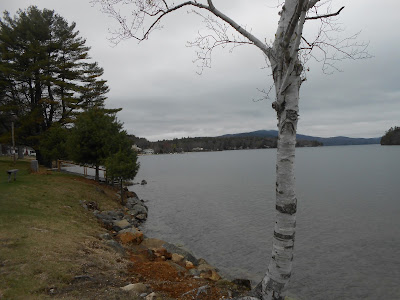 It was quiet and tranquil with just the sounds of water (and passing cars in the background, for a road was behind us).  We soaked up the serene view of water and  trees, noticing those pretty pastels of trees that are just leafing out.   The picture below is of our own woods in a previous spring.
If you look closely you can see not only a spring green tree dominating the photo, but a pinkish tree to the left.  We saw trees similar to this across the lake, but were not close enough to get photos. 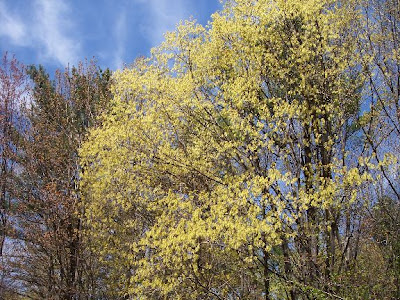 We stayed perhaps a half-hour or a little more and then reluctantly left for home. 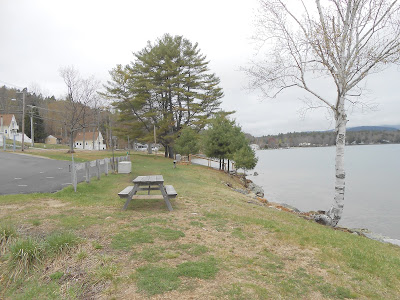 And, although I have no sunshiney, sparkly photos to show for our mental health moments, I have something even better -- the sure knowledge that our all-wise, all-knowing, all-powerful Creator God always knows what we need and is faithful to provide it -- in the greatest detail.
Posted by Mrs.T at 2:52 PM