Where does the time go?  Wednesday again -- so it's time for the Hodgepodge with Joyce and friends at From This Side of the Pond.  No Hodgepodge last week, due to exciting happenings in Joyce's life, so it's been a couple of weeks.  Time has flown!  But head on over, get the questions, and then answer them on your own blog (or in the comments if you don't have a blog).  Then go back over to Joyce's to link up!   Here are this week's questions:

1. April is National Jazz Appreciation Month. Are you a fan? If so what's a favorite you'd recommend to someone new to jazz listening?

Not really a jazz fan.  I don't mind it as background music sometimes.  I haven't listened to enough of it to have any favorites.

2. Mandolin, ukulele, harp, accordion or banjo...which would you be most interested in learning to play? Or do you already play one of the instruments listed?

I don't play any instrument at all, period.  I enjoy listening to all of those instruments on the list, with my favorite probably being the harp, and truly admire people who can play them.  I doubt I could learn to play any of them, especially not the accordion.  Too much to think about.

3. Do you judge a book by its cover? Elaborate. You may answer in either/both the literal or figurative sense of the word.

I try not to judge a book by its cover, especially in the figurative sense of the word with regard to people.  And I hope they do the same with me.

With actual books, I might be more apt to judge a book by its cover. I do know that sometimes the cover design is not necessarily what the author has in mind, but often the author does have some input.  So if a cover is off-putting to me, I'm probably not going to buy the book, though if I'm in a bookstore or library I would pick the book up and leaf through it before making a decision.

4. According to a recent study the ten most nutritious foods are-almonds, cherimoya (supposed to taste like a cross between a pineapple/banana), ocean perch, flatfish (such as flounder and halibut), chia seeds, pumpkin seeds, swiss chard, pork fat (shocking! but I don't think they mean bacon), beet greens, and red snapper. Are any of these foods a regular part of your diet? Any you've never ever tasted? Which would you be most inclined to add to your diet?

Of all those, I think the only one that's a regular, nearly daily part of my diet is almonds.  I think the only one I've never at least tasted is cherimoya, which I've never even heard of.  I'd like to try that and maybe even add it to my diet if it wasn't too pricey, because it does sound like a nice flavor.  I've been trying to add more fish to our diet, which has been less expensive recently since it was on sale often during Lent.  I'd like to add more Swiss chard (I especially like the rainbow chard) and chia seeds to our diet.

(What do you think they are talking about when they say pork fat?  Lard?) 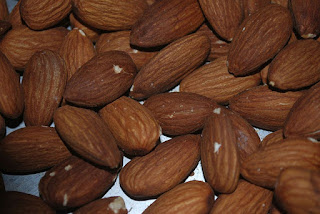 5. Besides a major holiday what is the most recent thing you've celebrated with your people? Tell us how.

My oldest daughter's birthday.  She and her hubby and four kiddos came for supper on Sunday night.  I served Chicken Chili Lasagna 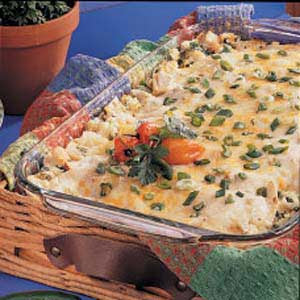 along with guacamole, tortilla chips, and fruit salad.  The salad was just layers of [mostly] thawed frozen fruit including mango chunks, watermelon balls, and a mix of strawberries, pineapple and blackberries.  The kids loved it and only a few pieces of fruit were left in the large glass bowl at the end of the meal.  My daughter baked her own birthday cake, as she had planned a special coconut cake at Easter and they were all sick.  So she just baked it for her birthday instead! 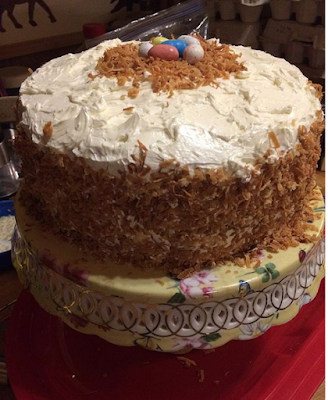 They had an interesting time transporting the cake over here.  They live on a dirt road and it's a mess this time of year.  But the cake, on its cake stand and swathed in foil, survived unscathed and was incredibly delicious.  We provided ice cream: vanilla bean and maple walnut.

In between the main course and dessert, the birthday girl opened her gifts from us.  We also watched a slideshow of pictures from a family long weekend in 2012.  Something like this happens so seldom (since our youngest and her family live way out West) and the kids were tickled to relive the memories of that time in a lakeside cabin.

So looking forward to a short getaway later this month.  We need it!

So ends another Hodgepodge.  Happy Wednesday, all!
Posted by Mrs.T at 5:00 AM