Memories of a Summer Place 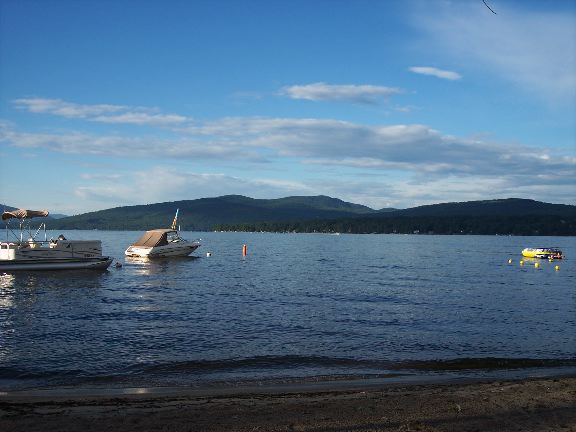 It’s been well over 30 years now, but once upon a time I had the delightful summer job of being “second cook” at a beautiful New England inn by a lake. I worked two days a week, substituting for the chef on his day off and then for the pastry cook on her day off. It was the “chef” part that terrified me, but I was assured the menu would be made easy for me, and it was. Fortunately, this was a place with a limited menu -- the sort that may change a bit everyday but is short and simple enough for a waitress to recite from memory. I will never forget how scared I was that first day as I arrived at the basement entrance to the kitchen in the early-morning hours. I knew one lady who had assured me she would be praying for me -- that was my first real experience with actually sensing that someone was praying. Soon enough, the job settled into a routine and I enjoyed almost every moment of it.

The waitresses were around my age or a little younger, mostly college or high school girls from wealthier families. Their uniforms were unusual then and would be even more so now, when most waitresses seem to wear jeans -- or, in the dressier places, shorts or slacks. These uniforms were flowered print dresses in a sort of dirndl style, very demure. As I mentioned earlier, the menu could be recited easily from memory, although it varied each day, and the waitresses were required to do so. They were also required to memorize their orders -- nothing so lower-class as an order pad would be in view here! It got rather complicated at dinner if one had a table of ten or twelve! At breakfast, they squeezed fresh orange juice for those at their tables who ordered it.

At lunch, one thing I particularly remember is that there was a bread basket. The contents varied with the day, but there was usually some sort of muffin or quick bread along with the rolls and bread. All the food here was homemade, but I guess that goes without saying. I remember making donut muffins, blueberry muffins, banana bread, lemon bread, apple bread -- and two kinds of apricot bread, dark and light. Many of the recipes were quite unique to the inn or its pastry cook, and thus new to me. I itched to copy some of them down to use at home, but that was forbidden. So, in my free moments I put my mind to work memorizing the recipes, and wrote them down when I got home. Sometimes it took several tries to memorize the longer recipes, but I eventually got the ones I wanted. After all, I had no intention of competing with them or selling their recipes -- I just wanted some yummy new things to try out on my family and/or guests.

Desserts have always been fun for me to make, so the pastry chef part of the job was a dream come true! The lunch desserts would be things like gingerbread with whipped cream, or grapenut pudding. Ice cream was always on the menu, but I believe the flavor selection was quite limited. Like maybe vanilla, chocolate, or strawberry. The dinner desserts, however, were fancier and even more fun to make. I remember a 3-layer chocolate cake decorated with walnut halves; a tall walnut chiffon cake; a special ice cream pie that was one of the inn’s signature desserts; and a delicious lemon meringue pie. There was also a special berry cream pie in which the top layer was a glaze made with fresh strawberries, raspberries, or blackberries. The bottom layer was simply billows of freshly whipped cream, sweetened only with a bit of vanilla and piled in a pastry crust. It was a truly heavenly dessert.

The “chef” part of the job was not too bad. They kept it very simple on the nights I cooked. There was a wonderful entree made with mushrooms and boneless chicken breasts that I could easily do. Back then, boneless chicken breasts were practically unheard of unless you boned them yourself. But these had been purchased frozen, if I remember right, and after we had doctored them up with mushrooms, broth, etc. they were very good. The accompanying vegetables were served in heavy silver divided vegetable dishes -- dinner was served family style. I really can’t remember much about what was served at those meals. Sometimes baked potatoes, or mashed potatoes, or parsley potatoes, or occasionally rice pilaf, I think. And of course other veggies like carrots, or mashed squash, peas, green beans -- possibly even brussels sprouts. It’s clear to see that my heart was really not in this part of the job!

After dinner, the waitresses brought out trays of crystal finger bowls filled with water for the guests to dabble their fingers in.  This still amazes me.

One of the neat things about this inn was that it had its own gardens -- both for fruits and vegetables and a cutting garden to provide flowers for the tables. An elderly local man maintained the gardens, which were just beautiful and were located out back between the inn and the lake. I can see the walk-in coolers now, loaded with boxes of freshly picked strawberries, raspberries, and blackberries in their respective seasons.

This wonderful New England inn no longer exists, but what a wonderful memory to share with those around my kitchen table today!
Posted by Mrs.T at 5:01 PM