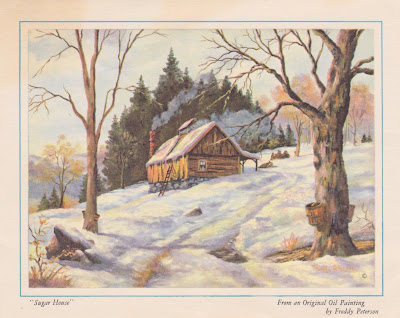 Although I still haven't written the post about my maple-scented memories (maybe later this week), I am putting together just a simple maple-related post, using some recently discovered vintage items, for the first day of spring.

Lately I've been doing much sorting and decluttering of old keepsakes.  One of my favorite recent finds was the note card above.  I'd be keeping it regardless of the picture on the front, because the note inside was written by a great-aunt I didn't know well.  She was thanking my mother for sending her and my great-uncle a photo of us kids: "What a pretty little group they are."

The note card, though, depicting a hillside sugar house, is just beautiful.  Here's what it says on the back of the card:


"SUGAR HOUSE"
famous for its aroma of maple sugar and
hickory smoke, is from an original oil
painting by Freddy Peterson, who was born in
Denmark and studied extensively in Europe
before entering the United States in 1924.

The card was a product of Scenic View Cards in Hanover, Massachusetts.

(Do be sure and click to enlarge the card and see the details.)

As I've said before, I grew up with sugaring.   It's an important part of who I am.  So I was just thrilled to find this beautiful note card.  But there was more.

I'm not sure if all states do this (I believe they do) but in New Hampshire the fourth graders get a special emphasis on state history.  That's often the time for field trips to the state house and to the NH Historical Society Museum and so on.  The students have to do some sort of report or research project on state history.

Back in the day (a l-o-n-g time ago) when I was in fourth grade, the requirement was the same.  That may be when it all started, for all I know.  In my elementary school years, educational television was becoming the latest and greatest thing.  With my classmates, I'd leave the classroom on certain days each week and walk down, then across, the street to a different building and file into the basement where we had classes on music, French, and New Hampshire history at varying times.   (From what I recall, the music classes were not on TV.  All I really remember of them was that we had music books and that we learned to sing a lot of songs from them.)  Although the televised teachers did their best to make the state history and the French classes interesting, they did not really hold one's attention.  I suppose that is why I didn't really grasp the importance of either state history or the required project.  I vaguely remember doing much of it at the last minute and not getting a wonderful grade on it.

Fast-forward to my sorting and decluttering spree and I found the report with other keepsakes in an old desk.  There were a number of New Hampshire postcards stapled or taped to the pages, and also a couple of New Hampshire-related poems clipped from a newspaper.  One of the poems, and one of the postcards, are sugaring-related and so I am sharing them in this post.
The poem is called Harbinger of Spring and the author simply signed him or herself as "Word Lover."  Here it is:

HARBINGER OF SPRING
It's sugarin' time in New
England hills
And that's a sign of spring,
When warmth of sun and
wakening life
The magic flow will bring.

The trees are tapped, the
pails are hung,
The wood is amply piled,
To keep alive the roaring
fire
Until the sap is "biled".

The hours of toil are long
and weary
When sugar' time comes
round;
There's many a trip 'tween
tree and vat ----
But eager joys abound.

After boiling's done, comes
sugarin' off
And with beautiful amber
glow
The syrup becomes
delicious taffy
When poured on pure white
snow.

Whoever Word Lover was, I appreciate their poem.  I hope you have enjoyed it -- and the other sweet vintage delights -- as much as I enjoyed finding and sharing them.
Posted by Mrs.T at 11:10 AM