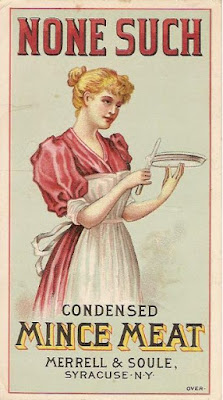 Yesterday at church we had a harvest dinner theme to our potluck.  One lady cooked a turkey and  others brought fantastic side dishes, salads, and pies.  For my pie contributions, I used one old favorite recipe and one that was brand new to me.

The old favorite was this 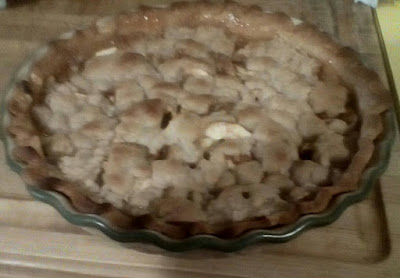 Begin by mixing together the brown sugar and spices in a small bowl. In the pie shell, alternate layers of apples with the spice mixture. Sprinkle each layer with lemon juice before adding another layer. When all apples and spices are in pie shell, make the topping by mixing the sugar, flour, cinnamon, and dash of salt in a medium bowl. Cut in the butter with a pastry blender until crumbs form. Top the pie with the crumb topping.

Bake the pie at 450º for 15 minutes; then reduce the heat to 350º and bake 30 minutes more. Serve warm if desired with cheddar cheese or ice cream on the side.  (For the potluck, I served it at room temperature and did not serve with either ice cream or cheese.  Every scrap of this pie was eaten!)

This excellent pie comes from Jane & Michael Stern’s wonderful cookbook, Square Meals. I have made this pie so many times that its page in my handwritten cookbook is freckled with apple juice and spices!

Now don't look at the several steps and decide this is too complicated.  It's actually very easy.  The hardest part is peeling, coring, and slicing the apples.  Once you get that solved (which I sometimes do by using one of those hand-cranked peeling/slicing/coring gadgets) it is literally as easy as pie.   My only quarrel with those gadgets is that they slice the apples a bit too thin, which can make for a mushy pie. 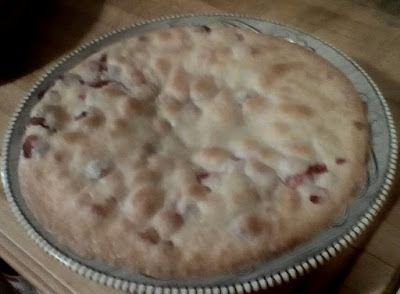 Spray a 9-inch deep dish pie pan with non-stick baking spray.  Place cranberries in prepared pie pan.  Sprinkle with 1/2 cup sugar and the walnuts; stir to combine.  In a bowl, mix remaining 1 cup sugar, melted butter, flour, eggs, and vanilla with a whisk (I used a hand mixer).  Pour this batter over the cranberry mixture in the pie plate.  Bake at 325º for 45 minutes or until brown.

Another time, I may cut down on the sugar in the batter part of the recipe.  I think 3/4 cup would be plenty.  The recipe also called for 1/4 cup of oil, but I didn't use it.  I felt that oil was unnecessary since there is quite a bit of butter in the recipe already.  It turned out very well and I will make this again, likely at Christmas time.

If  you needed some fresh inspiration for Thanksgiving pies, I hope you have found some here today!
Posted by Mrs.T at 10:50 AM