Ever make a dessert in a slow cooker? 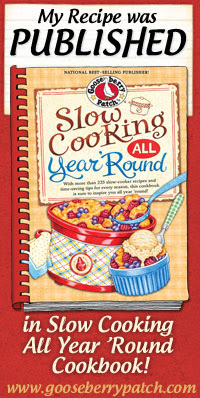 I hadn't, until recently.  The concept has been around for awhile, but most slow-cooker dessert recipes call for a smaller cooker than what I have had.  Then I inherited a 3-quart crockpot with a removable Corning Ware casserole as the liner.  At first I used it mostly for smaller main dish recipes or for side dishes like vegetables.

Recently it occurred to me that now I could try one of the slow-cooker dessert recipes that so intrigued me.  I could take them to Sunday potluck lunches at church so we wouldn't have any leftovers tempting us at home.  I've now tried two recipes and am sold on this idea, especially for fall and winter.

The cookbook shown above, Slow Cooking All Year Round, is one that I received for having a recipe published in it.  I'm so thankful that I have this cookbook, as I have turned to it again and again.

But now I could turn to the dessert recipes!  There are 29 dessert recipes in this book.  A few of them are candies -- one combines and melts the ingredients in the slow cooker and then the mixture is dropped onto waxed paper to cool and harden.  Most, though, are some sort of pudding, cobbler, or cake.

This is really a great idea for a church potluck as the dessert can be cooking unattended in the slow cooker during the services.  When ready to eat, you have a nice warm dessert to serve.  Of course, it could also work to have the dessert in your slow cooker at home if you are planning Sunday lunch for guests or family.

In a large bowl beat butter and sugar until light and fluffy.  Beat in egg white* and vanilla.  In separate smaller bowl or a measuring cup, combine molasses and water.  Sift together flour, baking soda, salt, and spices.

Gradually add the flour mixture to the butter mixture alternately with the molasses mixture, starting and ending with dry ingredients and beating well after each addition.  Pour mixture into a greased 3-quart slow cooker.

Sprinkle brown sugar over top of batter.  Combine hot water and melted butter; pour over brown sugar.  Do not stir.

Cover and cook on High setting for 2 to 2 1/2 hours, until a toothpick inserted near center of cake tests clean.  Turn off slow cooker; let stand for 15 minutes.  Serve warm, scooped into bowls and topped with whipped cream or ice cream.  Serves 6 to 8.

* Changes I made: I used a whole egg rather than an egg white because I just didn't have time to separate an egg right then.  The recipe did call for 1/2 cup chopped pecans in the batter, but I left those out.  I also used less melted butter at the end than called for; it called for 2/3 cup, which would have been impossibly rich.  It is a very rich dessert as it is.  Next time, I am going to try just 1/3 cup of melted butter, or maybe even 1/4 cup.

To make this at church, I had everything in the slow cooker except the hot water and melted butter at the end.  I just added those at church before turning the cooker on.  We just brought along a container of French vanilla ice cream to serve with it.

This dessert got rave reviews from those who tasted it.  It's delicious!

In a large bowl, toss together apples, cinnamon, and nutmeg; transfer to a greased slow cooker.  (I just tossed them together IN the slow cooker.)

In a bowl, blend eggs, milk, vanilla, sugar, 2 Tablespoons of the softened butter and 3/4 cup of the baking mixture.  (I beat them together with a hand mixer.)  Spoon this batter over apples.

In a small bowl, combine the brown sugar with the remaining baking mix and remaining softened butter until mixture resembles coarse crumbs.  Spoon brown sugar mixture over batter.  Do not stir.

Cover and cook on low setting for 6 to 7 hours.  Serve warm, spooned into individual bowls and topped with whipped cream or ice cream.  Serves 8 to 10.

I would not call this a pie, exactly; it was more of a cobbler.  But still very delicious!

So there you have it!  Some readers had been asking for the Gingerbread Pudding Cake recipe.  Now you can choose from two slow cooker dessert recipes if you are interested in trying this concept.  (And I highly recommend Slow Cooking All Year Round, too.)  Enjoy!
Posted by Mrs.T at 11:16 AM