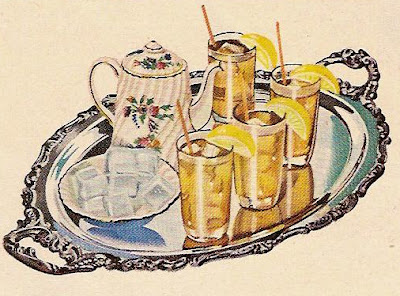 And the times lately have certainly been desperate as far as heat and humidity are concerned.

However.  There are times when a lightly sweetened iced tea is just the ticket.  We've had an unusually long spell of heat and humidity and I have found myself making a jug of iced tea twice during it.

I do use my daughter's recipe,  which is a good bit healthier than my mother usually made iced tea.  (She used a can of lemonade concentrate, replete with high fructose corn syrup I am sure.  Though, in her defense, I do remember many, many years ago when she used lemons and sugar instead.)

I have copied and pasted Carrie's recipe just as I wrote it in a 2007 blog post.  When I've made this during those desperate times this summer, I've made half a batch.  And I've used brown sugar, which feels just a tiny bit healthier and adds a bit more depth to the flavor.

If heat and humidity have you desperate, too,  you might like to give Carrie's recipe a try!