Supper on the deck 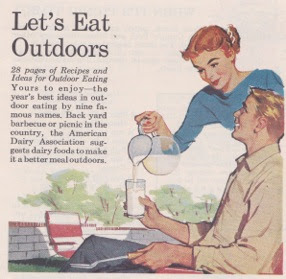 When we got our patio set at the beginning of summer, we envisioned lots of suppers on the deck.  It hasn't worked out quite as we'd hoped, although we have eaten some meals out there.  We had one entire week where it rained pretty much every day.  We had another couple of weeks when it was just brutally hot outdoors.  Even though we don't have AC, it was cooler inside the house than out, so we ate indoors.

So last Thursday night when we were ready to eat, Mr. T suggested we eat outside.  The meal I had planned and was ready to serve was just perfect for this: some simple wrap sandwiches and a pasta salad with veggies.   I'd made some iced tea, too. 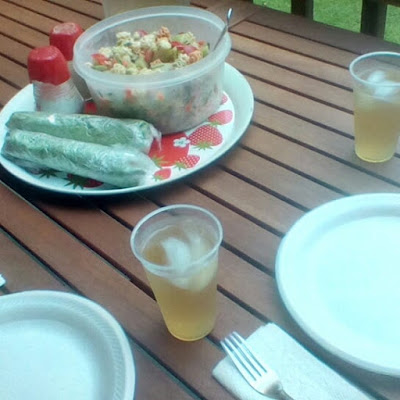 I really doubt you need recipes for these, but I will just quickly share how I made these very simple foods that work so well for al fresco dining.

Wrap Sandwiches
Some sort of flatbread intended for wraps, or flour tortillas
Some sort of spread -- mayo, mustard, barbecue sauce, pesto, guacamole, hummus
Some sort of meat, the more thinly sliced the better
Some type of cheese; I like the ultra thin slices
Vegetables like lettuce or spinach leaves, chopped tomato, chopped or thinly sliced pickles

Lay out a sheet of plastic wrap for each sandwich desired.  Lay a flatbread or tortilla on the plastic.  Spread with whatever spread you choose.  Lay a couple slices of meat on top, then a couple slices of cheese.  Sprinkle with the vegetables.  Fold in two ends of each wrap (so now you have a circle with two straight folded edges).  Roll up the bread tightly and wrap securely in the sheet of plastic wrap that's underneath it.  Refrigerate until ready to eat.

Now the pasta salad is even easier.

Vegetable Pasta Salad
12 ounces of any pasta shape -- I like either the tricolor rotini or the tricolor ruffles
1 pkg. (16 ounces) of any frozen unsauced vegetable mixture -- I like the sugar snap pea stir-fry blend or the deluxe stir-fry blend
Salad dressing to taste -- either Italian, or Greek, or some other type of savory vinaigrette
Salt and pepper to taste, or other seasonings like herbs or seasoning blends
Parmesan cheese if you like

Bring a large pot of water to a boil.  Stir in the pasta and cook as package directs.

Meanwhile, place the frozen vegetables in a large colander and set it in your sink.  When the pasta is done, pour it into the colander right on top of your vegetables.  Let it stand as it is for a half hour or so, then rinse with cold water.  You have just "cooked" your frozen veggies to the point where they will be just right in a pasta salad.

Let the pasta and vegetables drain thoroughly, then transfer them to a large bowl.  Add salad dressing and seasonings to taste.  This most recent batch that I made had freshly snipped chives and basil in it.  Sprinkle in some Parmesan cheese if you like.

Will probably make 4 to 6 servings or so.

When my hubby suggested eating outdoors, he quickly set the table.  I chose this pretty vintage tray to carry out the food and so I arranged the wraps, salad, and salt and pepper on it. It looked so inviting! 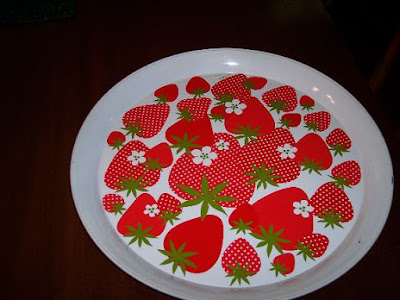 So there you have some no-recipe recipes that just might facilitate an outdoor supper for you as well!

We've decided we are going to eat supper on the deck whenever possible.  Just being out in God's creation, even in our own backyard, has such a calming and relaxing effect on us after a busy day.  Before we know it, the weather will be too cold to eat outside, so we plan to make the most of our deck and patio set throughout the summer and fall.
Posted by Mrs.T at 3:27 PM