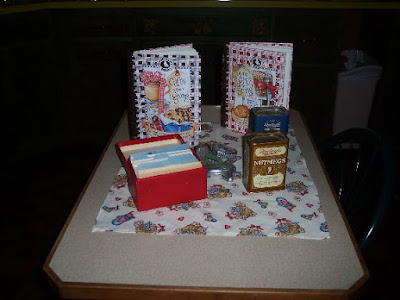 Quite a few years ago, my mother-in-law gave me two recipe boxes full of recipes that she had found at the local thrift store (or possibly the dump, I forget which).  I think they were from two different households.  One contained a good many handwritten old-world type recipes; if I remember right, they were German or Austrian.   At the time, I was appalled.  How could anyone throw away their family recipes?

Now, I find myself facing a very similar situation in my own life.  In clearing out my childhood home, I have found more recipe boxes than I would ever have thought one kitchen could hold.  That red recipe box in the photo, for example, is one that my mother put together for her high school home economics class!  My mom had actually given me that one some years ago.

I imagine you might like to see what sort of recipes are in that red box.  I, too, was interested in what a high school girl in the 1940s might choose for a home ec project.  Some, I think, were recipes that she and her family might have used, like this one: 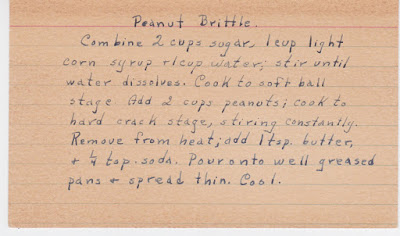 I know that she often talked about making fudge and other candy with her sisters, just as a fun activity to do after supper sometimes.  I'm guessing they may have used this recipe: 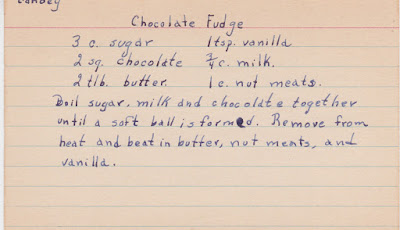 So quite a few recipes in the box seem like they could have been used in the family kitchen or copied from relatives.  But for certain categories she resorted to this: 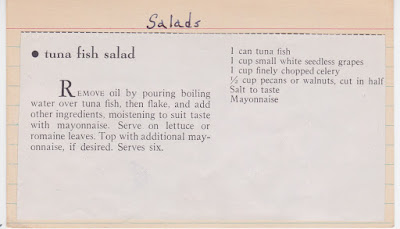 gluing a recipe cut from a magazine onto a card.  This tuna salad has grapes in it and sounds quite tasty, though I have trouble imagining how one can of tuna will feed six people.  I don't think my mother's family ate a lot of fresh salads (except with garden lettuce in the summer) at that point in time, so likely she went the clipped-recipe route for the salad category.  Many, many blank cards are also in that red file box!

But, as mentioned, there were other recipe boxes in my mom's kitchen as well.  I'm sure I've remarked before that it is not just my parents' stuff which I am clearing out.  There are items from both of my grandmothers, at least one great-aunt, my sister, and one of my brothers.  All of the ladies in this list had recipe boxes, and some of them had several.

The sugar cookie recipe below is from my aunt, but it's in my mom's printing.  My mother must have copied it out for my sister, who had one recipe box devoted just to Christmas recipes.  And she was pretty specific with the directions!  I guess she needed to be, as this would have been when my sister moved to her own apartment a couple of hours away. 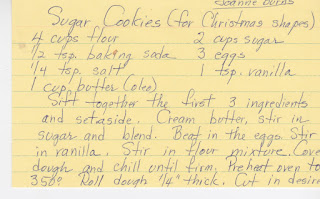 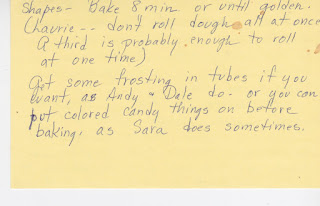 The recipe for pickles below is one that I copied from my grandmother's files as a young homemaker with a prolific garden.  It's perfect for those big yellow cucumbers that ripen before you find them. 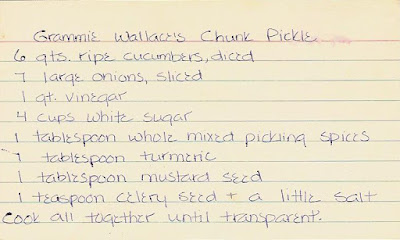 The Date Cake recipe below came from one of my mother's recipe files, but it was her grandmother's recipe, as you can see from the very old-fashioned handwriting and the skimpy directions.  This date cake was a Thanksgiving and Christmas tradition at my Grandmother's house.  It's baked in a loaf -- and my Gram always frosted it thickly with a white butter frosting and decorated the top with a row of walnut halves. 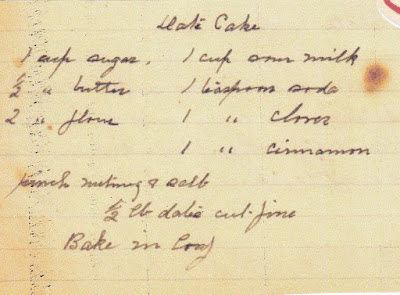 Of  course any recipe box worth its salt also contains scraps of paper with recipes scrawled on them, and these boxes were no exception to that rule.  The Date & Nut Balls below were my Aunt Dot's specialty at Christmas and Thanksgiving, but the recipe is in my grandmother's incomparable handwriting. 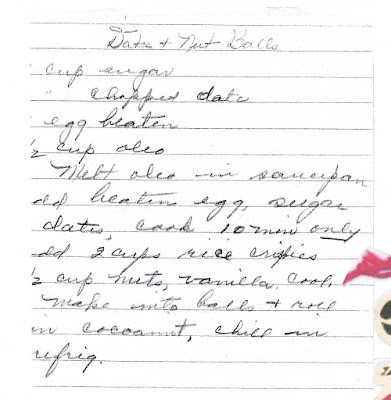 And then I've also showed this scrap of paper before.  It's my mother's famous Maple Fudge recipe, which I've posted about a number of times on my Christmas blog.  What a specialty it was! 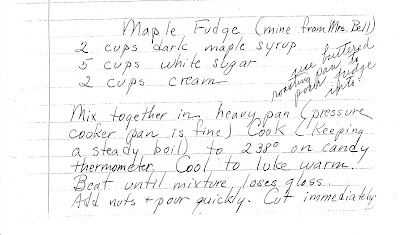 Most recipe boxes also contain recipes cut from food packaging.  The one below, from a Gold Medal flour bag, is a case in point.  Looks scrumptious!  (I've listed this clipping in my Etsy shop.)  It's fun to see what recipes people clipped.  This looks like a recipe I would like to try myself. 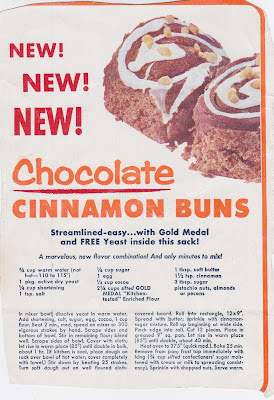 Sometimes there were thin little recipe booklets like the ones below.  These were tucked in with recipes in a box from either my grandmother or great-aunt. 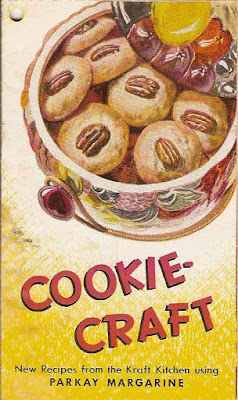 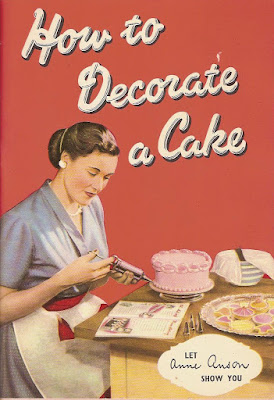 I even found a recipe holder that was not a box.  It was made from a dowel, a piece of wood, and a clothespin, then artfully painted a light green and a flower decal applied.  It still had recipes clipped to it!

My grandmother was the queen of sprucing up jars and improvised pantry storage with decals and paint.  Every jar in her pantry had a green-painted lid and an ivy decal.  [In the kitchen at the family cottage, where much of the decor in the living and dining areas had a Pennsylvania Dutch look to it, she painted the jar lids (pretty sure those were green also) and put a colorful P. Dutch themed decal on every one.  Those jars were filled with boughten cookies before the first grandchildren visited for the summer.  Oreos, Cameos, maple leaf cookies, sugar wafers -- a different kind in every jar.   But I digress.]
The recipes clipped to this dowel holder included quite a variety.  There were recipes cut from boxes or clipped from newspapers, recipes Gram had copied out or that other cooks had copied down for her.  Some were very old, others much newer.  I even found a recipe I had written out for her!  Below is a small sampling of what was clipped to this recipe holder. 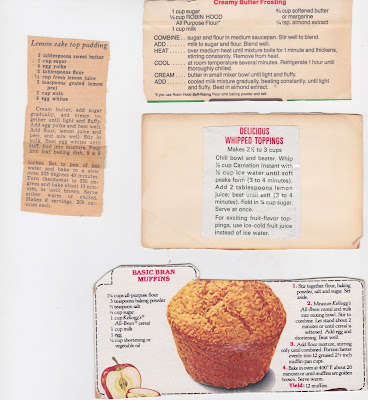 Even today I find myself saving recipes, although I seldom use my recipe box anymore.  I have many copied into books or stored in photo albums, and those have been the ones I've used the most.  Recently I put my most-used recipes printed from the internet into a huge binder, pictured below, and I turn to that often.  I also have a recipe folder on my computer desktop.  Clearly, this recipe saving trait is hereditary -- and possibly incurable. 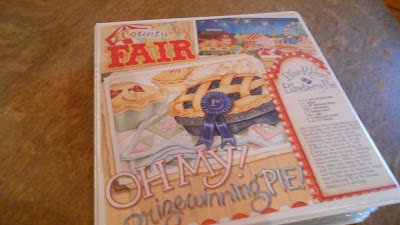 Wondering what became of those two recipe-filled boxes from the dump?  I must admit that I finally did come to the place of throwing them away.  They had become dust-covered and were just disgusting.  I knew that I would never use them, so I tossed them.  I still feel badly that someone's family recipes were thrown away, but they were not my problem.  My own family recipes are another story, and I'm still figuring out a happy ending to that one.
Posted by Mrs.T at 12:52 PM