A glance at our garden

I don't think I've posted much about our garden this summer.  It's not much of a garden, but we have had some good eating from it and should have a bit more.  We planted zucchini, tomatoes -- both regular tomatoes and cherry tomatoes -- green beans, lettuce, mustard greens (an experiment from a freebie pack of seeds), basil, and winter squash.

The zucchini hasn't done much.  Only one plant came up.  Most of the fruits were afflicted with blossom end rot, but we did get a few good zucchinis from it.  The winter squash has been about the same.  We had planted a variety -- a seed mixture that included several types of winter squash.  Only two plants came up (the chipmunks ate most of the seeds before they had a chance to sprout), and it looks as if we will have one mature squash from each plant.

The basil did great.  I planted a kind called boxwood basil with tiny leaves.  The selling point was that the leaves don't need chopping before use.   True, but one also must get all of those tiny leaves off the tiny little branches before using.  Not bad if you just want a few tablespoons, but rather time-consuming if you want to make pesto or a sauce.  I have made one batch of pesto and frozen it in 4 little zip-top bags.  I hope to make at least one more batch and also some basil butter.

The tomatoes produced well but recently developed late blight, so I have pulled up the plants.
The green beans (Blue Lake bush type) did okay, but I think next year we will go to pole beans.  We didn't get a lot of green beans, but we have enjoyed them at several different meals.

The mustard greens did well, but went to seed quickly.
No matter, they were an experiment that cost us nothing.  We found them tasty in salads and stir-fries.  There are still plenty out there, so I hope to cook and freeze a few.

And the lettuce (Black-Seeded Simpson) did best of all.  It never got bitter or tough and is still going strong.  I need to get out there and harvest more before we get a frost. 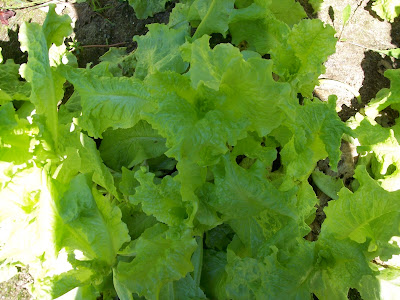 So that is our simple garden report for summer 2012.  Hoping for a better yield in 2013, but thankful for the veggies we have enjoyed from our little garden!
Posted by Mrs.T at 3:27 PM