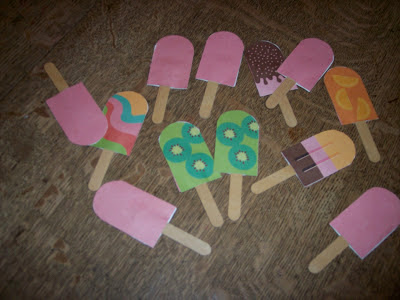 I'm still sharing links, tutorials, printables, etc. from the recent birthday gifts I made for some of my grandchildren.  This Popsicle Memory Game from Eat Drink Chic is one I've wanted to make for quite awhile.  I actually printed out the popsicles and cut them out last year, but when it came time to glue them together I was too rushed to do a good job.


We have grandkids of various ages at our house a lot, and they do enjoy playing games.  But I had noticed that sometimes they would sort of cheat at games -- for example, in Old Maid, our cards have been used so much that some of the cards (the Old Maid being one of them) are creased or torn in a way that makes them identifiable even from the back.  (I know, I know, it's time for new cards!)  And we have a set of wooden tiles with various animals.  Sometimes the kids like to play Memory with those.  And one of the tiles has some sort of trademark on the back.  By this time we all know that the picture on the other side is the bunny!


So I knew that in constructing these popsicles I would need to take care to make them as exactly alike as possible on the back sides of each.  Not something I could rush with.  So this year, I carefully scored and creased each fold, and I put a measuring mark on each popsicle stick so the exact same amount of stick was showing on each.  I knew the kids would still eventually find the matching up to be easy, but these siblings would also enjoy using the popsicles along with all of their other play food.


I made a simple label for the game 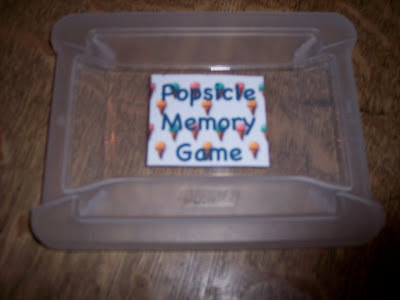 and packaged it in a small plastic latching container from the supermarket or Walmart, I forget which. 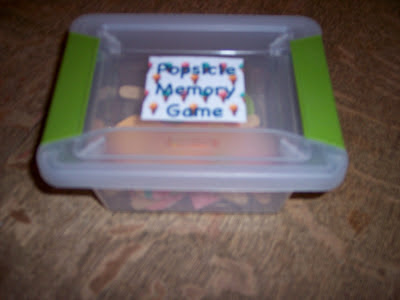 That should make it easy to keep all the popsicles together.


I was actually wondering if the game was a bit too young (the kids turned 5 and 7), but I needn't have worried.  We played the game several times that first night, and even their older brother wanted to get in  on the fun.  They had a great time with it, and they also have some truly mouthwatering popsicles to share with their stuffed animals and friends!