From Mr. T and myself, Thanksgiving wishes go out to all of my readers and friends.  May this be a precious day of counting our blessings.  Whether you're part of a family group sitting around a festive, laden table, or if it's just you at a table for one or two in a restaurant, even if you are sitting in a hospital waiting room -- wherever your circumstances find you today, may you find much to thank God for today and every day.  Truly, His mercies are new every morning, and His faithfulness is great!

On Thanksgiving Day, the dining room assumed an even greater splendor. The table was extended to its full length and spread with a snowy linen cloth. It was set with Gram’s best dishes -- white with a graceful design of trailing green ivy and a crimped "pie crust" rim. The serving dishes were of the same pattern. At each end of the table stood a butter dish and salt and pepper shakers, all of clear glass in a bumpy hobnail design. 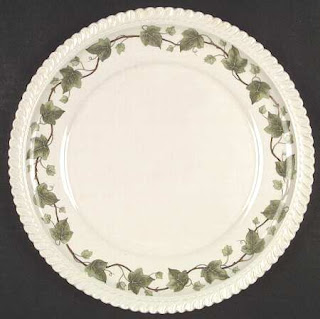 (The above is a bread-and-butter plate like those in my grandmother's set.  It is "Ivy" by Harker Pottery Company.  I inherited my grandmother's dishes, but I have so many dishes already that, much as I loved these, I wanted them to go to someone who would appreciate them more.  I knew that my mother had had it in mind to offer these to a niece [my cousin] and so one day I made a tentative phone call.  My cousin was beyond thrilled to have these dishes and I'm sure she is using them for her family's special dinners.  I had no idea how much she loved the ivy dishes, and I am so happy to have them in good hands.)

Even after consuming all that food, most of us were not uncomfortably full. (My cousin Kevin was the exception. He invariably ended up on the living room couch clutching his stomach.) And, as everyone rallied around to clear the table and help with the dishes, there seemed to be a spirit of family closeness and good will that was rarely felt at any other time. Maybe -- just maybe -- the magic of Thanksgiving at Gram’s worked on grownups just as well as it did on children!

Memories of past Thanksgivings always include thoughts of the days when we hosted Mr. T's large family here, with 20 to 30 people attending.  We borrowed folding chairs and tables from our church and set them up in the living room, and served the food buffet-style in the dining room.  People were quite literally everywhere, and there was so much food that we had to keep the pies on the porch until dessert time.  After the main meal was finished, we packaged up the leftovers, washed the dishes,  and cleared off the table neatly and then, weather permitting, we all took a walk, usually a couple of miles.  (This always reminded Mr. T and his siblings of their childhood Thanksgivings, when they would run laps around the house [outdoors] and jump in the haymow to make room for pie.)

After we got back from our walk, we would reload the table with desserts so people could help themselves.  Someone always brought games along, and some folks would play games while waiting for dessert.  Jenga was always a favorite!  After dessert, usually more games before folks packed up to head home.

Then the real damage control would begin as we cleaned and folded up the tables and chairs, gathered cups from window sills and other horizontal surfaces, and vacuumed the floors, which had taken a beating.  Many years, our own family would then head over to our friends' home for an evening of pie and games.  It was a relaxing time after the busyness of the day!

I could go on and on with nostalgia -- the Thanksgiving break when my daughter's dear friend Emily was with us; the time when we all tramped through our back woods to collect greenery for Christmas wreaths, the year we made the gingerbread house -- but I will stop for now.  Maybe next year!

A hearty breakfast for a snowy morning

Yep, I said snowy.   Thankfully, we didn't get all of the snow that was being predicted, but we got enough.  The above photo is what ... 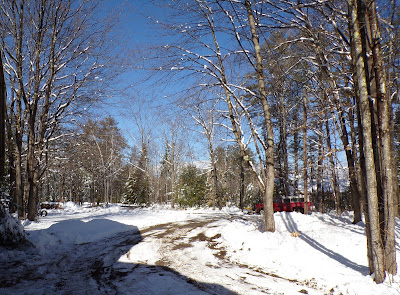