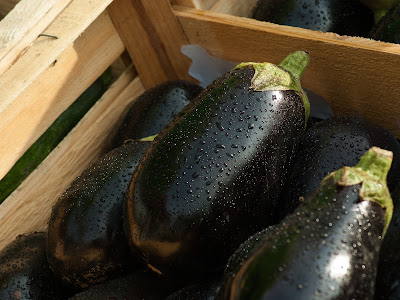 In the "better late than never" category, I am posting this recipe!

Some years ago, I often participated in the Menu Plan Monday linkup at I’m an Organizing Junkie.  Over the years, I've continued to plan menus, but have gotten away from taking the time to link up and post my menus.  Maybe I need to get back to that!

Anyway, back in 2008 I had Meatless Moussaka on my menu plan at some point.  And one of my readers, Kelli, had asked if I could tell her more about that dish.  Yesterday, I was searching for something on my blog and up popped that menu plan, along with Kelli's comment.  You can imagine that my face was red!

I have no idea if Kelli is still interested in this dish, but I will post the recipe now for her and/or anyone else who might be interested.  It's the recipe I go to whenever eggplant is available at a good price.

If you already have a moussaka recipe you like, here's how to make it meatless. Omit the meat, obviously. Then make a mixture of 1 beaten egg, 1 cup cottage cheese, and 2 T. Parmesan cheese. In your 13x9 pan place half the sauce and half the prepared eggplant. Spread all of this cheese mixture over the eggplant. Then on top of cheese mixture, place the remaining prepared eggplant and then the remaining sauce, sprinkling between layers with additional Parmesan cheese. Bake as your recipe directs.

If you do not have a moussaka recipe or just want to try mine, here you go:
*MEATLESS MOUSSAKA
1 large eggplant, pared and cut into 1/2 inch slices (I often cut the eggplant slices in half or quarters, depending on how large they are)
Olive oil for brushing eggplant
Salt and pepper
1 jar spaghetti sauce -- you need about 2 1/3 cups (or, if you prefer to make your own sauce, see below)
1 egg, beaten
1 cup cottage cheese
2 T. Parmesan cheese, plus more for sprinkling

(To make your own sauce, saute' 1 chopped onion and 1 minced clove of garlic in olive oil in a skillet.  When tender, add 2 cups tomato sauce (16 ounces) plus a 6-ounce can of tomato paste.  Add 1/2 tsp. oregano and 1 T. chopped fresh parsley if you have it.  Heat to a simmer, then remove from heat and proceed with moussaka recipe as directed.)

* This recipe makes a 9-inch square baking dish of moussaka.  If you need a larger quantity, just double the recipe and use a 13x9-inch pan.  Enjoy!
Posted by Mrs.T at 12:33 PM