Winter in a jar 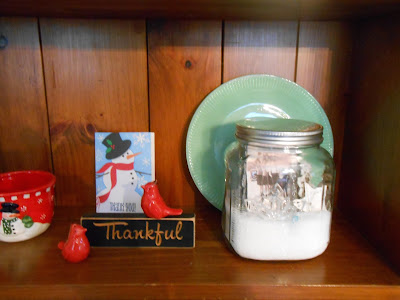 I saw a similar project (a more elegant version) on Pinterest, and knew I wanted to try making one of these.  The one on Pinterest was made in what appeared to be a fancy candy jar, but these pantry-type jars were what I had on hand and fit my style better anyway.  None of my pictures are that great, but I wanted to share this project anyway just for fun.

So I started with a simple jar, bought at Walmart some time ago.  I partially filled it with epsom salts and sprinkled a bit of glitter on top.  I arranged an old photo (vintage winter scene of my mother and three of her siblings), plus various styles and textures of snowflakes.

This is what the photo actually looks like.  I know it's very hard to see what's inside the jar. 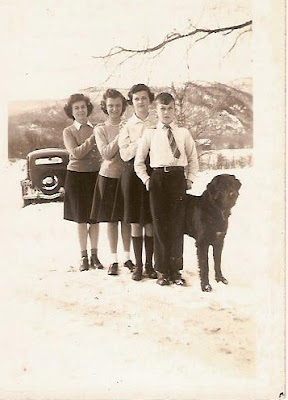 I didn't want to use the actual photo, not knowing for sure what effect the epsom salts might have on it.  I had previously scanned the photo, so I just printed it out on plain card stock.  The first print turned out too big for the jar.  It would fit into the jar, but was out of proportion with the other items.  Just a bit too tall. 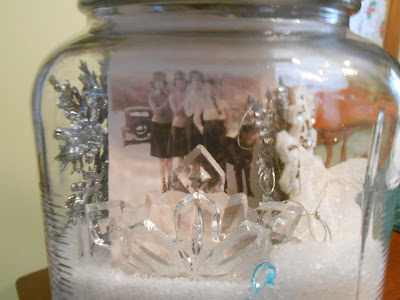 As for other items in the jar, there are a couple of silvery plastic snowflakes, a pretty clear glass snowflake there in the front, bits of a broken blue glass snowflake, a seed-bead-trimmed felt snowflake there to the right of the photo, and a star-shaped Glittery Paper Ornament toward the far right.  My snowflake-shaped ornaments of the same type are already in place on the picture window garland, but I'll show a picture of one below.
There were many places I could have put the jar,  but it just didn't look right on a table.  In order to actually see what's inside, it has to be on a shelf. 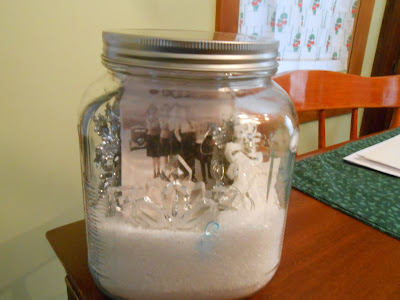 So I did put it on one of the hutch shelves. 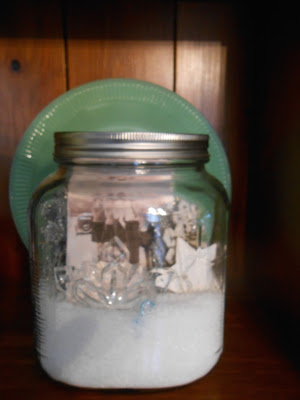 I'm fairly pleased with how it came out.  I think it might be better with a closer-up photo, and I do have others that might work, but I really wanted to use this photo because I just like it. 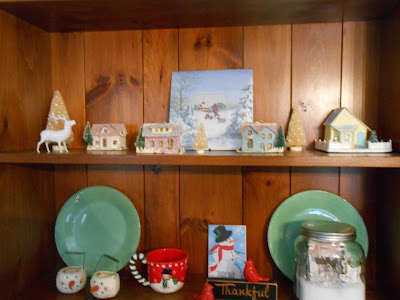 Vintage winter in a jar.

(Sharing today with Vintage Charm and Share Your Cup.)
Posted by Mrs.T at 3:08 PM