I'm thankful to Joyce for finding time, in spite of all her travel this month,  to ask the questions at From This Side of the Pond.  Love the Hodgepodge ... it's a great way to come up with a blog post when one's own ideas are a bit sparse. Here goes:

Or how about this?  "A squirrel around poaching."  For years, we never saw a gray squirrel here on our property, though there are plenty in town.  Last year a huge gray squirrel (about the size of an average cat) appeared.  Now there are at least four.  We keep the sunflower seeds for the birds in one of those large, sturdy containers meant for dog food (I think it's called a vittles vault).  The squirrels have been finding their way onto the porch and, if it is possible to chew the edges of the lid enough to get it off, they will do it.  I finally put a large, heavy wooden object atop the container and that has stopped them for now, but they are well on their way to success.

Where is Skippy the Ninja squirrel when one needs him?  Obviously a fair-weather friend. 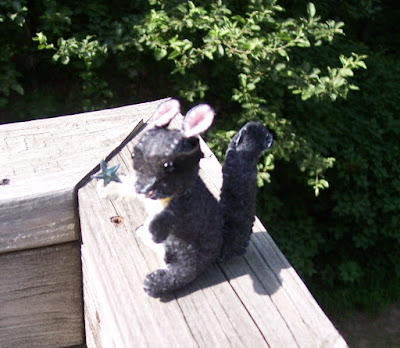 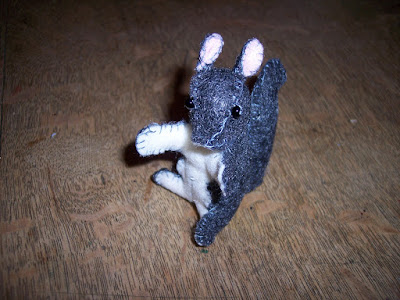 2. Are you the last person to speak up in a group or the first to have an idea?

Sometimes I think I'm the first one to have an idea, but I try not to be the first to speak up.  Not the last, either, though. I might be the second or third person to speak up.  Sometimes, however, I will speak up first (especially if I suspect that no one else will have any ideas).  Now that I think about it, it depends a lot upon the group and the purpose of the discussion.

Why do you suppose that is? Is it a good thing or no?

Not sure.  I suppose it's somewhere in the middle.  I tend not to speak up right away in order to be deferential and give other people a chance.  It's not that I'm afraid they'll think my idea is stupid.

I also have in the back of my mind this verse from Proverbs: "A fool uttereth all his mind, but a wise man keepeth it in until afterwards." (Proverbs 29:11) and this verse, from James: "Wherefore, my beloved brethren, let every man be swift to hear, slow to speak, slow to wrath"  (James 1:19).

3. What do you remember best about being 12?

Being thin!  Or maybe my bright blue bicycle, which I think I acquired that year.

4. January 18th is National Winnie the Pooh Day. Which character do you relate to the most, and why? If you're stumped go here for inspiration.

Probably Eeyore.  "If you ask me, and nobody has ..." .  But I'm not quite as pessimistic as Eeyore.  I think I have some of Rabbit's fussy characteristics as well.  (I did take the quiz Joyce linked to and according to that one, I'm Christopher Robin!)

5. What's an app you use that helps simplify or make life easier for you in some way?

Trying to think if I use any apps.  I don't have a phone, so nothing there.  The apps on my tablet are just fun things like jigsaw puzzles.  Oh, I forgot Pinterest.  That does make my life easier by helping me have a place to stash interesting ideas so I'll be sure to find them when I need them.

6. San Francisco (CA), San Diego (CA), San Juan (PR) San Antonio (TX) Sanibel (FL)...you have an all expenses paid long weekend to one of these destinations. Which one do you choose and why?

I've always wanted to visit Sanibel Island.   But honestly, expenses paid or not, I wouldn't choose to take any long trips just for a long weekend.  Too much work.  A local jaunt, sure, but nowhere that I would have to fly to.  If we're flying, we like to spend a couple of weeks at our destination or its vicinity.

7. Share with us a song that makes you feel nostalgic? For what?

"Silver Bells" always reminds me of my childhood Christmases in the 1950s.

We had several inches of snow overnight and it's still flurrying lightly.   I'm happy I don't have to drive in it unless I choose to, which I don't!