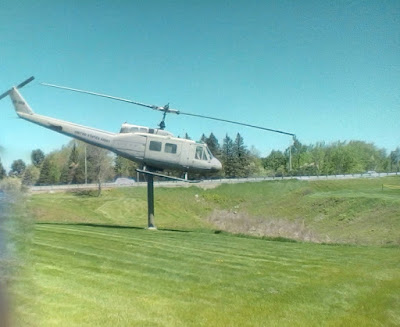 Saturday morning we planned to head home from Bangor, but we ended up visiting a museum instead.  We had had plans to meet up with my blog friend Vee for lunch or pie and coffee, depending on timing, on Saturday en route back to New Hampshire.  However, those plans changed with the unexpected passing of her father, which we learned about while on the road to Maine.  (And I would never have guessed, that day, that just a couple of weeks later, I would be facing the unexpected passing of my father. It certainly helps us to know how to pray for one another.)  I believe, too, that God was already preparing my heart by reminding me that only He knows the day and hour one will pass from this life, and that my dad could go as quickly and unexpectedly as Vee's did.  Neither were in top-notch health.

All that to say that with our plans for Saturday changed, we intended to head home, still having lunch at the place we had planned to meet Vee.  It was interesting how this museum visit came about.  Remember how I said that Comfort Inn had a shuttle that took us to the Loggers' Expo?  Well, as we were traveling across town, we happened to look down off the highway and see the helicopter pictured above.  Of course we were curious.  Wouldn't you be?

We could also glimpse a large building with the title Cole Land Transportation Museum, so we asked the shuttle driver about it.  He told us quite a bit about it (for example, the museum was built around a train and tracks which were put into place, then the building was built around the train).  He added that if we had the time, the cost was minimal and the museum definitely worth a visit.  Well, we had a bit of extra time now, although certainly we were sad about the reason for it.  So we planned a stop at the museum for as soon as they opened on Saturday.

It turned out to be an absolutely amazing place, with loads of local history but also many, many vehicles of all types from many eras.  Everything from Sno-Cats to hearses to tractor-trailer trucks, fire trucks, farm tractors, convertibles, the aforementioned train and even an entire train station, reassembled inside the museum.  We spent well over two hours there and just did not do it justice.  We could easily have spent an entire day!  I will just show you a few of the things we saw. 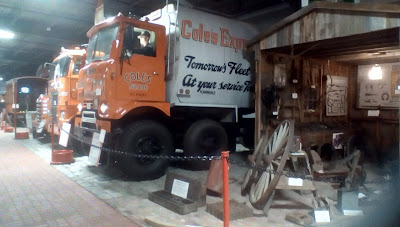 The truck above was a special one called a tank-van.  It featured a box trailer pulled behind the short tanker.  Thus a load of fuel could be delivered to Aroostook County and a load of potatoes could be hauled back in the trailer on the return trip.  Pretty ingenious!
Outdoors there are some war memorials.  The helicopter we saw from the highway was a part of the Vietnam War Memorial.  This is the rest of it -- a wounded soldier being helped to the waiting helicopter.  The woman depicted at right is an Army nurse. 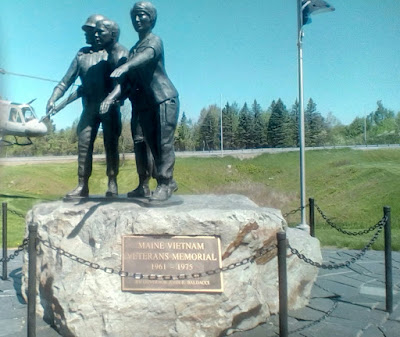 I am not sure which War Memorial the tank belongs to ... it may be the Korean War.  This museum also has a strong emphasis on veterans' programs, and actually pairs veterans with school children to help them gain the wisdom and insight these older people have to share. 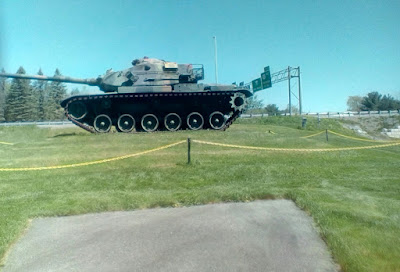 A fascinating, fascinating place.  We will definitely return, hopefully with some of our grandkids who would really enjoy seeing all that this museum has to offer.

On the way home, we did enjoy a delightful late lunch at Cole Farms in Gray.   (The photo below shows our  grandson Darrin enjoying a meal at Cole Farms in 2012.  I think he may have been enjoying the ketchup more than the fries.) 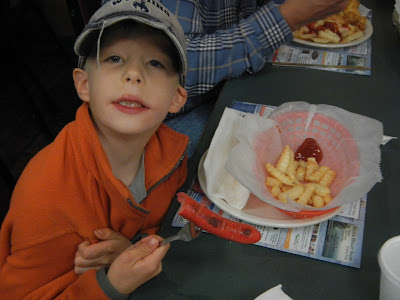 On this trip, we both had delicious chicken salads with cranberries and walnuts.  It made a nice, refreshing stop in the midst of our trip home.  We did miss Vee, but we're going to try that again!