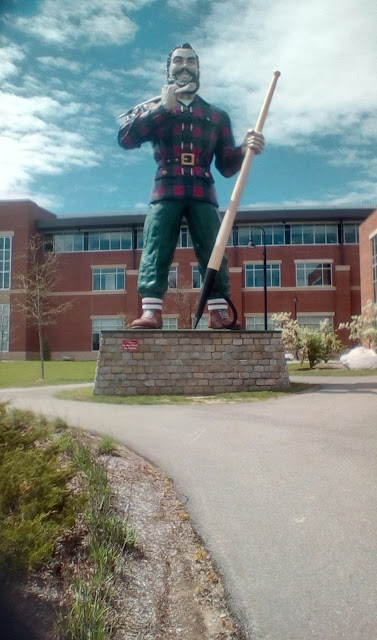 The catchy words and tune from Roger Miller's King of the Road ran through my head as we began our trip North.  Although we have traveled through, or possibly around, Bangor several times on our way to Canada, we have never visited the Queen City of the northeast.  We were headed there a couple of Thursdays ago for a fun trip related to my hubby's work, and were traveling, not by boxcar, but by minivan.  We were going to the Northeastern Forest Products Equipment Exposition, otherwise known as the Loggers' Expo.  The Loggers’ Expo alternates between Bangor, Maine in odd years and Essex Junction, Vermont in even years.  Although Mr. T has visited the expos in Essex Junction several times, he had never been to the one in Bangor.  And this was my very first time at a Loggers' Expo! He wanted me to come along, so he suggested making it a getaway, with two nights in a hotel.

It worked out so well and was a truly refreshing time away.  We arrived at our hotel a little after 7 pm and found that cheese and crackers, milk and cookies were all available for a bedtime snack, so of course we availed ourselves of that.  (We had eaten a very simple picnic supper in the car on the way up.)  We also learned that a complimentary shuttle was available to take us to and from the expo, where the parking was not all that easy.  So we decided to take advantage of that, as well.

After a good night's rest we enjoyed the complimentary breakfast at the hotel.  Comfort Inn has a really nice breakfast with everything one might want, even eggs, ham, sausage, things like that.  Fueled for the morning, we took the shuttle to the Expo, which was being held at the Cross Insurance Center.  Here's a view looking down on some of the indoor exhibits: 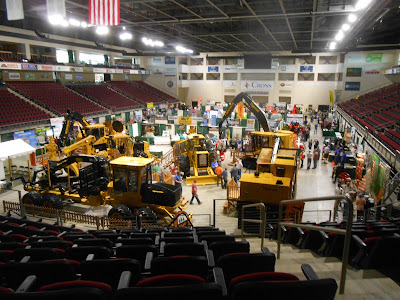 Then we headed outdoors.  I've described the Loader Competition in my Hodgepodge post, so I won't add more info here, but here is my hubby competing: 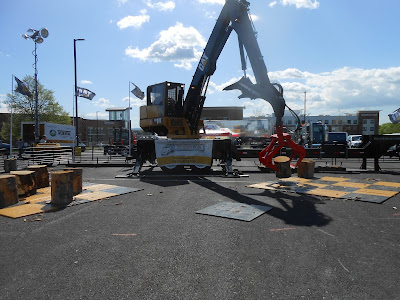 And here are a few other pictures of interest:
And of course, it was necessary to eat!  We shared a baked stuffed potato and also "fully equipped" apple crisp from this vendor.
At this point, we discovered that our camera was no longer usable, as we had recorded videos that took up too much space.  It was the Kindle from here on out, until we could get back home and put the videos on the computer!

So here are just a couple more pictures from the Expo: 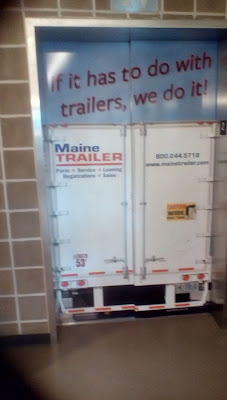 Looks like a trailer stuck in the wall, doesn't it?  Would you believe this is the elevator door in the Cross Insurance Center?  The other one looks much the same.
You can see from the back view of Paul Bunyan that he is wearing a knit cap,  called by many a toque,  pushed to the back of his head.  I did find myself wondering why the statue was there.  Oh, I understand that lumbering was a huge industry that pretty much built Bangor into a city.  But I always thought Paul Bunyan was from Minnesota, not New England.  (Oh, the heresy I was taught!)  So I did a little research.

On the Historical Marker Database, I found this info:  "This statue, reputed to be the largest of Paul Bunyan in the world, stands facing the Penobscot River. The legendary giant woodsman is a symbol of the great era in the late 1800s when Bangor, Maine was acclaimed to be 'The Lumber Capital of the World' with sailing vessels crowding the river and loaded with lumber for shipment to seaports around the world."  Apparently Bangor claims to be the birthplace of Paul Bunyan, too -- a claim it shares with Akeley, Minnesota.  I'll add a bit more about this in my next Bangor post.

Yes, I've decided that in order to get this published, I need to divide it into at least two, maybe 3, posts.  So stay tuned for the rest of our Bangor adventure!
Posted by Mrs.T at 4:49 PM