The Best Breakfast Potatoes ... and a bushel of laughs 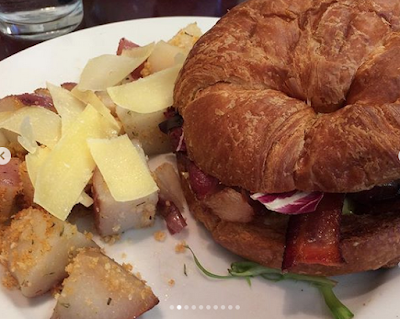 I will get to the recipe (you can see the potatoes at left in the photo above) in a moment, but first, a little background.

During our recent trip to Elko, Nevada to visit family, one of the nicest blessings for me was the very rare opportunity to go out for breakfast with both of my daughters.  I'm so tickled that they thought of doing this.  It was a wonderful time, with conversation and laughter flowing freely. 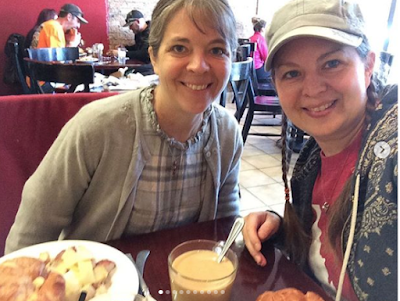 Joanna, who lives in Elko, suggested McAdoo's, and it was a wonderful choice.  We all chose the breakfast croissant sandwich, and it was a fantastic choice, as it was filled with things like egg, bacon, greens, and avocado among others.  We also found that the potatoes that accompanied this sandwich were amazing!

We spent more than a few minutes trying to dissect the recipe -- but we also spent a great many minutes laughing hysterically.  Our server brought Joanna a bottle of ketchup to accompany her potatoes, and the problem started when the ketchup refused to leave the bottle.  (It was a brand new bottle.)  I think many of us have probably had a similar experience with new bottles of ketchup.  Usually a quick jab into the ketchup with a knife breaks the suction or whatever is holding the ketchup back.

By this time, we were all laughing hard.  I wanted so badly to take a video with my Kindle, but two things held me back: I was shaking with laughter so couldn't have held it steady; and also I was pretty sure the knife was going to come out quickly, spattering ketchup everywhere, including my screen.

That didn't happen, however.  At this point, a rugged-looking young man seated near us had grasped the situation, and he signaled to Joanna to let him help.  She handed him the bottle and ... guess what?  He couldn't budge the knife either!  We had to return it to the counter like this:

Fast-forward to last week when we were having guests for brunch and I wanted some sort of easy potato dish to accompany an egg bake.  I was looking through my Gooseberry Patch fall cookbooks.  In Flavors of Fall, I came upon a recipe called Golden Parmesan Potatoes and decided to try it.  I had to adapt it a bit anyway to meet a dietary need, but that adaptation turned out to be just the ticket to potatoes that tasted very much like those we had at McAdoo's.  (I also cut the recipe in half to make a smaller amount, so that is how I will write it.  If you need a larger quantity, just double the recipe and use a 13 x 9-inch pan.)

I made these again for a supper guest the same night.  Absolutely delicious and so easy!

Combine the cheese, crumbs, salt and pepper in a gallon size zip-top plastic bag.  As you prepare the potatoes, put the cubes right into the bag of crumbs.  When all the potatoes are in the bag, seal it and shake very well to coat the potato cubes with the crumb mixture.

Coat the bottom of a 9-inch square pan (I recommend non-stick metal) with either butter or olive oil.  Add potatoes and any remaining crumbs.

We loved this and I hope that you will, too!  No ketchup required.
Posted by Mrs.T at 11:41 AM