Our trip to the Great North Woods, part 3 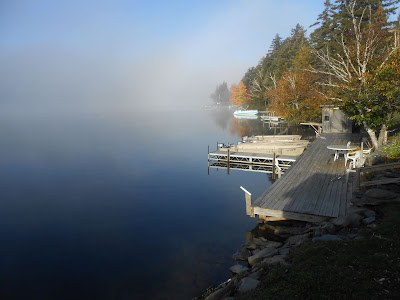 Monday was a full day with lots of activity, so I am going to give that day its own post.  Above you see what we saw when we looked out the kitchen window on Monday morning.   Lots of mist over the lake.  Mr. T had planned for this to be his hiking day, so he was hoping for a nice sunny morning with good visibility.  He ended up with just that!
When we had checked out the trail to Magalloway Mountain on Saturday, we found one had to drive a long distance on dirt roads to get to the trailhead.  I found it rather nerve-wracking.  So he couldn't resist taking a picture of himself navigating this leafy tunnel on Monday morning. 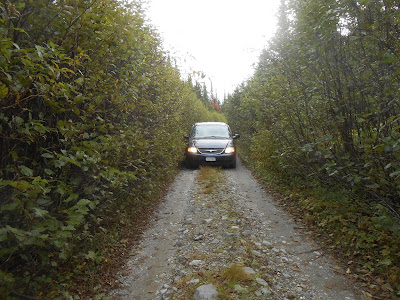 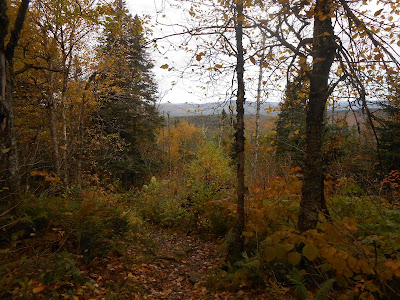 A scene from the trail. 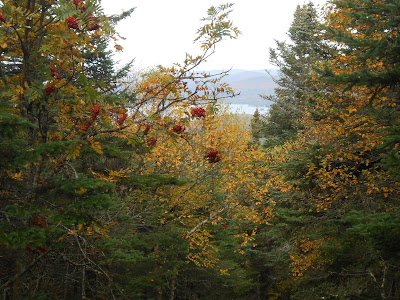 More mountain ash berries.  So pretty against these yellow leaves, with lake and mountains in the distance. 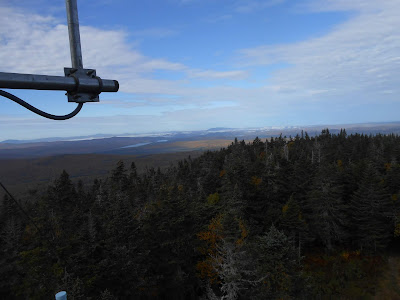 There's a fire tower on Magalloway Mountain.  These photos were taken from there. 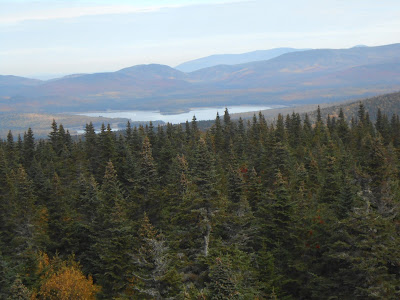 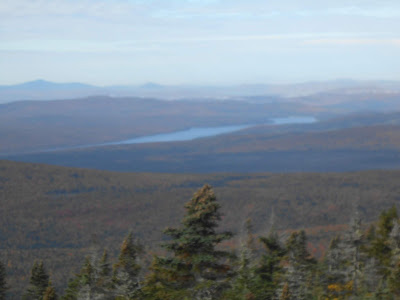 From Magalloway one can see into not only New Hampshire, but Maine, Vermont, and Canada. 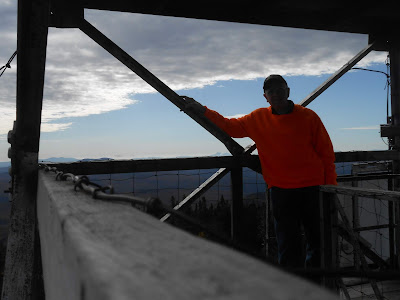 On the fire tower!

Interestingly, when he left the cabin Mr. T reminded me that he would not be able to call and assure me of his safe arrival at the summit, since there is no cell service at the cabin.

Imagine my surprise, then, when I received an email from my daughter with this in the subject line:

I was in shock for a minute.  How did she know where he was?

But she went on:

He found that he had cell service at the summit, so thought of calling our daughter and asking her to email me.  Aah, technology.  It can be wonderful! 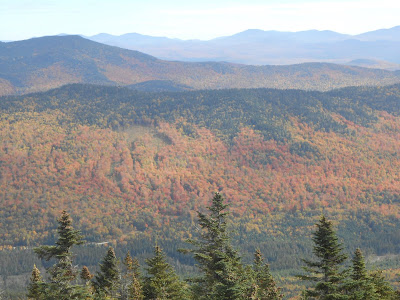 Upon his return from this adventure, Mr. T. suggested a lunch picnic at First Connecticut Lake.  He had been traveling by the picnic area and noticed many nice picnic tables by the water. 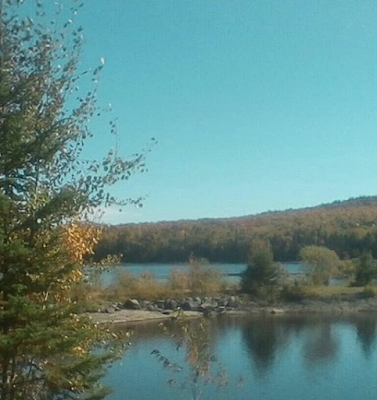 Isn't it a pretty area? 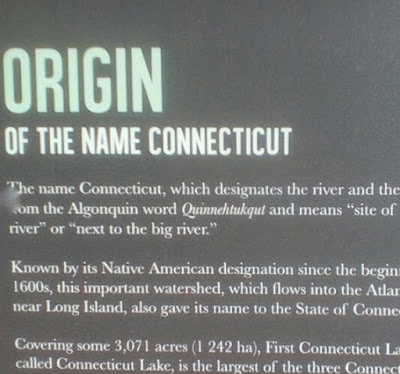 This is an excerpt from what's on the sign above.   I never knew the origin of the name  Connecticut! 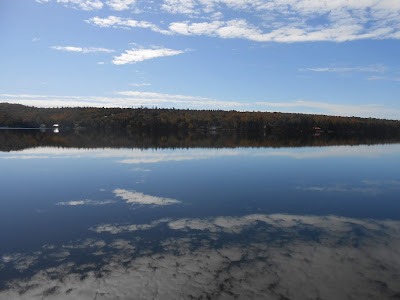 When we got back to the cabin, Mr. T took the kayak out again for a bit.  These cloud reflections are pretty amazing, don't you think? 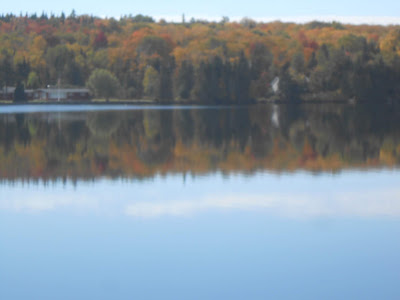 Another shot of that elusive scene across the way on Back Lake.

Before leaving for our picnic, I had put supper in the crockpot.  We had invited dear friends who live in the area over for supper at the cabin, and I wanted a simple meal with as little fuss as possible.  I decided to serve soup and bread.

Here is my recipe for

6 cups chicken broth
12 to 15 1/2-ounce frozen meatballs (or 6 to 8 1-oz. ones)
1 small boneless skinless chicken breast (may be frozen)
Sliced celery to taste (I usually use a cup or two)
Cut-up carrots to taste (I usually use baby carrots and quarter them -- again, about a cup or two)
Spinach to taste, stems removed (can use up to a bunch of spinach -- I have used part of a bag of baby spinach leaves or of frozen cut leaf spinach)
Garlic powder to taste
Lemon pepper to taste
1/4 cup tiny pasta, like alphabets or orzo -- or you can use rice (any of these will be added during last hour of cooking)

Parmesan or Romano cheese to taste

Put the meatballs on a microwave safe plate and defrost them for a minute or two, so you can quarter them. If using the larger (1 oz.) meatballs, cut them in eighths.

Put in crock pot along with broth, chicken, vegetables and seasonings.  Cook all day on low or 3 hours on high.

Add pasta during the last hour of cooking. (In the case of alphabets, I have added them just before serving and they cook just fine.)

Before serving, remove the chicken breast and cut it or shred it in small pieces. Return chicken to the soup.

Serve with Parmesan or Romano cheese for people to add to taste.

(I had planned on using rice in the soup this time, but forgot to bring any.  So I stole a quarter cup or so of elbow macaroni out of a box of Annie's mac'n'cheese.  I also used precooked chicken and a box of spinach which I brought from my freezer at home.)

With this, I served some multigrain ciabatta rolls (from the Walmart bakery).  These rolls are square and already sliced in half horizontally.  I sliced them in half vertically as well so they would be easy to eat (almost like breadsticks).  The packaging suggested heating them in a hot oven for a few minutes.  I did, and served them with butter.  They were very good.

Our friends brought dessert -- a sumptuous apple cake with a cream cheese frosting.  There was a hint of maple in the frosting and it was so delicious!  We accompanied the dessert with mugs of hot tea in fall flavors.

We enjoyed a great time of fellowship and a wonderful meal together.  God is so good to give us Christian friendship and fellowship! 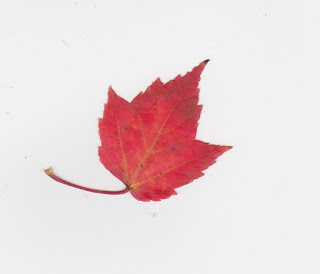 And that was Monday of our getaway.  It had been a full but most enjoyable day in the Great North Woods!
Posted by Mrs.T at 11:14 AM