A company meal at our little camp 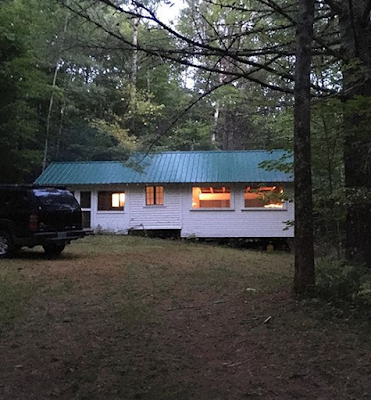 Yes, we got things in good enough shape at our little camp to invite supper guests!  I thought it would be good to write a post about it, so we can remember what we did to make things work.  I love the welcoming look of lights spilling from the windows!

As regular readers know, we have been working on this renovation for several months.  I will write a detailed post about that, probably when we finish.  We began by using the shop vac (via generator) to remove a lot of dust, dead insects, and grime in the three rooms.  Then we painted the walls and ceilings in the two smaller rooms.  Our daughter and kids (see the kids below) painted the kitchen cabinets, and their family put down new flooring in those two rooms, actually as a Father's Day surprise for my hubby.  This was all done with the help of a generator.  Finally, a few weeks ago, the power got hooked up.  So thankful! 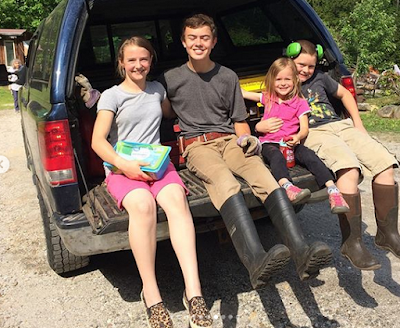 Interestingly, and thankfully, the vintage fridge that is there still works.  It actually freezes ice cubes!  There is still no water, no kitchen stove, and no plumbing, but we pulled off a hot dog roast and potluck meal with our daughter, her hubby, and family, who live next door.  We had invited another family but they were unable to join us that night.  There will be a next time, however!

I brought along paper plates, paper napkins, plastic cups and plastic "silverware".  We planned a very simple menu of hot dogs, baked beans, salads, chips, and desserts, plus iced tea and bottled water.  Since the fridge works, we could keep the salads and drinks in there.  I brought the baked beans in a crockpot, and of course the hot dogs were cooked over the fire. 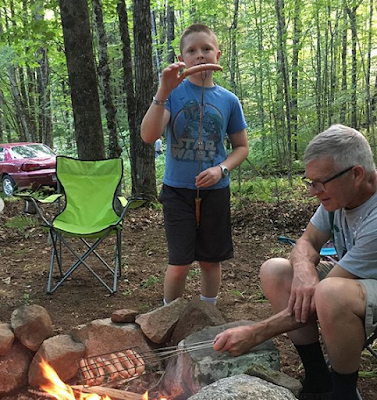 When they were cooked, we piled them on a plate,  with hot dog buns on a second plate, and condiments at the ready, and put them on the kitchen counter "buffet" along with the salads, chips and baked beans.  I love the arch doorway into the kitchen!  Sam and Julia are filling their plates, below. 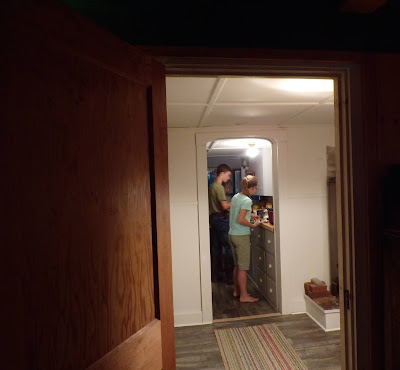 For dessert, Carrie brought brownies she had made and a small cheesecake someone had given them.  I made Blueberry Lemon Zucchini Cake which turned out to be amazing!

There's lots of work still to do in the living room/dining area.  My dad had begun paneling it with pine, but never finished.  Mr. T will finish the job, but for now don't look too closely at the corners.  We recently rearranged the room.  We've taken out many old musty items and replaced them with things from our house or the homestead.  You can see below that the paneling is not in place on most of the walls, just the studs. 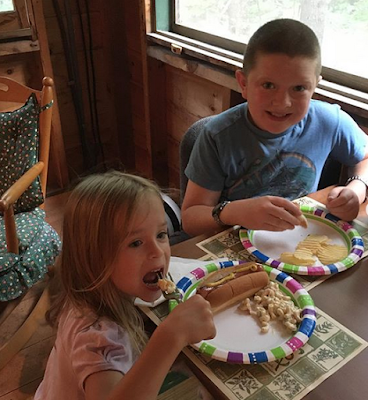 Arielle and Josiah enjoying their supper.  Those are nifty vintage paper placemats under their plates.  Such wonders used to come in packs of 100.  I wonder if they can be found anymore.  So thankful I kept these! 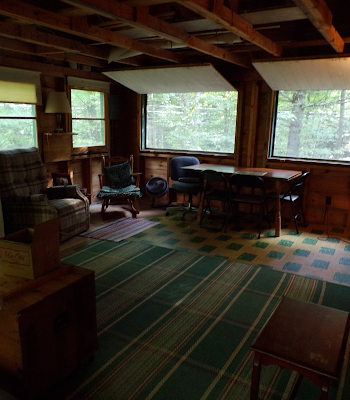 When I was growing up, we always had the table over on the side under two of the big windows, as it is here.  During the whole time we've been renovating, the table (a different one than in my childhood) has been in the center of the room.  I really wanted to at least try putting it by the windows, and wow! What a difference it made.  It really makes the room seem much larger. 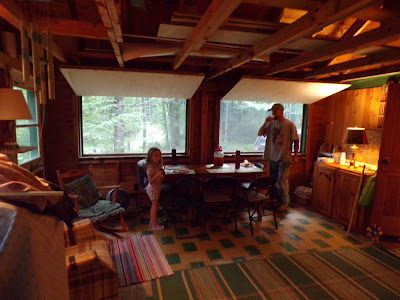 The photos below show some of the living room side of things. 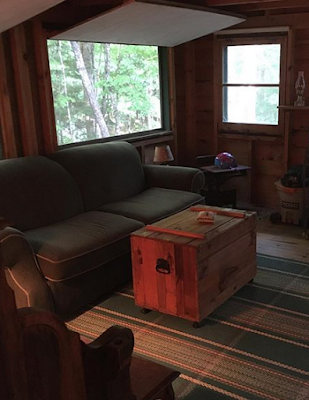 The kids ate at the table and adults sat wherever they chose.  Jim and Carrie chose the couch, although they are not visible in the photo below. 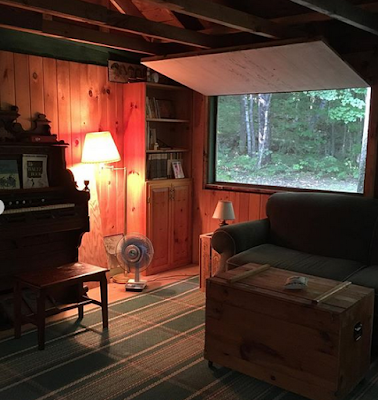 The photo above shows the pine paneling on one wall and part of another.  That bookcase, as I mentioned in a different post, was one Mr. T had made for my sister's apartment.  Since she has passed away, the bookcase was at my parents' house and we thought it would look nice here.

After supper, we put all of the paper dishes, etc. in a trash bag which we took home with us.  I didn't want to leave anything in the camp to attract mice or chipmunks.

We all sat around the campfire for awhile after supper, enjoying the new fire pit and celebrating with some extra large sparklers we had found at the house. 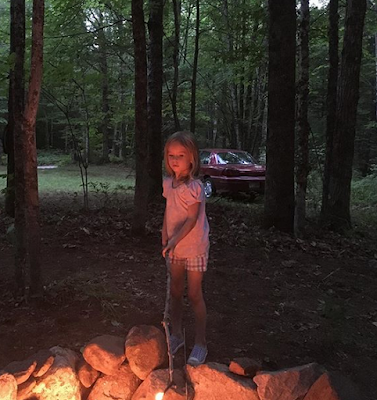 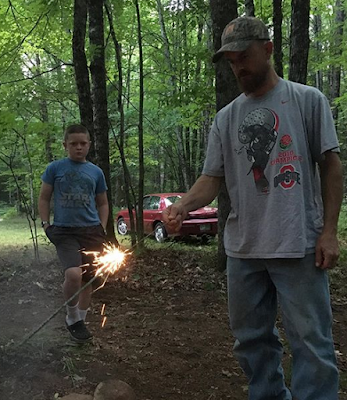 What a wonderful evening it had been, as our daughter put it, making fun new memories in this special old place!
Posted by Mrs.T at 6:06 PM