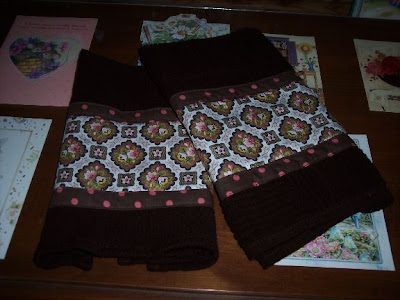 Here are my most recent embellished dish towels. I like the combination of pink and brown, but hadn't planned on actually making any dish towels in this color combination. Here's how it happened:

While sorting through a craft materials tote, I found 2 chocolate-brown dish towels. They'd been there for many years while I waited to think of a way to use them. I bought them as part of a set of 3 (at a dollar store!) years ago. The third towel of the set had been a brown and cream linen type towel with coffee pots on it, and I gave it away as part of a gift a long time ago. So, here were these 2 kitchen towels, and it stood to reason I would trim them with fabric, since that was my current favorite way to embellish dish towels. But what fabric? Did I have anything in my stash that would go with this deep brown? I didn't think so. However...

In sorting through fabric scraps, I came upon a piece of vintage chintz (still glazed and shiny! It had never been washed) in a print that featured brown and pink! So that would be my main trim fabric. A few days later in a Walmart in another town, I spotted a remnant for 60¢. It was brown with pink polka dots... perfect for the narrow trim with the chintz.

Last week, I finally put the two together. I discovered that there was enough chintz to do one more pink and brown trimmed towel. 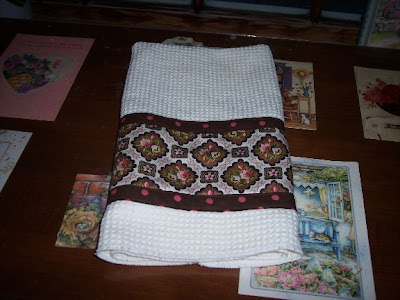 So, I used one of the microfiber towels I stocked up on awhile ago (on clearance at Walmart) and trimmed it to match.

Here is the set of three. 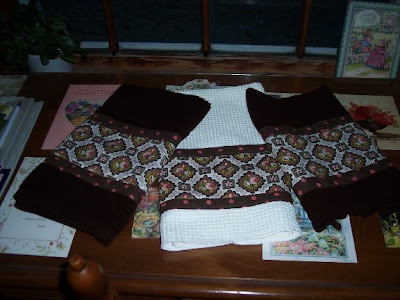 Aren't they pretty? Now, if I only knew someone with a pink and brown kitchen!
Posted by Mrs.T at 4:17 PM