Last week was my dad's 87th birthday. Rather than attempt any kind of a party, we took him out for a late lunch at his favorite seafood place. I wanted to make him a birthday cake, but knew that realistically he wouldn't be able to eat an entire cake.

Every year since I can remember, his traditional birthday cake has always been tomato soup cake with a vanilla butter frosting. When my mother was still able to bake, I didn't think much about what recipe she used. I thought it had been the one in a little community cake cookbook. And so, when I started making his cake, I sort of shuffled between that recipe and ones found on the internet, etc. Some years, a friend or granddaughter has made his cake.

This year I looked at the cake cookbook but the recipe just didn't seem right. Finally I decided to look in my old recipe box, which contains a lot of recipes I had copied before leaving home. Sure enough, way at the back of the cake section was the batter-spattered recipe for tomato soup cake: And here's the back of the recipe: 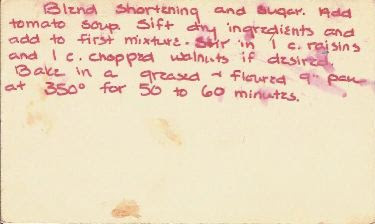 I decided to make cupcakes, so that I could take him only a few on a plate, and also because the weather was so hot and cupcakes would take less time in the oven. The recipe would have fit into 12 cupcake tins, but I only used 11. I was referring to some old directions for baking cupcakes from cake recipes, and they said to make 10 or 11 cupcakes for a 9-inch pan's worth of batter. Next time I will make a dozen, as some of these overflowed their tops.

The cupcakes were really too soft and crumbly, I think because I followed the "cake flour substitute" formula which involves subtracting 2 Tblsp. flour from every cup of all-purpose flour. I also spooned the flour into the measuring cup, something I know one is supposed to do, but I usually just scoop the flour (except in yeast bread recipes) and it works out better for me. So next time I will scoop the flour and use the full 2 cups.

I frosted them with a vanilla butter frosting. Most people use a cream cheese frosting for tomato soup cake, but my mother always used just a basic butter frosting and my dad prefers that. The day was so warm that the frosting threatened to slide off. As soon as I added some candy sprinkles, I put the cupcakes in the fridge. That also helped with their soft crumbly texture. 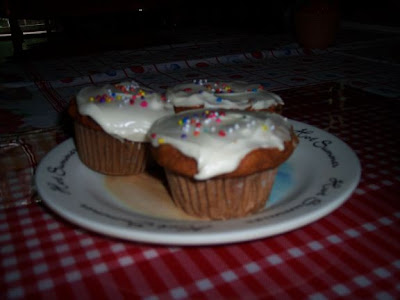 My dad enjoyed his birthday cupcakes, and Mr. T took full advantage of the leftovers!
Posted by Mrs.T at 12:45 PM