Here is the most recent sewed swiffer cover I have made. I thought I would make two of each kind (crocheted, for dry mopping, and sewed, for wet mopping). I like the idea of having two so there is always a clean one ready when I need to mop. These are made using thin terry kitchen towels from Walmart.

This is the pattern I used:
Swiffer Cover. The pattern calls for terrycloth, but I decided to try using a kitchen towel instead and it worked very well. The first one I made had a coffee motif on the towel and the colors went really well with the swiffer. This one, as you see, has a grape and vineyard motif. It doesn't go quite as well color-wise, but is still attractive. On this one I used large vintage buttons in a wine color.


Here it is in place on the swiffer, button side up. 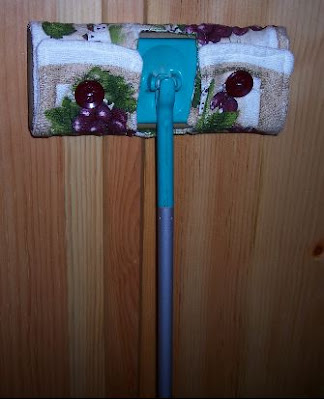 And here again, only now you can see the side that will be in contact with the floor when mopping. 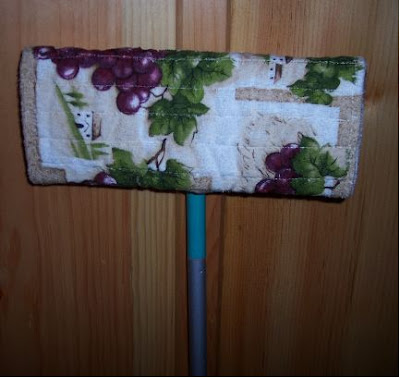 I have used this and the only problem I see is that one really needs to wring it out before mopping rather than just dipping it in a bucket of cleaning solution and mopping away.  But that is easily done and not a huge problem.  Other than that I was very pleased with how it worked, and especially pleased with the $1 price tag!  I could have avoided even spending that by utilizing a used terry dish towel, but I thought the thinner, stiffer cheap ones would work better for this purpose -- wouldn't slide around so much.  That turned out to be true.

It makes mopping more fun to use something so decorative, and one gets to be frugal at the same time. It's a win-win!
Posted by Mrs.T at 1:15 PM