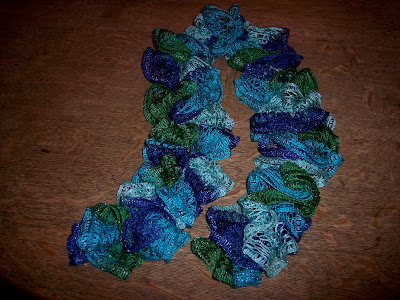 I promised that I would take a few posts and share links, instructions and so on for the recent simple crafts I showed yesterday.  Since a couple of people had asked me about the scarves, I thought I would share the info about them first.

I actually had no intention of making a scarf like this.  I had seen people wearing them but had assumed the scarves were purchased.  Even had I known they were handmade, I would have thought them beyond my abilities.   When I came upon a tutorial for these, I had actually been searching for a different style of scarf which uses an entirely different type of yarn.  But I saw these and was intrigued, plus my local Walmart carries Sashay yarn, so I decided to give it a try.

The scarves I made are crocheted, but there are tutorials for knitting them as well, and I have even seen one tutorial for sort of finger-crocheting these.  That one showed scarves made by a ten-year-old girl, and they were beautiful.  But I'm a little intimidated about trying that method.  A hook seems easier somehow.

Here is the tutorial I used: New and improved Sashay scarf pattern.  There is a similar pattern on the
Red Heart web site -- that is, it produces a similar looking scarf, but the two patterns are quite different.  The one on Red Heart is called Frilly Crochet Scarf and it downloads easily as a PDF.  I encourage you to take a look at the Red Heart site because their pattern offers a link to a YouTube video on crocheting with Sashay yarn, which I found really helpful.  I had to watch it a few times before I got the technique down, and I still don't think I have it down perfectly, but fortunately the ruffly nature of this scarf hides any mistakes quite nicely.

One more note -- the pattern I used suggests winding the Sashay yarn onto something like a toilet paper tube before beginning to make the crocheting go faster.  I did do this for the first two scarves, but didn't take time on the third one, and I really couldn't see that it made a whole lot of difference.  But the lady who wrote the pattern makes the scarves by the dozens, so she ought to know.  So do whatever you think best!