Well, I certainly haven't posted as much as I intended to in April.  I decided I'd better put up a short, random post so everyone will know I'm still here!  Just busy ...

We are planning a trip to NV this spring to see family and I have a certain number of things that I want to accomplish before that takes place.  Spring decorating, for one.  I have put up my Easter ribbon board 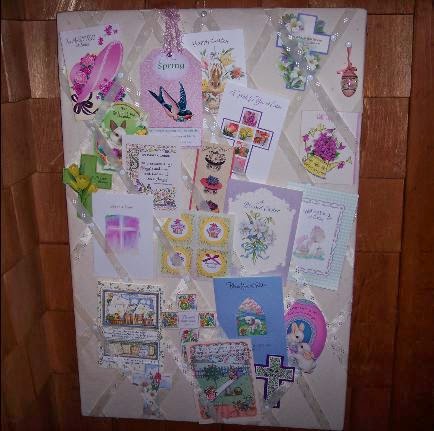 and taken down the St. Patrick's things (of which I have only a few).  The maple sugaring items are still in place because that is still ongoing here.  It's been a very odd sugaring season, the sugar
makers say.
Yesterday was cool and rainy.
Not a very nice day, but the rain has brought the snowbanks down some more (and increased the mud, but oh well) so I'm happy about that.

I also have some handmade birthday gifts to finish.  Sadly, three spring birthdays will take place while we are away.  I want to get those gifts finished before we go.

Just finished up a set of four embroidered flour sack towels with simple fabric trim as a birthday gift.  I used one of the "Aunt Martha" transfer sets -- this one titled "Java Break" and including designs featuring all things coffee.  I hope to post pictures soon.

Another project I'm working on is homemade natural sachets to use in vacuum cleaner bags.  Don't you love it when you can make things like this yourself?  I do.  I put together the mixture (which includes rosemary, lavender, cedar, cloves and baking soda) yesterday and it is currently residing in a sealed jar for a week.  Then I'll package it up in coffee filters and tie with string to make the sachets.  They stay in the sealed jar until they are all used up, to keep the fragrance fresh.  I made a batch of these previously and the last sachet is in the vacuum cleaner bag right now.  This time I decided to make a double batch.  The fragrance is fresh and natural and it works really well, especially in our older, somewhat stinky vacuum cleaner.

The homemade Tub and Shower Magic -- using the two simple ingredients of Dawn® dish soap and warmed white vinegar -- is another of my favorite household helpers. 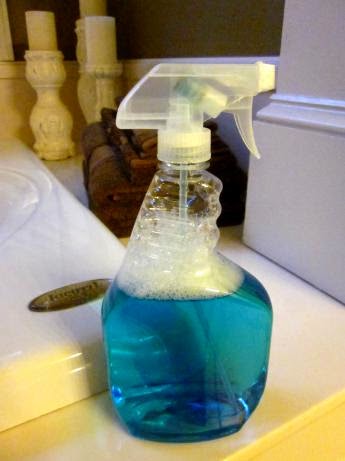 Now that I've tried it, I mix up a new batch whenever it runs low, and keep a spray bottle of it in each bathroom.

Our local supermarket has shank portion hams for 79¢ a pound this week.  A great deal!  For years, when I bought an Easter ham, I would splurge on a spiral cut one.  (And I didn't buy hams -- or any other type of roast -- for many years before that because, even though the price per pound was cheap, I just couldn't spend that amount of money on a hunk of meat.)   But it seemed that no matter how I cooked it, it was not as juicy and flavorful as I like a ham to be.  Then one Sunday our pastor's wife brought one of the shank portion type to the potluck.  I couldn't believe how tasty it was and asked her about it.  After that, we started buying a shank portion whenever they went on sale for 99¢.  We eat it as baked ham the first day, then use it in sandwiches, casseroles, egg dishes and the like before turning it into soup.  Pea soup is traditional in New England, and sometimes I make that, but this Ham & Bean Chowder is the best of the best in our book.
Last night I made some of these gluten free Brazilian Cheese Buns to accompany clam chowder.  I know I've shared the recipe before, but these are good and so different.  They use tapioca starch as the main ingredient.
Yesterday I baked another loaf of gluten free sandwich bread from
The Baking Beauties .  If you have never visited Jeanine's site and you need to bake gluten free for any reason, check it out.  The sandwich bread is the best of its kind I've ever tasted and is easy to make.  She has all manner of other recipes too and I have been thrilled with every recipe I've tried from her site.  I'll probably be baking her Best Gluten Free Cinnamon Rolls  for the Easter breakfast at church again this year.  They were fantastic!
I've been doing the "Why Easter Matters" Bible study from Good Morning Girls and am in the middle of the second week.  If you'd like to get in on this, it's really not too late.  You will just finish a couple of weeks later.  To get started, you need to go to the Good Morning Girls site to sign up for their emails.  Then, at the bottom of the first email, you can find the links to download the reading guide and the study guide.  I've been so pleased with this study.  It is helping me to focus so much more than ever before on the real meaning of Easter.  I'm sure others would be encouraged as well.  I'm basically just meditating on the passages suggested using the SOAP method.  It's great.

I've also been working away on a writing project -- a simple re-write of one of my older summer devotionals for kids.  This one -- Riding a Mountain Railway -- has, as you might guess, a railroad theme.  I hope to finish it this week.

Okay, enough meandering!  I'm off to work on some of these projects!