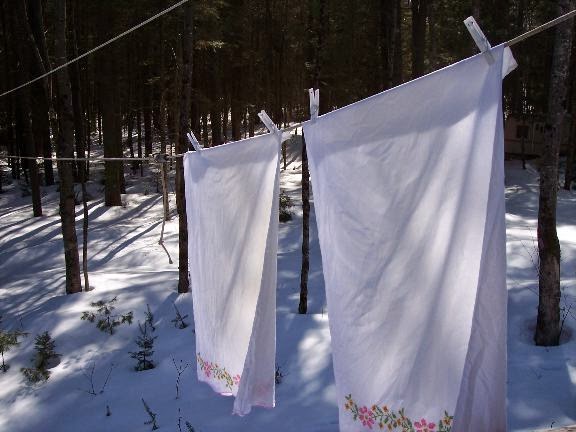 It's hard, though!   Between last night and this morning we ended up with three to four inches of wet, sticky snow.  The photo above is from a March of a previous year, but it gives you an idea of how things look.  A few days ago, the tops of stones in our stone wall were visible out back.  No more!

It's supposed to rain tomorrow, quite heavily at times, so that should help all of our snow to dissipate fairly quickly, but still -- it feels like taking one step forward and two steps backward. As we drove home from church last evening, the snow had already begun to fall thickly.  Thinking of how things were likely to look in the morning, I was reminded of these lines from Robert Frost:

"The sun was warm but the wind was chill.
You know how it is with an April day
When the sun is out and the wind is still,
You're one month on in the middle of May.
But if you so much as dare to speak,
A cloud comes over the sunlit arch,
A wind comes off a frozen peak,
And you're two months back in the middle of March."
-- Robert Frost, Two Tramps in Mud Time

Robert Frost, by the way, lived in New England and knew well what was meant by "Mud Time."

In an effort to help myself continue to think spring,   I am posting pictures of a couple of spring banners I made for my daughter's birthday.  I think I'm going to make some for myself as well.
The floral alphabet squares were a freebie from The Cottage Market.   The sheet music was from an antique piano lesson book (think kids taking lessons in 1924, 1935, and so on) that someone had given us.  The book is missing both covers and falling apart, so this is a great use for it.  I sewed vintage lace across the tops to hold the banner together and serve as a hanger.
These banners were printed out as is from The Cottage Market.  You can choose to print out whatever letters of the alphabet you want, and these banners also come in a  pastel color scheme.  Both of these banners can be found in The Cottage Market Freebies section.  You will find tons of inspiring printables and other goodies there, so check it out if you've never visited.

I printed the polka dot letters out on card stock, then just simply cut them out, leaving about half an inch at the top of each banner.  I folded over the half-inch tops thus formed and stapled them over some yellow/white baker's twine.

All of you who are already experiencing spring, be thankful!  It looks as if it may still be awhile up here, so the rest of you might consider making a few spring banners...