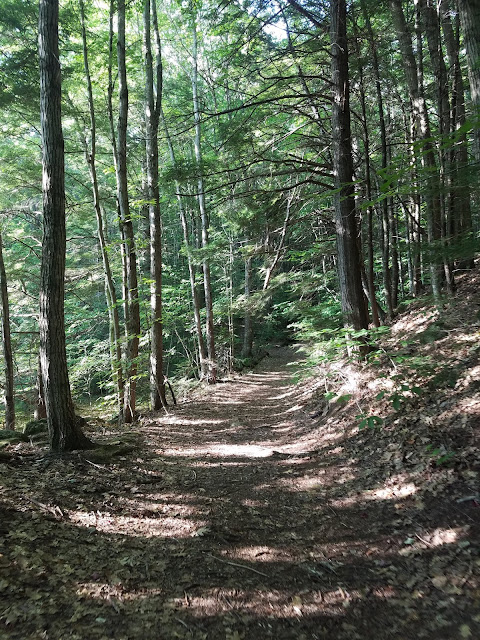 The weekend of July 13-14 was a busy, but wonderful whirlwind.  I alluded to it a bit in my Hodgepodge post,  but wanted to expand on it somewhat so I don't forget the details.

Mr. T and I were invited to attend a wedding in Maine on the Saturday, on behalf of our daughter and son-in-law who live in Nevada.  It was their former pastor's son who was getting married, and the whole church from Elko was invited provided they could get to Maine.  Our daughter asked if we could attend in their place, and the answer was a gracious yes.

When she broached the idea to me, our daughter also suggested, "I know it's a ways up in Maine, so I thought you and Dad might turn your trip north into a getaway."  Of course she had barely suggested the idea when we began to run with it.  We love getaways!

(This makes it sound as if we are taking getaways very frequently indeed.  Not really ... the last one -- to Stowe, Vermont -- was in May!  And these are overnight getaways, just long enough to get a bit refreshed.)

So we headed out early Friday afternoon, knowing it would take us at least 5 hours to get to Brewer, where we had a room reservation here:

It was a little amusing that my hubby had two work-related phone calls (which he had to pull over for), before we even left New Hampshire!  We made a quick stop at a post office to mail some things along the way, but otherwise did not stop until we reached Cornish, Maine and a favorite road trip break:
Sadly, they were out of donuts, but we made do with a box of Munchkins: 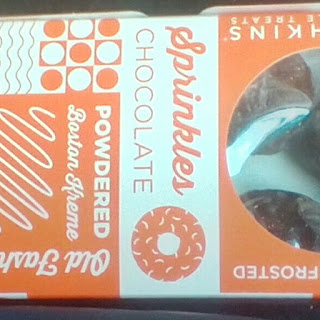 From there, we headed north and arrived at our hotel a few minutes after 6 pm. 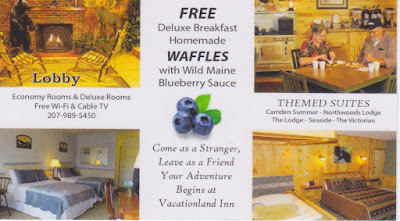 We were in the Maine Coast building.  I failed to get photos of our room, but it had a nice coastal decor.   After settling in a bit our first order of business was to find some supper.

We ended up having fish and chips at a nearby restaurant.  Although not as scrumptious as the fish we would enjoy the next day, it was good, and the price and location (walking distance!) were right. 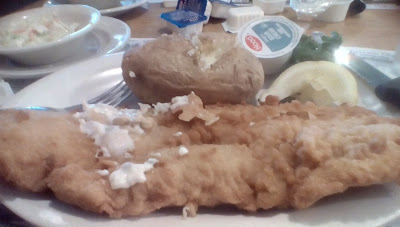 After a wonderful night's rest we ventured to the Breakfast Room at the Inn for a nice continental breakfast, made even nicer by the homemade waffles with Maine wild blueberry sauce.  Using pre-measured portions of homemade batter, diners bake their own waffles in one of three waffle irons, which are kept constantly busy.  Bowls of blueberry and strawberry sauce await, along with syrup dispensers.

If you look at the small photo to the right of "Free Deluxe Breakfast" on the business card above, that is one area of the breakfast room.  One really neat feature of that room is the old cookstove (not in use as a stove) just to the left of the woman in the photo.  We sat in the second area.
Returning to our room, we took good time over our Bible reading and prayer before checking out and heading for our wedding destination.  I will share just a few general photos from the wedding.  I did not try to get photos of people or of the ceremony.  These were taken with my Kindle, so are not the very best quality.

The front of the sanctuary before anyone came in.  I love the lights draped inside the swags of tulle. 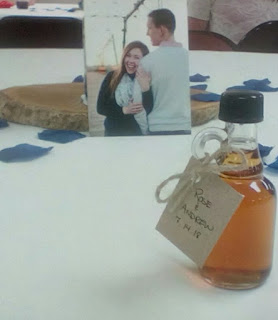 A glimpse of the table centerpieces and the favors -- tiny jugs of maple syrup! 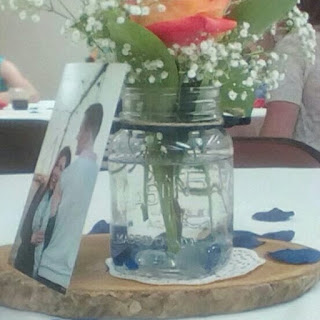 The centerpieces were so simple but so pretty -- just slices of wood with a paper doily and mason jar atop each one.  Jars were filled with roses and baby's breath, then an engagement photo was propped against each one.  A few dark blue silk rose petals were scattered about.  (Wedding colors were orange and navy.)

I loved how they combined these gorgeous colored roses with the rustic look of old wood.  Touches of both were everywhere throughout the decorating.

After saying our goodbyes to the bride and groom and our friends (the groom's parents and grandparents), we headed south on I-95 en route to a meet-up with my blog friend Vee.  We were a tad early, which was a good thing,  because we drove right by the rendezvous at the first pass.

We had made arrangements to meet at one of Vee's favorite places and we very much enjoyed the delicious seafood and the wonderful fellowship.   We are kindred spirits in many ways and it truly was just like meeting up with an old friend.  Vee is warm and genuine, a delight to spend time with.

(The mosquitoes drove us off the deck -- which had a water view and would certainly have been a delightful place to eat on a sunnier day -- and inside, which could have been far more delightful without a particular inebriated patron.  But no matter.  Food and fellowship still wonderful.)

Vee had also told us about an ice cream place not far away ... so we all drove there for dessert.  It has mini golf and a driving range with a view of Mt. Washington.  And delicious ice cream.  The veranda had plenty of seating and no mosquitoes, so we continued to chat as we enjoyed dessert -- Campfire S'mores ice cream for Mr. T and myself (it's our new favorite) and Maine Deer Tracks for Vee.
Curious about the flavors?  Campfire S'mores is described as graham ice cream oozing with marshmallow ripple and crunchy chocolate chips. Maine Deer Tracks is described as "rich espresso ice cream with crunchy toffee pieces and tracks of thick chocolate fudge."  Now I wish I'd had that one!

To learn more about the flavors of Gifford's Ice Cream, go here: Gifford’s Ice Cream and click on "Flavors".  Although Gifford's is a Maine company, several of our favorite ice cream places in New Hampshire serve their ice cream. 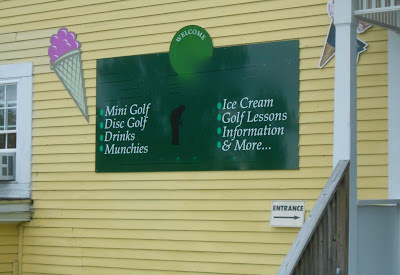 Before leaving the grounds, we brought out the gifts we had for one another and opened them at a nearby picnic table. Vee was far too generous ... besides the squash referenced in a previous post, there were books, including one from her beloved John's library.  What a treasure!

Another book was a recipe binder, to write my own recipes in.   I'm planning to use this to copy down all of those random, often-used recipes that are floating around my kitchen on scraps of paper or on recipe cards so stained they can barely be read.   It has a number of cute divider pages to divide the various sections of recipes.  One of them is pictured below.  How true it is! 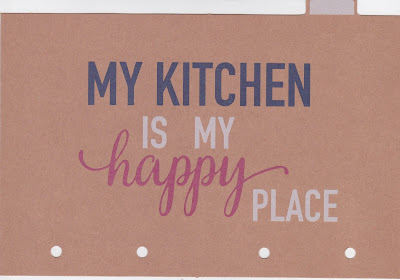 And to top it all off, she brought us a tin full of her marvelous Rhubarb Custard Pie, cut in neat pieces.  I was tickled to see that Vee packs things in tins lined with waxed paper just as I do.  I guess it's the New England girl in us!

Meeting Vee was something I'd wanted to do for a long time.  Now that we've done that, Mr. T and I are hoping we can get together with this dear friend again at some point.  We don't live that far away, and we do travel to Maine occasionally.

The whirlwind weekend held even more fun and surprises, including the hike pictured at the top of this post.  But the post is getting rather long and unwieldy, and besides, the hike deserves its own post.  So that will have to wait for another day!
Posted by Mrs.T at 5:00 AM