Picnic by the River for June 13 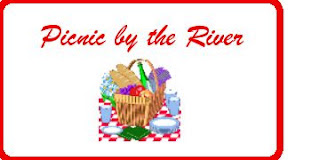 Well, this week's Picnic by the River ended up being a picnic for one at the kitchen table. After a stressful couple of days, I came home from a busy afternoon and set about preparing our picnic supper. The more I worked, the worse I felt -- my stomach felt literally "tied up in knots". I did get things ready -- Cashew Chicken Wraps and, instead of the salad I'd originally planned, Spicy Tomato Soup, since it was cool and breezy outside. (Both of these recipes can be found here in my blog, somewhere in the 2006 archives. Just type the name of the recipe into the search box, click on "Search Blog", and it should lead you to the recipe.)

After getting the food all packed up, I realized I needed to lie down for awhile and hope to feel better if I was going to make it to church. Mr. T agreed that a rest was in order, so off he went to the kitchen table for his picnic. After a 20-minute rest, I felt much better and was able to join him.

So we did make it to church, but unfortunately missed out on our picnic. We were somewhat disappointed, because we do look forward to this bit of relaxing time so much. It had been overcast and threatening rain all day, but by evening had cleared up beautifully. It would have been nice by the river. But God knows best, and I'm just thankful not to have missed the Bible study and prayer time at church... which, after all, is the most important thing!
Posted by Mrs.T at 10:23 AM