Okay, so some months ago I heard about a fun monthly blogging event called Cookie Carnival, held at Tami's Kitchen Table . Each month the hostess, Tami, sends out 2 cookie recipes for people to try and then blog about, and link to that months' Cookie Carnival. There was no pressure, and it sounded like fun, so I signed up to be notified about each month's recipes.

And every month, I haven't taken part. Either the cookie recipes didn't appeal to me, or I didn't think they would appeal to my family, or I didn't have time to do any extra baking... you get the picture. Enter the email with January's recipe links. Oh, they both looked so good! I decided I would try them both. One was Raspberry Limoncello Linzers, and the other had the inexplicable title of Two-Tone Cookie Crinkles . Oh, I get the two-tone part all right -- each sandwich cookie is made from one vanilla and one chocolate cookie. But I don't get the "crinkle" part. Not only are these not like any crinkle cookie recipe I have ever seen (they are rolled cookies, not molded), they have nothing crinkly about them. Well, maybe the fluted edges.

I had great plans to bake both of these cookie recipes -- they both seemed like the sort of thing that would be good for teas, luncheons, etc. or also for Christmas cookies. I even bought the lemonade concentrate to substitute for the Limoncello liqueur. But the month went by and the baking just didn't happen.

Finally yesterday I decided I had to do it. I hauled out both recipes and ended up deciding to only try one. The Linzer recipe called for powdered egg whites in the icing. I did have them on hand but was afraid they were old. So the Two-Tone Crinkles got the nod.

First I mixed the dough and made the chocolate ganache filling, which needed to chill. 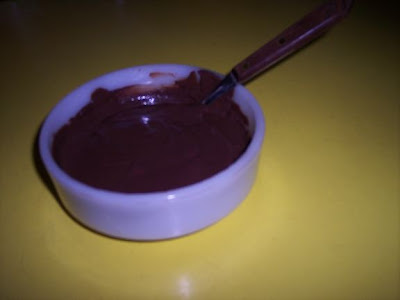 I substituted half & half for the whipping cream, which may have made a difference, but it's what I had on hand. Oh, and I used 4 ounces of chocolate chips rather than the high-quality chocolate called for. That undoubtedly made a difference. I thought the ganache turned out a bit grainy, but it tasted fine.

The recipe said to chill the dough as well, but that wasn't necessary. My dough was just a bit crumbly -- not too much to roll out, it was just about right for that, but I think the problem may have been that the egg I used was rather small.

The dough rolled out well at first, but as I added back in the cut-out shapes and the scraps, it eventually stopped rolling out well. I ended up throwing part of it away. And I also baked the remaining little cut-outs along with the cookies.

I didn't have the fluted rectangular or square cookie cutter called for (though I would like to get one, I think) so I used a fluted round cutter. I also didn't have a canape cutter so just used a small heart cutter for the center holes. 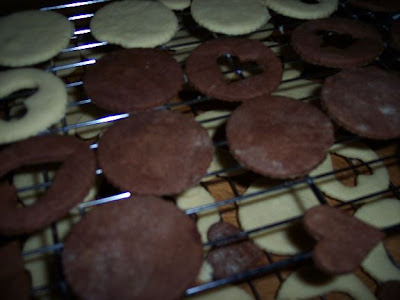 When ready to fill, I placed the plain cookies upside down on a tray. 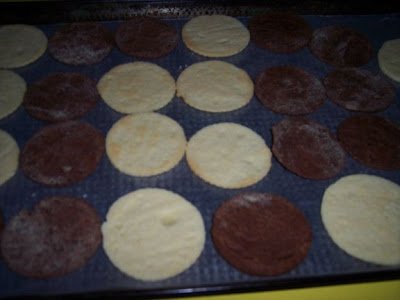 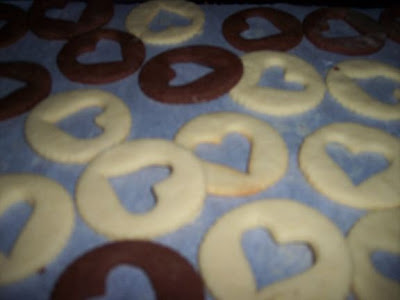 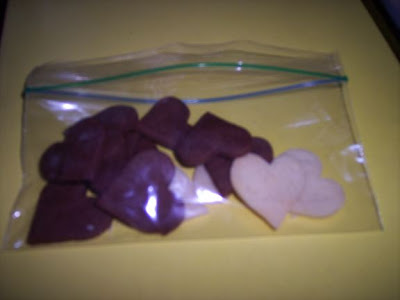 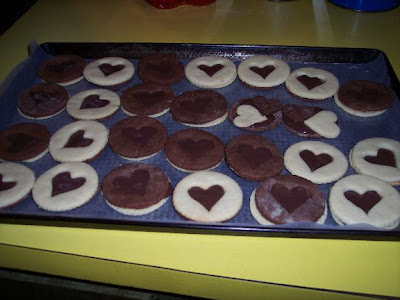 I must have counted wrong because I ended up with 2 plain cookies at the end. One of them should have been a fancy one. I ended up spreading them with ganache and topping each one with 2 of the small heart cutouts. Here's a closeup showing those. 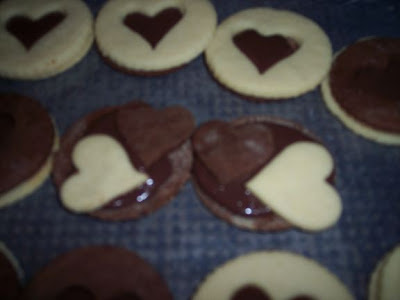 The recipe said it would produce 30 sandwich cookies and I got 26. I thought that was pretty good, considering that I had to throw some of the dough away toward the end.

Final evaluation: The cookies look pretty good and taste okay too (at least the components -- I didn't try a completed cookie, just tasted the ganache and a small heart cookie). These went over quite well at the potluck I took them to. I did try a cookie then and I thought they were quite good. Not sure if I would make them again, but I probably would. And I still don't know why they are called crinkles!

Part 2 -- Well, on Saturday morning, while I was posting the above, my 7-year-old granddaughter asked what we were making for dessert for the church potluck on Sunday. I pointed out the cookies and said we were taking those.

"You baked without me?" was the response. She also remembered that I had originally planned to try two recipes, not one, and suggested we try the second one that afternoon. So we did. Just like that, Raspberry Limoncello Linzers were on my agenda.

The dough was easy to make and easy to work with. I didn't need to refrigerate it to be able to handle it, but I divided the dough into quarters and we worked with one quarter at a time, leaving the rest in the fridge. By working with only a quarter of the dough at one time, I hoped to avoid having to throw any of it away. But that didn't happen. I found I could roll it out and cut once, then gather up the scraps and roll it out only one more time successfully. After that, the dough wouldn't hold together. So I was really thankful I had thought to divide the dough and only work with one portion of it at a time. 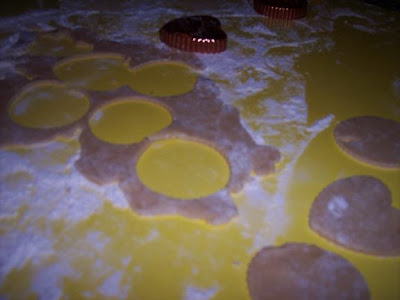 When cleaning up the counter, we found a perfect heart shape in the flour. 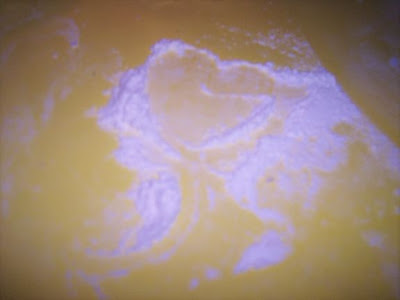 Here are some of the finished cookies cooling on the racks. The recipe said it would make 2 dozen, but I got lots more... probably 3 to 4 dozen. I forgot to count them. 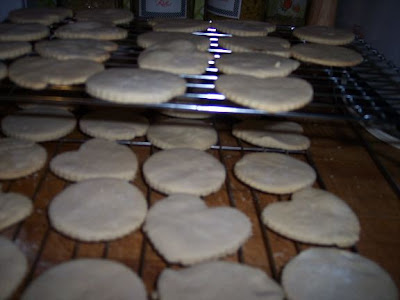 The recipe called for boiling the seedless raspberry jam and bringing it to a certain point on a candy thermometer. I skipped that step, as what I had was raspberry preserves (not seedless) and they seemed plenty thick enough already to me. I am not sure, maybe the boiling step would have made the jam less sticky, but that thought was in retrospect. Here are the cookies ready to fill. 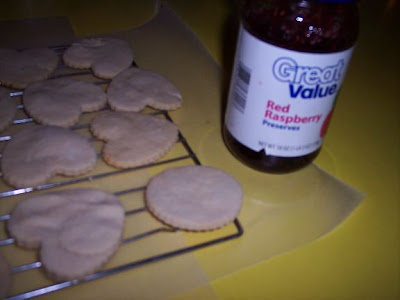 I put about a half-teaspoon of preserves on each cookie and spread it around. 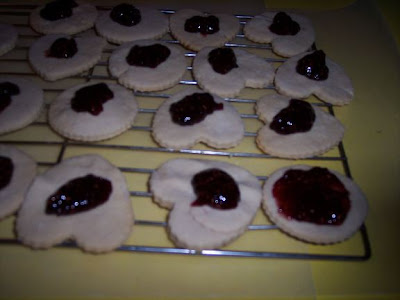 Here they are with the jam filling all in place. 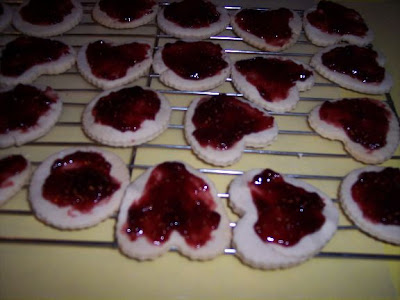 Then I made the lemon glaze. I made only half a recipe of the glaze, since in my experience glaze recipes always seem to make too much. This turned out to be a wise move; I still had glaze left over. I used lemonade concentrate in place of Limoncello liqueur. I added the lemon juice called for but skipped the rind. The glaze was plenty lemon-y as it was.

I got the glaze just a tiny bit too runny, but it was really hard to tell until I began drizzling it on the cookies. I thought they looked fine anyway, and it seemed to me that the more glaze over the jam, the less sticky the tops of the cookies might be, since the glaze was supposed to set. 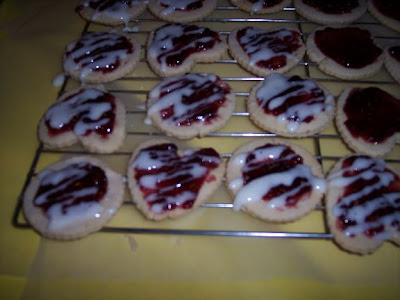 You were supposed to let the glaze set up before attempting to cover or store the cookies. I let them set around three hours, I think, and it finally did set nicely. 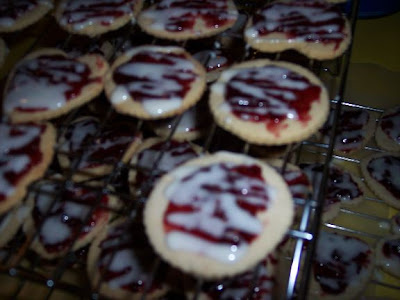 But I found that the minute I placed waxed paper over them, they became like magnets for the waxed paper. I was even chilling them in between adding the layers of waxed paper. Finally I placed a layer of cookies on a large tray (for the potluck) and, because I simply had to go to bed, placed a sheet of waxed paper very, very loosely on top. Predictably, in the morning, it had settled down atop the cookies and stuck to them. I carefully peeled it off. Most of the cookies looked fine. Those that didn't, I drizzled a little extra glaze over. Needless to say, when transporting them to the potluck, I did NOT cover them.

Final evaluation -- these cookies looked quite pretty and tasted fine, but not outstanding. The lemon glaze was the best part. The cookies themselves (containing both pure vanilla and almond extract) were sort of bland. I think they might have been better with some lemon rind added to them. Would I make them again? Probably not. And I still don't know why they are called Linzers, which in my experience are usually a sandwich cookie and nearly always seem to have some chopped nuts in the dough. It was a fun and interesting experiment, anyhow.
Posted by Mrs.T at 12:31 PM