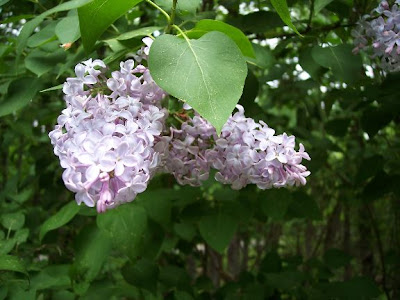 When I was growing up, my parents had some pretty lilac bushes and so when we established our own home, Mr. T and I wanted to plant some, too. We ended up transplanting some from my parents' summer place, where there was a huge hedge of lilacs near an old stone foundation. For years, our lilacs did not bloom; then, a few years ago, one or two blossoms appeared. Each year we see more and more flowers, and the bushes themselves are spreading, too.

I think it is so fascinating how lilacs are so often found beside old cellar holes and crumbling foundations. Even out in the woods, lilac bushes can be found blooming in such surroundings. People planted them by their houses and now, even though the houses and outbuildings have long since disappeared, the lilacs continue to bloom. Writers have written eloquently about this:

"Lilacs are in bloom now ... They bloom in almost every dooryard. In fact they bloom where there is no longer a dooryard. Often only a stone chimney may be left where a house once stood.

"Who lived here? ... Did they build the vanished house for future generations? If so, why was the place abandoned? Lovingly it could have been rebuilt on the same site, for the ancient stone foundation is here. Never mind, the secret belongs to the long ago, and we must not disturb it. It is permissible to gather a few lilacs in memory of those who planted them."
~ Gladys Taber, The Stillmeadow Road

And Still the Lilacs Bloom

'Twas not by chance the lilac fair
Became New Hampshire's flower,
For it was hardy like the folks
Who grew it by their bower.

The farms were passed from sire to son
Who loved this land and nation;
And lilacs were a part of home
To every generation.

Years passed, until the farmhouse old
Fell slowly in decay,
Yet lilacs by the rotting walls
Still bloomed along the way.

The ones who planted yonder bush
Are now within their tombs,
But still beside the cellar hole
The purple lilac blooms.

As though in tender memory
Of those they would recall
Each year the fragrant lilacs bloom
Beside the garden wall.

No fairer tribute to the dead
Can we in love display
In cemeteries through the land
Upon Memorial Day.

Though gnarled and twisted by the storm
As generations toil;
Forever may the lilacs bloom
O'er dear New Hampshire soil.
~ Wilfred Tatham, Musings by a Mountain Trail 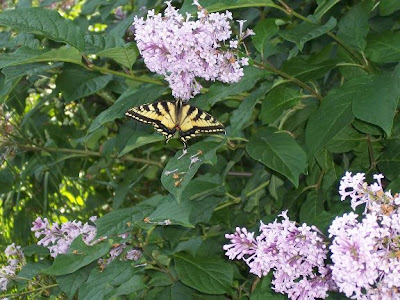 I love our lilacs and hope they will continue blooming and thriving for many years to come. They are such sweet old-fashioned flowers!
Posted by Mrs.T at 10:35 AM