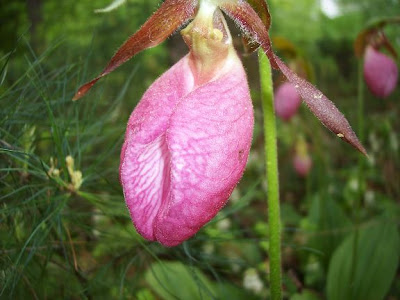 Last weekend Mr. T got some wonderful photos of our pink lady's slipper flowers. I thought it would be of interest to share not only the pictures, but also what my Wildflowers of North America book (by Robert Lemmon and Charles Johnson) has to say about them:

"Pink Lady's Slipper, Pink Moccasin, Stemless Lady's Slipper, Two-Leaved Lady's Slipper, Squirrel Shoes, Noah's Ark, Whip-poor-will shoe -- all these common names and probably more are applied to this woodland plant. It is perhaps the most common, widespread and at the same time the crankiest member of its genus. To illustrate:

"You may find it flowering in May and June from Newfoundland through New England and on to North Carolina. From this general line it extends west to Tennessee, into the Mississippi River region and Manitoba. Bogland, damp woods and dry rocky ones -- all are acceptable homes for it. And yet it is notoriously difficult to transplant successfully into some new spot which seems to be perfectly suited to its needs. It may appear there by itself, probably by means of stray seeds, and become well established. But that is another mystifying story.

"This baffling, unpredictable Orchid rarely grows in close colonies. You may find several plants within a square yard, but as a rule they are more widely scattered. It is almost as though they resented crowding." 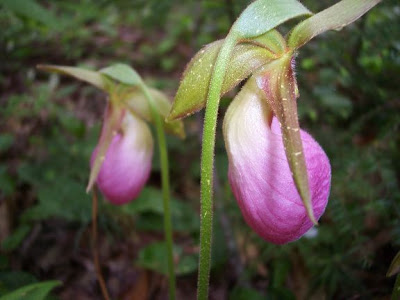 Who knew they had so many common names? I was only familiar with the first two. Some of the names surely are whimsical. 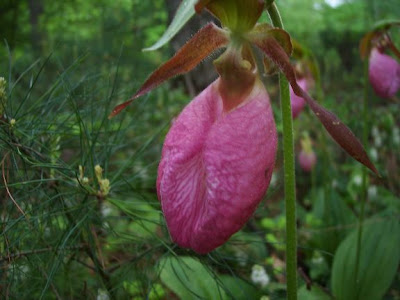 I can also vouch for the fact that these plants are unpredictable. When we moved here, we had large groups of lady's slippers in our woods. Over time, the groups seemed to get smaller and move around from place to place in the woods. We tried transplanting a couple of them to the wildflower garden, where they thrived for a few years and then disappeared.

This year, they are in a slightly different place still -- in fact, at the edge of the woods quite close to the road. Some are light pink, some are dark pink. 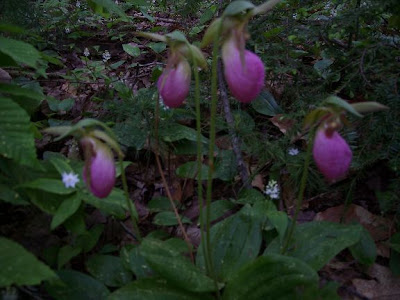 Some are solitary, some are in small groups, like this one of four. 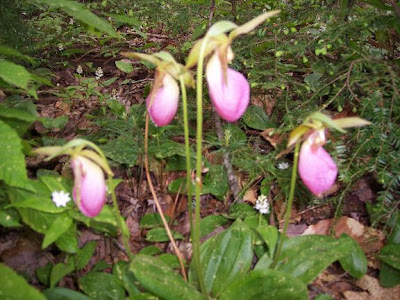 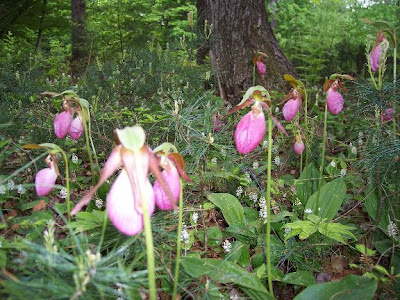 Do pink lady's slippers grow in your area?
Posted by Mrs.T at 12:06 PM