Wow, where to begin in posting about my wonderful weekend at The Wilds of New England?

This was billed as a mother and daughter (and grandmother too) retreat.  I believe it's the first one that TWNE has offered in this category.  Girls as young as 6 could go.  It was a mother/daughter/grandaughter retreat for me.  My daughter Carrie went, and her 10-year-old Julia.   And then my oldest granddaughter Sarah, 15, my son's daughter, went as well.  We traveled to the retreat with Patty (Carrie's pastor's wife) and her 7-year-old Jen.

I couldn't resist snapping the picture below as we got settled in our van. 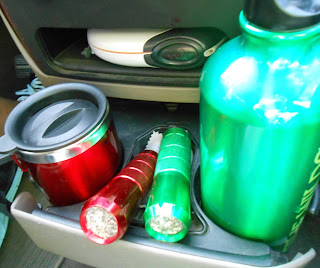 I had pulled out two flashlights and placed them on the cup holder so they wouldn't get forgotten in the van when we unpacked it. Before leaving home,  I had set my green water bottle in one side of the cup holder and when Patty got in (she was driving),  she set her red mug of tea on the other side.  Wow -- I thought it was so interesting how the drink containers matched the flashlights.  I'm easily impressed ...

After getting unpacked and settled in our cabin -- we ended up all together, which was fun -- we headed out for the coffee shop as it was still quite awhile before supper.  I got a raspberry Italian cream soda and Sarah a strawberry smoothie.
All three girls also spent time in the game room with friends during the time before supper.
Supper was delicious!  We had ham, sweet potato casserole which was incredible, green beans, and rolls.  Dessert was cupcakes -- moist spice type cupcakes with a whipped white frosting sprinkled with cocoa.  Pretty as well as tasty! 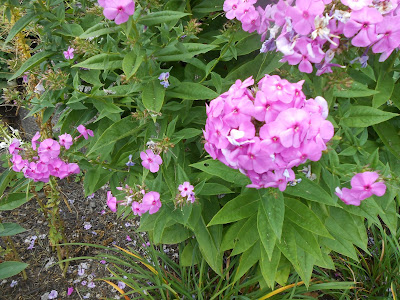 The fun time was hilarious, the worship time meaningful, and the message was wonderful -- reminding us that the foundation of our security is our relationship with God, being eternally secure in our salvation.  The topic of all three messages (Friday night, Saturday morning, and Saturday afternoon) was Security Breach. 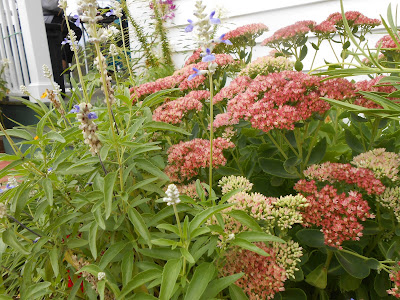 After the service, we went to the Sweet Shoppe for pumpkin nor'eastahs (like a flurry or blizzard) and after that we went on a nighttime hayride.  Fun!
(I'm interspersing a few of Sarah's photos as I go; I didn't get many pictures myself but I asked her to take some of the flowers and plantings.)

It was a late night; I optimistically set my alarm even though I seldom sleep well in a situation like this.  Didn't need it; I was up and in the shower by five.  I went down to Cool Beans and had my quiet time sitting on the porch.  I watched a glorious sunrise!

As soon as the shop opened I went in and got a large hazelnut coffee.  Breakfast was not until 8:15 or so.  When Carrie and the two girls were ready we returned to Cool Beans and got hot chocolates for the girls and a salted caramel latte for Carrie. 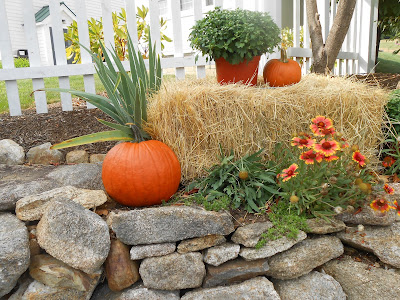 Breakfast was pancakes, sausages, and peach slices.  It fueled us for a busy morning with more music, a good message concerning our social insecurities and how they need not define us because God has made us for a purpose.  This was followed by our personal "God and I time".  After that we had a bit of free time before lunch.
Lunch was make your own sandwiches with croissants, sliced cheese, turkey and tomatoes, and lettuce.  Chips and broccoli cheese soup were served alongside.  After lunch -- more free time!
We went on a longer hayride and then sat on the porch of Cool Beans to watch people riding the zipline.  None of us tried it.  Julia and Jen are both too small for the weight limit.  They went to the Mystery Mansion and played laser tag instead!

Patty and I did quite a bit of crocheting, and somehow more Italian cream sodas and smoothies were consumed!  Also during the afternoon, Carrie, Sarah, and I attended an optional question/answer session with our speaker, Sarah Hudson, and Rand Hummel, director of TWNE.  This optional session was very informative and we were glad we had taken advantage of it. 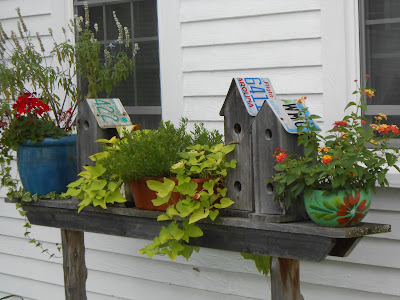 At 4 pm it was time for the final service and message.  Wonderfully encouraging.  This session had to do with finding our security in the promises of God. 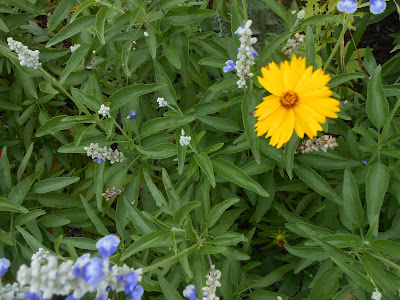 And then supper -- chicken cordon bleu, pasta with cherry tomatoes, salad, and rolls.  Dessert was a fabulous caramel apple cheesecake.  Then it was time to head home. 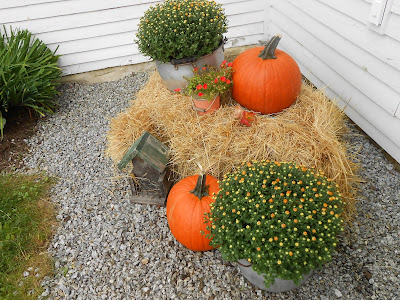 As Sarah remarked after we had dropped the others off, it seemed as if we had been away much longer than a day and a half.  It was true; it was that refreshing!  I pray that the scriptural truths we were reminded of and encouraged in will stay in our hearts for a lifetime.
Posted by Mrs.T at 8:23 PM