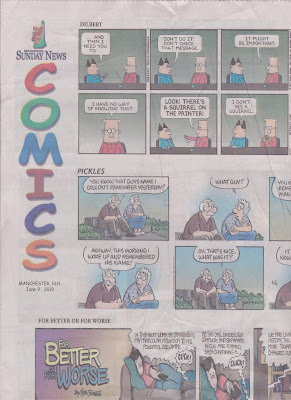 Yes, it is Wednesday again, and time for the Wednesday Medley hosted by Terri at Your Friend from Florida.  This week's questions have to do with National Garfield the Cat Day, which is today.    Want to write a fun, light blog post this week?  Just head on over to Terri's and get the the questions to answer them on your own blog.   Here goes:


1.  If you have ever followed the Garfield comic strip, you know Garfield loves lasagna.  What is your favorite Italian food?
Hmmm, my favorite Italian food.  That is a tough question.  I enjoy pizza, lasagna, stuffed shells, spaghetti and meatballs, calzone, and more.  Don't think I can pick a favorite.
Do you over-indulge when it comes to pasta?
Possibly on macaroni and cheese.

2.  Tell us about your very first pet.  If you have never had a pet, can you tell us about an animal that touched your life in some way?
When I was young our family dog was supposed to be my brother's pet.  But Queenie captured everyone's heart.  She was fearless but occasionally lacked common sense.  The amount of porcupine quills pulled from Queenie's face over the years was very surprising.  It seemed that she never learned.  In her later years, she became very much my dad's dog, riding shotgun in his pickup whenever possible.
3.  Garfield sleeps his day away, only waking to eat or sweet talk his girlfriend Arleen.  How many hours sleep do you normally get each night?  How much sleep do you really need?
About 7 hours of sleep seems ideal for me.   That's usually about how much sleep I get.  Sometimes a little less. 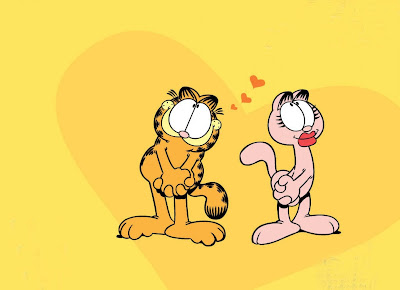 4.  Garfield lets the mice in the house have their way.  When was the last time you had to chase out a little varmint?
At my dad's a few months ago.  Actually, it was nearly dead already.  However, my most recent mouse encounter was a few nights ago when I was innocently descending the cellar stairs to do some laundry. I was four or five steps from the bottom when a mouse came hurtling out from under the washer, seemingly straight at me.  Of course, he was really diving for cover under the stairs.  And then, from under a retired freezer I use as a pantry -- at right angles to the stairs -- another mouse came rushing toward me.  Two mice in less than 30 seconds was a little much, I thought.  Mr. T set a mousetrap, but it hasn't been touched.

5.  Garfield also loves his teddy bear Pooky. Did you have a favorite stuffed animal when you were young (or now!)?  If you didn't or don't, what about someone you know?
I'm sure that I did have one, but can't remember right now.  One of my daughters had a large pink bunny, simply called Bunny,  who went everywhere with her.  One time when Bunny was left behind at church, our pastor and  his wife made a special trip to deliver him.  They knew Bunny was pretty important to a little girl's being able to sleep that night.

6.  Please tell us something about your week, so far!

I completed a gigantic project of sorting recipes.  See previous post for the details.  So good to have that done.

And there is this week's Wednesday Medley!
Posted by Mrs.T at 5:00 AM