A delicious and easy summer side dish 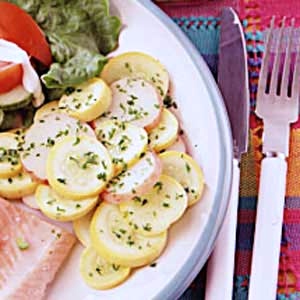 I've been meaning to share this one for a few  weeks: Summer Squash and Potato Saute.  I may have blogged about this recipe in a previous summer.  It's a good summer side dish to know about -- great with fish, chicken, or even a grilled burger or steak.

Recently, though, I tried a spin on this recipe that makes it even easier.  I had purchased some yellow summer squash and zucchini, and had thought to make this side dish with them.  But I also had on hand some microwave-ready potatoes in the Savory Herb flavor from the Little Potato Company.  So I decided to incorporate them into the saute. 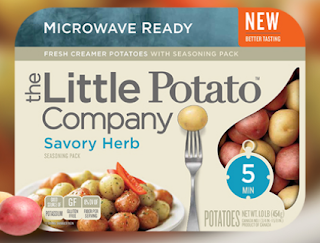 I just sauteed the sliced squash in olive oil until crisp-tender, then microwaved the potatoes according to package directions.  When the standing time had elapsed, I stirred the potatoes into the skillet with the squash and heated the mixture through quickly.

It turned out to be quite an inspired idea.  I liked the saute even better with the small whole potatoes than with the sliced red potatoes which the recipe calls for.  And the savory herb flavor was wonderful with the squash.   I have since tried the Garlic Parsley flavor in this recipe and it is also delicious.

Have you tried the products from Little Potato Company?  I had actually never heard of them until a few years ago when I won a giveaway featuring them.  I haven't tried all of the available products, but I can say that the microwave-ready potatoes with seasoning pack are absolutely wonderful.

Of course, you can make this recipe as originally published.  But if you want a quick and easy side dish that will use up some of that zucchini and summer squash, you may like to try this variation as well.  I don't think you will be disappointed.